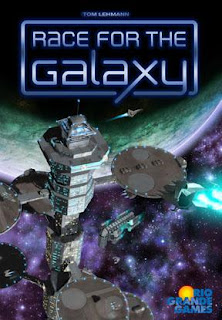 I play a lot of games. That probably goes without saying - I mean, I review three games a week (unless I'm ranting, or running a contest, or just posting lame-ass filler because I'm completely unprepared or too tired to write anything - but those don't happen more than once or twice a month, so I think we could probably average it out to about three a week, give or take). I play every game I review, so I'm a busy gamer. And one thing I've seen, for the most part, is that most games fit relatively neatly into a 'you might like' or 'you might not like' division (except for games that outright completely suck. Those get their own category, called 'any reasonable human will agree that the creators of the game should be forced by court order to stay away from games completely'). Usually, when I finish a game, there's a consensus at the table - good or bad, most of the time, we basically agree.

Race for the Galaxy, however, is a lot more difficult to nail down. This is one of those few games I've played where two of us were having more fun than a box full of coked-up monkeys with a water balloon full of strawberry jello, and the other two were just hoping against hope that the pain would end soon so they could do something more fulfilling, like organizing the silverware drawer.

The game is all cards, but the funny thing is, it doesn't really feel like a card game. I mean, yes, you draw and discard and play cards and stuff, but you don't do things like counting cards or ranking or collecting sets. You don't move around a board, and you don't stack wooden resources so that you can efficiently trade them for cash, and you don't even roll any dice, but it still feels more like a board game than a card game, despite not having a board and being basically a box full of cards.

The reason Race for the Galaxy doesn't feel like a card game is because while it uses cards to play, you don't do the normal stuff you would do with a card game. You build properties, and trade goods, and conquer planets and generate resources and a whole lot of other stuff that seems like it ought to be in Settlers of Catan, but it couldn't be, because like I said, there's just the cards.

Race for the Galaxy uses a play mechanic that is starting to show up more and more, ever since Puerto Rico ruled the BGG pop charts like Thriller (in case you're too young to get that, Michael Jackson had a huge hit with Thriller, back in the early 80s, when he was black. In case you're still too young, Michael Jackson used to be black. In case you're really, really young, don't let that scary looking guy with the pet chimp give you any candy). It's that thing where players choose actions, and then everyone does the action, but the guy who chose the action gets a bonus. So if you explore to get more cards, everyone can draw two and keep one, but the guy who played will either get to draw a whole lot more or maybe keep two. When you produce goods, everyone gets to produce, but the guy who played the card gets to produce more. But unlike many games like this, if nobody chooses an action on a particular turn, it just doesn't happen, and since everyone chooses their actions at the same time, it's entirely possible that only one thing happens during a turn. You might have a turn where no planets are settled, or no developments are created, or no goods are produced, or nobody has any fun (except those of us who think Race for the Galaxy is just about the best game we've played in months, which I do).

The point of the game is to settle planets, build developments and trade goods, all of which will earn you victory points, unless they're the short-term trade-off cards that get you a quick fix and then aren't worth a hill of beans. There are planets that produce expensive goods, and planets that can spend those goods. There are developments that beef up your armies, and developments that make you ridiculously good at diplomatic peace. In fact, with all the different bonuses and point differentials and every other danged thing, there are about a bazillion different ways to win (for you math geeks out there, one bazillion is approximately equal to a quarter jillion, but only if you're converting using the English system. The metric conversion makes a lot more sense, but God-fearing Americans don't use metric).

The nitty gritty basics of Race for the Galaxy can be explored at nauseating length by reading other reviews, but a few basics may help you decide if this would be up your alley or if you would rather just play Talisman again. For starters, the thing to understand is that when you pay for a planet or development, you discard cards to equal its cost. Military planets can't be purchased this way, though - you have to have a big enough military to conquer them, which you get from some planets and developments. Some planets produce goods in one phase, and you can sell them for more cards or victory points in a different phase, if you have a planet that can consume the goods you produce. There's lots of planning, spending cards like cash, and a fair amount of good, old-fashioned gambling. If you really need to trade this turn, but you also want to recruit some space marines, you're going to have to hope someone else plays the other action - so do you play the trade action to get the cards to pay for the marines, or do you do the development action to build up your armed forces and bankrupt yourself, hoping that someone else really wants to trade?

One reason that I love Race for the Galaxy is that it's actually got an incredible amount of theme working. You really do feel like you're developing a galactic consortium, or conquering the galaxy one planet at a time. You can search for alien worlds or establish enormous trade franchises. You might defeat the rebels, or build a Pangalactic senate. If you're really good, you'll do more than one of these, and you'll be so impressed with yourself that you'll want to celebrate with good friends.

Unfortunately, half of your good friends are likely to want to punch you in the face if you ask to play Race for the Galaxy (unless your friends are a little less violence-prone than mine are). While I absolutely adore Race for the Galaxy - in fact, I think it's the most fun I've had playing a game since Formula D - there are lots of people who are not going to enjoy it at all. The rules can be confusing, especially the trading rules, and the little symbols the game uses to describe the various effects of planets and developments can start to run together in your head until every time you see a blue box, you'll just want to punch a kitten (if you're one of those erudite super-gamers who can grasp every detail of every complex game the first time you read them, and who always says, 'well, I understood the rules just fine', please shut up. I understood the rules, too, but not everyone does, because they ARE complicated and the symbols ARE confusing. I just read the rules three times before I played).

I can't actually give a blanket recommendation for Race for the Galaxy. I love it, and would play it nearly any time - heck, I wish I playing it now - but too many people are going to be bored, confused, and frustrated. There's not a lot of player interaction, outside holding cards other players might want or trying to outguess which actions they might need, and there are lots of people who won't like that at all. But if you like a lot of thinking and a ton of options, and you aren't intimidated by lots of symbols and some slightly difficult rules, you might think Race for the Galaxy is just about the most fun you could have with your pants on.

Pros:
A card game that feels like a board game
An incredible number of effective strategies
Lots of balancing short-term versus long-term gains
Really entertaining art
A fantastic amount of theme for a card game
Symbols speed up the game immensely, once you understand them

Cons:
The rules are not intuitive until you've played - and still might be confusing afterward
Symbols are confusing as hell until you understand them

I am absolutely delighted to report that Dogstar Games does, in fact, carry Race for the Galaxy. Better yet, they have free shipping. Better yet, when you buy from them, they get all excited and keep giving me games, which lets me review stuff you request. So if this seems like your bag, go here and get a copy:
http://www.dogstargames.com/product/RIO301
Posted by Matt Drake at 11:28 PM

This game sounds a bit like San Juan. As I liked San Juan quite a bit, this game is now on my wishlist.

From what I hear, this game is very similar to San Juan, but I've never played San Juan, so I can't say for sure. Both are Puerto Rico spin-offs - attempts by the designers to make a card-based version of Puerto Rico. It's kind of funny, actually, because Puerto Rico bores me to tears, and I flat-out LOVE Race for the Galaxy.

Got this for my B-Day so thanks for the review. I also have read the rules like a million times and am still having trouble!

Nice review as usual Drake. One comment on your example....If you want to trade, you generally need to choose it yourself. If someone else chooses it, you just get to consume unless you have a fancy-pants power somewhere in your spread (I love the game, but hate calling my cards in play a "tableau"). Just wanted to point this our so someone who is unsure on the rules won't be confused, as the trading phase is one of the trickier bits of the game.

Ok, I've played this twice since I last posted.

The first time I played, I found myself having a near panic attack from the sheer amount of information I had to process on the cards - it took me half a game to figure out what I was doing, and I ended up losing.

The next game was a lot more fun, and most of the folks in my crew now have a decent grasp of the rules and cards, and we're looking forward to playing again with some of the expansion cards.