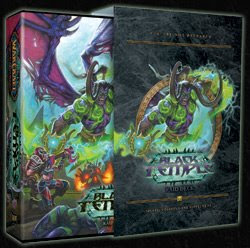 A couple weeks ago, I reviewed the World of Warcraft TCG, which is unfortunately costing me a ton of cash these days, and taking up an inordinate amount of my time. I mentioned that I thought raid decks were cool, but didn't really expand on them, because they're so awesome they require their own review. So before much more time slips away (and before everyone quits playing the WoW TCG to move on to the next big cardboard time/money suck), here's a quick write-up of the coolest thing to happen to collectible card games since Magic.

If you play collectible card games, you're almost certainly aware that many of them can be played with multiple players. These are almost always team affairs or a sort of deathmatch mode, where everyone is essentially on equal footing. Some of my favorite games of Magic (back in 1993, when the game was new), were five-player games where we each played a different color, and you had two allies and two opponents, and you won when everyone got too tired because the game lasted like three hours. But like Virginia Slims, we've come a long way, baby.

Raid decks are an all new way to play a multiplayer CCG. They're particular to the World of Warcraft TCG, but that won't be the case for long - sooner or later (probably sooner), some other publisher is going to create all-against-one decks that totally piggyback on this idea. It's sort of like how right after WizKids made the pirate game where you built ships out of reprinted credit cards, and then out of the blue, Wizards is making a Star Wars thing with spaceships you make out of reprinted credit cards. Or the way Wizards invents the collectible card game and then everyone on the freaking planet is making one, including Upper Deck (the people who make this game). So I guess there's kind of a people-who-live-in-glass-houses thing, and we can't really blame some other publisher when they come up with total rip-off concepts (though it will make me a little angry if Wizards tries to patent the idea).

Raid decks simulate the part of the online game where you get a bunch of friends you haven't met together in one place that doesn't exist so you can send your digital heroes against some preprogrammed supervillain to win electronic weapons so that you can beat up other virtual bogies, or just gank other people's guys. Only in the card game, you get actual friends around an actual table in your actual house, and the raiders each have a regular deck made from all those expensive cards you own, and you have this special deck that can totally beat the crap out of them.

These raid decks are incredibly impressive. In a straight one-on-one brawl, there's no way a standard deck could beat a raid deck. They're not even remotely fair. It would be like a Hulk Hogan versus Stephen Hawking cage match (which I am hesitant to admit has a certain twisted attraction). So if you're going to go after a raid deck, you'll need friends.

Normally, three players would face off against a raid deck, but normally, you would also have a whole bunch of cards and be really good at the game. If you're new to the World of Warcraft TCG, you may not even understand how much you suck until you've played against a raid deck. You can build three decks that you think are fantastic, just to spend four turns in a row watching everything you play crumble to dust while the bad guys laugh at you and body-slam you out of your wheelchair.

Take, for instance, Magtheridon's Lair. In this raid, your intrepid heroes have to mount an assault on a bunch of evil channelers who have this creepy devil dude chained up, using his blood to power their spells. First you have to beat the channelers, and honestly, they're not that much trouble. But then when you beat them, Magtheridon himself is unleashed, and holy CRAP does he deliver a beating. He'll clothesline you right out of the ring and beat you with a metal chair until you're just lying there saying, 'help. help.' in a raspy robot voice.

But not every raid deck is the same. For instance, Magtheridon has a couple allies he can summon, but for the most part, he's flying solo. Onyxia's Lair can break off a bunch of irritating whelps, but otherwise the black dragon pretty much fights on her own. The Black Temple and Molten Core decks, on the other hand, have several difficult minions and villains who get a lot tougher over time. It almost feels like you're vanquishing one boss monster after another, and a surprisingly cool story-telling aspect develops over time.

If you're very good at the TCG, the raid decks might not offer a whole lot of challenge for you. But if you're new to the game, or just kind of suck at it, they can be really damned hard. Happily, you can take the edge off a little by adding another player or two. For instance, our raid players got totally destroyed by the Black Temple, and then took a pretty painful beating from The Molten Core, before they just added a mage and built decks to be cooperative. Then they killed Magtheridon without losing anyone, and they're looking forward to taking a shot at Onyxia's Lair.

One of the reasons these raid decks are such a draw (beyond being a really fantastic way to play a CCG) is the treasure cards. If your heroes can manage to tag-team the big boss to death, they can open the foil-card treasures (or they can just open them anyway, totally defeating the purpose of their existence, but that wouldn't be nearly as much fun, would it?). These are some of the most amazing equipment cards in the game - super-powerful stuff made for a variety of deck types that will make nearly any player drool. I don't even know if they're tournament legal, and since I don't play tournaments, I don't care. Our players are all excited to include these totally bitchin' weapons in their standard decks, though, and so they can't wait to see what they can find if they could just get past those fire demons in Molten Core.

If you're already sinking hundreds of dollars a week into the World of Warcraft TCG, you might as well divert a couple bucks to try out a raid deck. If nothing else, you can get your mitts on those cool foil treasure cards, and if you can find a loot card to sell on eBay, you can even justify the purchase to your wife when she asks why you keep spending all the grocery money.

Cons:
Can be really hard or really easy, depending on your players and their decks

You can buy raid decks pretty much anywhere that sells the TCG. Try Amazon. They've got some decent prices.
Posted by Matt Drake at 12:11 PM