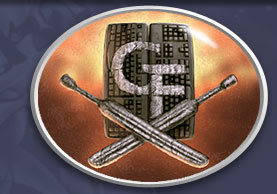 I'll be the first to admit that I write reviews for the free games. It's a pretty decent racket, too, except when I get a box full of crappy games that I have to play anyway. I don't know why, but it seems every third game I get in the mail is a dull Reiner game where you do a lot of math.

But you may not want to spend hours every week writing boring, unreadable tripe about games that suck just so you can save a few bucks, so you may want to find an alternative method of procuring games. For most people, that alternative method is to just pay for them, and in all honesty, that's probably the ideal method. You get to be a lot more choosy about your games when you actually buy them instead of just relying on marketing departments to overcome their common sense and send you free stuff just so you can compare it to dog puke.

Diving Dragon Games, however, thinks there's yet another way - get someone else to pay for the game. They have a wacky semi-collectible card game that is almost entirely funded by advertisers. Every game card features an ad, so you might be playing the game while you look at an ad by those weird guys who make swords based on video games and pointy ears so that nerds can look like Spock (if Spock had acne and a fat suit).

For an idea like this to work, the game has to be pretty good. People pay good money for a game and still quit if it sucks, so how much patience can you hope to see if your game is free? That's right, about none (unless it's going to a reviewer, who you hope is willing to give it a fair shake even if it was a freebie, which is why you probably don't send me games). So Geek Fight (that ad-funded game I just mentioned) needs to have some chops if it hopes to work as an advertising venue.

Right out of the gate, Geek Fight looks pretty good. The cards are all the size of business cards, but printed on really thick stock with a very nice laminate. Expenses were not spared on the printing. The art may have saved a few bucks - it appears to have been created by a variety of artists whose talent falls somewhere on a spectrum that starts with cheesy low-budget RPG artist and goes all the way up to slick but undiscovered genius who probably smokes too much weed to get off his ass and send out his portfolio already. But the deciding factor here is the theme.

As you might have guessed from the name, Geek Fight is about nerds who beat on each other. It plays to every bizarre and irritating gamer stereotype ever, including the smelly nerd, the random anime cosplayer, the gaming wannabe with too much cash, and the asswipe convention security guard (and if you've ever been to GenCon, you know every one of these is based on actual people. Especially the dickhead rentacop). The idea is that you're at a con, and you have this team of nerds, and you decide to beat up this other team of nerds using stuff like overloaded dice bags and foam swords, and they'll fight back with horrible armpit stink and concession stand hot dogs.

Now, this might be exactly your cup of tea. You might think a game about nerds beating up nerds is incredibly clever. And it sort of is, but being a nerd myself, I would have loved the game if it were about space rangers killing aliens or goblin defenders repelling the dwarven menace. See, I'm the guy the game mocks, and while I'm a huge fan of self-referential humor, I'm actually a much bigger fan of the games that are played by the guys that the game mocks. The theme just doesn't grab me, and that's the first strike on Geek Fight.

At least the rules are pretty straight-forward. You have to have exactly one fighter in the ring - when one gets beat down, you bring out another, and if you can't, you lose. You attack every turn, subtracting your strength from your opponent's health. You can spend resources to bring out weapons and use tactics, and some things work better with some fighters, so you can sort of build your mini decks to take advantage of their strengths. It's pretty basic, really, and I think that's a second strike.

See, I like a game where you can be tricky as sin, where you concoct the perfect brew of heinous misdeeds ahead of time to lay low your foes, where no decision is an easy decision. But in Geek Fight, the decisions are generally pretty obvious - you have to attack, and it's not like there's a reason not to swing. If you have stuff in your hand that you could play, you probably should, so that you can get the bonus. Opportunities to be conniving are few and far between, and that means that to be really interesting to me, the game would need to fall back on a great theme... except I don't really care for the theme, which meant that Geek Fight got stale on me after I played it three times.

But you're not out on two strikes (to flip over to a baseball euphemism instead of a gamer metaphor), and Geek Fight does at least get a base hit. The game isn't totally intolerable, just a little uninspired. The theme may not include zombies (as anyone knows, zombies make any game better), but it's fairly amusing. And the idea behind the game is pure genius. In fact, the concept is the saving grace here. Watch - five years from now, every major game publisher will have an ad-supported game, and ads will go for seriously rich cash, and Geek Fight will be a huge collector's item, with full sets going for hundreds on eBay.

So give it a shot. Take a look. See what games are going to look like when your kids are out of high school, and at least take the damned thing for a spin. You might like the theme, and it might be a great little filler game.

And hell, it's practically free.

Pros:
Some decent gaming concepts
Ad-supported gaming could be the wave of the future

Cons:
I don't dig the theme
Gameplay not particularly compelling

Seriously, it's like a dollar. Give it a shot:
http://www.divingdragongames.org/shop/
Posted by Matt Drake at 7:17 PM

Don't worry, they super tricky variant is coming soon. I do agree that at demos I have gotten to the "I hit you, your turn" scenario.

This should interest you, people in the northeast have started playing Geek Fight in between rounds at WoW TCG tournaments. lol

Sounds like a fun enough theme, would be funny to play it at GenCon I think. I figure it might be a nice filler for friends who are not gamers to let them know how much of a geek you are, and it lets you tell Con Stories the whole game long?

My life is changed after that, the relationship with the young man had changed greatly in the best possible way. It's frightening to imagine how I behaved with him before and what would happen if you do not read a book and articles.