Board Game Review - Age of Steam 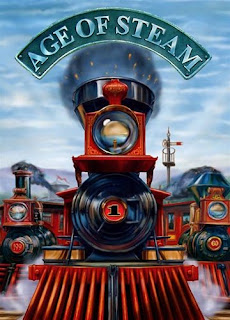 Warning - this review contains more bathroom humor than normal. I mean, more than normal for me, which is a lot of bathroom humor. It might end up being a little bit gross. If you whine afterward and say something like, 'dude, you're sick, and you need help, and I'm mad at you' - I'm warning you right now, I'm just going to laugh because you were dumb and kept reading.

About five years ago, I worked with a guy who regularly used the phrase, 'taking a steam.' This phrase did not refer to a person enjoying a sauna like a mafia boss or porn starlet, sitting in a wooden room wearing just a towel, waiting for either a hitman or another girl (one of whom would be carrying towels and have a gun hidden, and the other would be about to drop her towel). No, 'taking a steam' was the work-friendly term he used to describe visits to the bathroom that required a longer-than-usual stay, and sometimes a little Lysol air freshener.

Now, if you know anything at all about Age of Steam, you know it has nothing to do with smelly bathroom visits. However, having spent years of my life referring to extended bathroom trips as 'taking a steam,' I have been chuckling quietly every time I heard about a train game that sounds like the world's longest bowel movement. I mean, a ten-minute steam is one thing, but one that takes so long they name an age after it? Don't anyone light a match!

Of course, Age of Steam is about trains, not poop, so the grade-school joke runs out pretty fast, especially if you haven't been calling your toilet visits 'steamers'. You might be thinking that the reason I started out with that 'taking a steam' story was to say that the game stinks, but not to worry - I think it's a blast. And not like a nasty, spend-the-afternoon-in-the-can blast, either. I just wanted to share some crude humor.

If you only play a couple turns, you might get the impression Age of Steam is a really hard game. Early on, you'll probably have to issue shares every turn to have the money to expand, and then all the money you make will go into paying for the shares. If you're aggressive, you'll be broke, and if you're not, the other tycoons will grab up all the sweet routes and you'll be left shipping pork rinds between Poughkeepsie and Toronto. Once you get going, though, you'll be able to earn so much money that your railroad will grow like hungry baby elephant (happily, trains do not make near as much solid waste as baby elephants. They make actual steam, whereas the baby pachyderm makes that metaphorical steam I discussed earlier).

The thing that marks Age of Steam as a really great game, rather than merely enjoyable, is the fact that you'll have dozens of choices every turn, but you'll only have to learn a few rules. It's not as simple as a Reiner game, or anything, but the rules are easy to learn and quick to play, yet provide incredible depth. You'll be torn between building your rails to expand and saving your money so you don't have to issue shares. Should you try to move goods first, to get the jump on your competition, or should you expand your rail line so you can make those really long hauls? When it comes time to bid for turn order, do you crap or get off the pot?

And it's so popular that there are expansions all over the place. In fact, the copy I got from Eagle Games has two expansion maps right in the box, in case I get bored of shipping jelly beans to Pittsburg and want to haul Egyptian hashish all over Barbados. There are like 30 expansion maps, which will keep you enjoying Age of Steam for a very long time.

Now, there are a lot of people who get really mad about this game. Unreasonably mad. They get all red-faced, and grunt a lot, and... come to think of it, there's another poop joke working here. They hate that Eagle Games released a third edition. They think FRED screwed it all up. They complain about missing rules (which aren't missing in my copy), or inferior components (which is dumb, because these pieces are AWESOME), and otherwise have a conniption until they fill their pants.

Those people are dumb.

This is a ridiculously good game. I can't wait to play it again, and many more times after that. If you're not into train games, avoid this one - it's the definitive train game - but for everyone else, you're going to love Age of Steam, no matter which version you pick up.

As an added bonus, you can read the rules for Age of Steam while you're taking a steam.

Cons:
Some people don't like the most recent edition... but they're dumb

It's been a while since I played a game as fun as Age of Steam. You can preorder one here:
http://www.eaglegames.net/ProductDetails.asp?ProductCode=EGL030
Posted by Matt Drake at 4:07 PM

Sorry, but the plastic Railroad Tycoon trains are garbage. A "steam" if you will.

Sounds great, I want a train game just to have one, how you compare it to TTR?

Not even close. TTR is basically a set-collection game. Age of Steam really feels like you're building a railroad.