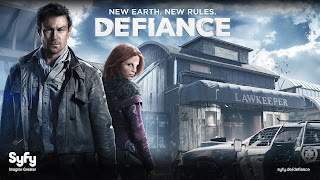 Usually, if I'm reviewing a TV show, it's because I loved it and I want other people to enjoy it. Tonight, unfortunately, that is not the case. Tonight's review is a caution sign, a warning. Tonight, I watch bad TV so you don't have to.

I probably should have known going in that Defiance was going to be lame. It looked like it had promise in the ads, but then again, if I had been watching, I probably would have noticed the cheesy costumes, or the video game tie-in, or the fact that they played that wretched Imagine Dragons song non-stop during the TV spots. But I didn't. I saw space aliens on television and I wanted to watch it.

Defiance tells the story of a world destroyed by intergalactic war. Or, more accurately, it tells how aliens came to Earth and wrecked the piss out of it, then when they moved in, they broke everything and then somehow lost the ability to move back out again. So it's essentially post-apocalypse with aliens.

But these are not very alien aliens. They have taken a page out of Star Trek's book and made all the aliens just basically people with bad make-up. These aliens are so similar that they can get all Barry-White-Get-It-On with each other and with humans. Although so far, it looks like the only species interested in scoring a little extra-planar booty is the human race. The white-haired albinos don't seem interested in getting jiggy with the forehead-bone people. Humans, being a randy lot, will pretty much hook up with any of them.

Let's say you decide there's a good reason there are eight alien races on the same planet and they are all so similar as to be sexually compatible. Maybe you just give the uncreative assholes who made the show a pass and go on to see if there are exciting alien stories to be had. And then you will find out that no, there are no good stories, just mile after mile of blatant plot holes and logical inconsistencies.

Good sci-fi shows (as opposed to good SyFy shows, which would seem to be an oxymoron) often have lots of mysteries that unravel as you watch. Defiance tries to have a good mystery, but sadly, the mystery is so lame that I don't care. The mystery might be capable of saving the show if the show itself weren't so horrible. Or if there were enough good actors for it to be worth saving.

There are actually a few decent actors on Defiance. That chick who is in Warehouse 13 as HG Wells, and in the second season of Spartacus as a woman who has a lot of sex, is on this show. Unfortunately, her makeup is so unsettlingly bad that despite her being frequently close to nude, it's tough to watch her. So when the scene flips over to the lead character, you'll be grateful for the respite, especially because this actor is cool enough that if they had made him the mercenary bad-ass on Revolution instead of whatever daytime soap opera star they have in the job now, I might have actually believed that he had, at one time, killed a bunch of people.

Sadly, there are also the bad actors, and they're hard to avoid. Acting while wearing five pounds of rubber prosthetics on your face must be hard, because the sidekick girl seems to be incapable of facial expression. The albino husband is such a bad actor that he almost makes the guy who plays the son seem acceptable. He is not, by the way. The albino son is the worst actor on the show, and this is a show with a lot of bad actors, so that means he is a very bad actor.

But this is SyFy, so bad acting and cheap makeup is just about what we expect. We can overlook those factors if we can find something cool about the show. Cool tech, spaceship battles, exciting alien throwdowns, or plausible plot lines - any of those would make this a watchable show. If it had them. It does not.

I did give Defiance a decent shot. I watched the first four episodes. Now that I am writing this review, I can gladly go about not watching any more, and go back to trying to figure out how to get caught up on Falling Skies, which my wife insists got a lot better after the pilot, though I have a hard time believing that because the pilot was so dreadfully dull.

I just want someone to make something as good as Firefly, but until sci-fi writers realize that great characters make the show, not face putty and computer-generated spaceships, I guess I'll just have to watch Star Wars again on Blu-Ray.
Posted by Matt Drake at 7:24 PM

Must admit, I feel the same way about Defiance; there was just something about it I couldn't put my finger on, but you just did. Hey, ho!

It's good to know someone else saw the same problems. I wanted this to be awesome, but it failed.

Sorry, but I disagree (on the internet?!)

My wife and I have been watching and, for low-key couch time, it's a fine show. While Firefly looked at the life of space cowboys negotiating the wilderness and many types of settlements on the frontier, this show focuses in on the day-to-day life of one such frontier town.

Does it have the high level of APM (Awesome Per Minute) dialog of a Firefly? Nope. Does it have occasional lines that make me smile? Yessir. And that's so much better than the drek on network. I'll take a dozen Warehouse 13s and Defiances, over Dancing with the Amazing Bachelor Race shows on the Big Three networks.

What I especially like about Defiance is that it has two single dads. One of them is even a step-dad. It's a small thing, but an appreciated departure from an old trope.

I also like that anyone who survived the wars has at least some sort of badass skill -- and often a very pragmatic outlook on life/death.

I'm curious what level of non-human aliens you'd expect from a weekly show on a cable network? This isn't Avatar. Dropping in CGI backdrops is pretty "easy" these days for TV-level special effects companies. Animating moving, speaking, reacting characters realistically into every scene? Not fiscally feasible.

Thanks for venting, and for letting me do the same.

Falling skies is much better and it does take a few episodes to get moving.

Tensider, I call you idiot! For disagreeing!

No, not really. I can totally see that. And I agree that it's better than network TV, and a LOT better than any reality television. But that's a pretty low bar to hop.

I'm not suggesting that the aliens should be Avatar-quality interesting. But Falling Skies has non-human aliens, and they look bad-ass. So they could have done something original. This just looked like an attempt to be good that went bad.

"It's not as bad as these worse shows." might be a valid point, but just because there's something worse doesn't make this worth my time.