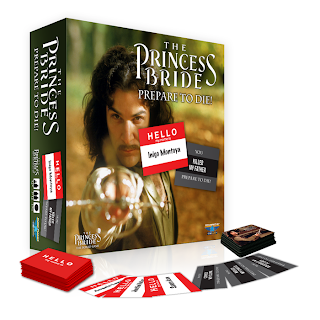 It seems silly to be writing a review of a game that is basically two cards that you put together to make something kind of dumb, but Game Salute has been very good to me and Dan Yarrington is a bad-ass (and he's the head dude at Game Salute). So I'm mentioning their Kickstarter promotion for Prepare to Die, because I've seen the cards and they're funny.

The game is essentially a gimmick - take the greatest line from Princess Bride and substitute other funny stuff. Like this:

Hello! My name is Arnold Schwartzenegger. You collapsed my souffle. Prepare to die.

That's it. That's the game. In fact, the rules for this game are so short, they printed them on three of the cards. And in case that sounds like a lot of rules, that covers three different ways to play the game. So it's not very many rules.

Really, though, the rules are that you're going to combine a person with a thing that person did, and pretend that's a good reason to kill them. Then laugh.

Game Salute sent me a few of the cards for this game. They're clever, and some are even funny. I have to be honest, I wouldn't buy this game, because it's almost completely pointless, but I also have to admit that I laughed when we were coming up with some rather silly combinations.

Hello! My name is Harriet Tubman. You branded my stallion. Prepare to die.

Hello! My name is Nikola Tesla. You drank my milkshake. Prepare to die.

I don't think I need to keep going. Either you want to play this game or you don't. If this sounds like fun to you, check out the Kickstarter and buy yourself a copy:

HELLO! MY NAME IS PETER PAN. YOU SANK MY BATTLESHIP. PREPARE TO DIE.
Posted by Matt Drake at 9:45 PM

I don't think 'ripping off' is really fair. They help a lot of small publishers succeed at their Kickstarter campaigns, so it does look like they're all over Kickstarter. But this is a rare case, to see a game that is directly published by Game Salute, as opposed to them just helping someone else make it happen.

Besides, someone loved Apples to Apples, so someone will love this. One man's trash is another man's come up.