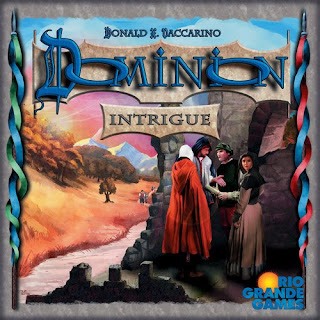 I've already said that Dominion was an awesome game, and since I reviewed it, it has only gotten better. My wife and daughter both like it, so I find myself able to play six or seven games a week. I think it's safe to say that Dominion is a game that I won't be trading away any time soon.

So if a little is good (and it is, most definitely, good), a lot must be better. That was my thinking when I picked up Dominion: Intrigue, and I'm delighted to announce that I was right. Double the cards, you double the fun. In fact, I would say that Intrigue makes Dominion more than twice as fun. In case you're not picking up the vibe here, I'm definitely recommending it.

Intrigue is a complete game in a box. Everything you need to play Dominion is here - treasures, victory cards, curses, and a whole bunch of action cards. So you don't need the original Dominion to enjoy Intrigue - it's a heaping spoonful of awesome right out of the shrink wrap.

In fact, there are more than enough cards here to play Intrigue all by itself for a real long time. Some of the new action cards are just plain fun, like the bridge that makes everything cheaper AND gives you extra buys, or the secret chamber that lets you rearrange your cards when someone plays an attack card. There are a bunch more, and I don't have the slightest inclination to describe them all, but suffice to say that there's more than enough to have tons of repeat play value.

And as if that weren't enough, a new kind of card makes an appearance - the combination victory card. My favorite, given my love of loose women, is the harem, which gives you both victory points and treasure, so that you're not stuck with a damned green card taking up space in your deck the whole game. There are more, too - the great hall that lets you dump it out of your hand and get a replacement, or the nobles that let you choose between more actions and more cards.

But like I said, this is even better with the original game. The secret chamber is a great defense against the thief, but it doesn't stop the torturer, so you'll want a moat. And a throne room with a saboteur is just plain nasty. There aren't enough cheap multiple-action cards to please me, so I really like to roll in some villages to help out with the masquerade. Both Dominion and Intrigue are amazing games alone, but combined, they're the cat's pajamas.

The only thing that puzzles me is why they hired their artists at a school for special-needs kids. Some of the art is embarrassingly bad. The shanty town looks like it was drawn by an animator from the Simpsons, and the scout looks like Stephen Hawking drew it with a crayon in his mouth. I almost don't want to introduce new gamers to Dominion using Intrigue because they're likely to laugh me out of the room.

So, OK, the art on many cards is complete ass. I don't care. It's not like I'm playing Dominion for the pretty pictures. They could take the art off every card, and it would still be one of my favorite games ever. Intrigue is every bit as awesome as the original Dominion, and together they make for an absolutely outstanding game.

If you like Dominion and don't own Intrigue, you should make it your next game purchase. It's an absolutely fantastic game that makes an already fantastic game more than twice as fantastic. And that's an awful lot of fantastic.

Pros:
All by itself, a great damned game
So many new combinations and strategies to master
Exponentially more replay value
Takes a really awesome game and makes it more than twice as awesome

Dogstar Games carries Dominion: Intrigue. If you like the original, you owe it to yourself to run over there and pick it up:
http://dogstargames.com/store/1329089/product/RIO390
Posted by Matt Drake at 8:19 PM

Matt, you are always good with a phrase, but this has to be the line of the Month: "the scout looks like Stephen Hawking drew it with a crayon in his mouth." Damn dude THAT was funny. And yes, this game is AWESOME. I play with my kids, my woman, my friends. It almost never gets old. You just keep changing the decks. It really is a cool game!

Hey Matt, have you mixed all the cards together from Dominion and Dominion Intrigue? If so, what do you think--is it a good idea?

Hell yes it's a good idea! We put together all the blue-backed cards and do random shuffle picks, or we pick 'em, or we use one of the pre-built games from the book.

In my opinion, it's the only way to play the game. Use everything you've got.

I agree. It's all about mixing the three sets and seeing what shakes out.

Although I do have a friend who doesn't like sorting stuff out, and of the three boxes, Intrigue is his favorite. It's also the first one he used to learn to play, so that might be part of it.

Have you heard about the Black Market deck for Dominion?

I just stumbled across this blog which describes it:

I'm planning to buy either Dominion the original or Intrigue as my first set - would you say that the original artwork is as bad/inconsistent as it is in Intrigue? I like the sound of Intrigue but do not like Stephen Hawking crayon drawings. If both sets have bad art, well, then I guess I have to suck it up...