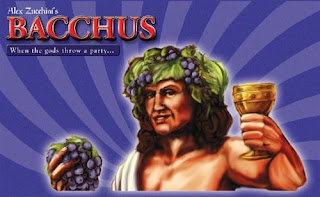 I'm referring to Bacchus, which you may have guessed from the title of the review. In this game, you're trying to get scantily clad nymphs to show up at parties, probably so they can get drunk and whip off their clothes. I mean, the parties are officially called bacchanalia, which as anyone knows, is a Roman word for a 'crazy naked shindig.' There are three different parties - there's the Tri-Delt sorority kegger, there's the John Hughes house party, and there's the Hugh Hefner stuff-of-legend blowout. Bunnies at the Playboy Mansion are worth a lot more than drunk co-eds at the freshman pledge party.

Tramps come in five colors. Satyrs try to get these loose women to attend the right parties, and at the same time, they try to get the most control over the best earners. For the most part, they do this by using action cards to shuttle girls to their destinations, or using satyr cards to just grab a couple Girls Gone Wild and adding them to their personal stable. Sadly, the game does not let you score any particular group just because your walking stick and fur coat match the colors in their dresses. Huggie Bear will be so disappointed.

The girls start off in five columns of hotties, and when you start moving nymphs, you take them from just one column on any given turn. So you have to choose the column that gives you the best return on your investment - if you're holding three green streetwalkers, you might want to choose the column that lets you move other green hookers to Hefner's house. If you think your opponent is going to get the most yellow, you might move the cards that send all the yellow girls to the lame college party, so that his earners are all snaggle-toothed meth addicts, and yours all do reality TV shows and get caught with senators in penthouse hotel rooms.

That's really most of what's going on here. You're playing cards to try to move women with low moral character to parties, and you're trying to get girls into your hand so that you can claim the score for particular colors. The pimp who winds up with the most nymphs in his hand of any particular color is the only player who can claim the points for those girls, so you can't really afford to get a little of everything. You'll probably only have a handful of cheap dames, so you'll want to specialize. I hear the chicks in pink are especially easy.

So it goes without saying that I like the theme. It's nice that someone has finally decided to make a game about the world's oldest profession. But while the idea of a card game about whores is awesome, the execution leaves a little to be desired. I played Bacchus several times, but I seem to be missing the part where your decision are particularly meaningful. There's probably a killer strategy in here somewhere, but I haven't found it just yet. And since I'm writing the review now, and don't have to play it any more, I probably won't.

See, more often than not, what ends up happening is that one playa (yes, I spelled that wrong on purpose) winds up with majorities in two colors, and that guy wins. It's hard to make that happen on purpose, and since you can occasionally steal from the other players, controlling a strong majority in anything is kind of a crapshoot. If you're competing with two other people for blue, and the last guy is quietly collecting all the orange and green, he'll probably end up winning, even if his girls all show up in mullets and cut-off t-shirts. You kind of have to pick a horse and back it the whole game, so you just have to hope you picked right. Changing strategies halfway through the game is probably going to leave you holding a big bag of jack squat.

I don't want to give the impression that I hated Bacchus. I mean, I don't want to play it any more, but it's not a bad game, exactly. Even if you give it a different theme (or just be honest and let it be the abstract it really is), it's still decent, and has room for a fair amount of critical thinking. It has a certain something. I'm just not entirely sure what that something might be.

Cons:
Individual decisions don't feel particularly important
Guess wrong at the beginning of the game, and you're basically hosed

If you want a light, fairly quick card game that won't overtax your cranium, you can go here and pick up a copy:
http://www.eaglegames.net/ProductDetails.asp?ProductCode=GRY014
Posted by Matt Drake at 9:41 PM

Sounds a bit like Through the Desert, but with Camel Toes being the goal, not Camel Trains.