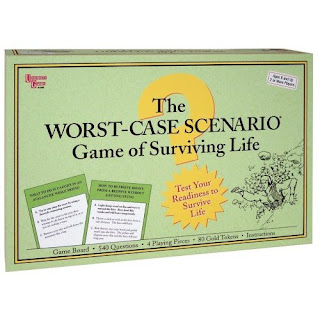 I had a really crappy week, and it ended with a really crappy Friday. I had a fun game I was ready to review, but now I feel like a little catharsis. And for me, that means finding a game that I hate and saying terrible things about it and the misbegotten neanderthals who created it. So strap on some waders, because it's about to get messy in here (metaphorically, anyway - it might be very clean where you are, and my office is in a state of constant disrepair, so it's not likely that anything is actually going to get messy. That's just something people say. I don't know what people).

The target of tonight's feel-good review is a wretched piece of crap that passes itself off as a board game, titled The Worst Case Scenario Game of Surviving Life. Since I know I have a tendency to candy-coat my opinions, let me be clear - this game is a travesty and should have been put down like a rabid squirrel.

The Worst Case Scenario Game of Surviving Life is basically a stupid trivia game. You might open the box expecting a bunch of questions about escaping shark bites and riding out avalanches, but you would be disappointed. Yes, there are a few interesting questions about swimming against a rip tide or escaping fire ants, but there are also questions about such disasters as responding to difficult interview questions or cleaning a grimy barbecue grill. I am not making these up - I have the game open right now, and I'm reading these questions off the cards. It's a little tough to prepare for such a trivia game. These are not scenarios you probably covered in the Boy Scouts.

To add insult to injury, the game itself is dumber than a box of recycled milk cartons. You progress through 'life', rolling to move and hoping you can correctly describe how you would eat a caterpillar so that you don't have to stop. You go to school, then dig some ditches, and maybe get a happy family. And along the way, you get to deal with such terrifying accidents as coffee-stained documents and dates who want a Swedish massage. No, I am still not making this up.

As you answer questions correctly (and good luck - if I could identify a nightmare workplace by the potted plants, I never would have spent three years making ugly packages for the world's worst pet clothing company), you get tokens. If you answer incorrectly, you lose body parts. I, for one, would like to know what kind of horrifying company picnic you're attending where you could lose an arm, or how serving the wrong dessert to an old lady with fake teeth costs you a leg. (That's right, those questions are in there. And you can lose a limb for getting them wrong.)

So you've wandered across one of the ugliest boards of all time in one of the stupidest board games of all time, and managed to answer enough questions that you might be able to buy a little condo in Daytona Beach, but the insult is not complete until you see how the game ends. You get to this one last space, and you roll a die, and that's how much the question is worth. So after managing to be far ahead of your opponents (probably because you have to determine your hat size and your opponents have to perform emergency tracheotomies), you roll high, answer wrong, and wind up dead last. Or the dumb bastard behind you rolls ridiculously well and has to describe how he would cope with stage fright, and you end up losing to some moron who couldn't even correctly answer how he would get a girl's phone number (you're probably getting tired of this by now, but yes, those are real questions).

I have played some hideously ugly games since I started reviewing games, probably because I'm not nearly picky enough about what I review. Monster Quest, for instance, has art that will make you wish you were blind, and so continues to hold the top spot for ugliest game ever assembled. But The Worst Case Scenario Game (I'm not typing out all this crap over and over. You get the idea) is a very close second. They obviously attempted to all their printing with swamp green, flat yellow and dull black, and they succeeded, if you can call a board that looks like a PowerPoint presentation assembled by a four-year-old a success. The question cards are even uglier. They could have hired a graphic design intern straight out of junior college and wound up with a more attractive game.

So if you're in the mood to play a horrible, nonsensical trivia game with stupid questions, ugly art and a terrifically random end game that destroys anything you've done up to this point, you should get out more. Seriously. Go see a movie or something. Because the Worst Case Scenario would be that you play this game.

"Come with us if you want to rule the Earth and destroy the human race."

I read this post 2 times. It is very useful.

Let me show other source that may be good for community.