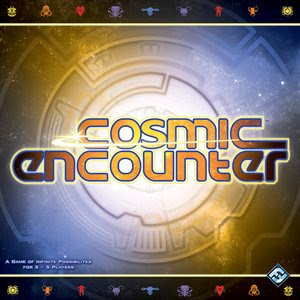 [EDITOR'S NOTE] The following review contains some factual errors. The winning conditions for this game are that you have to have five foreign colonies, not one in each other system. The editors should have caught this error, and apologize for any confusion.

[WRITER'S NOTE] I don't actually have an editor. I'm just trying to pass the buck to someone who doesn't exist. But this is still a totally kick-ass game, and now it's a lot better with three people. Carry on.

I've recently begun a project to attempt to cut down on the number of games I own. I probably have a few hundred games in my office, and while I know many people have more than I do, that's more than enough for me. In fact, if I never got another game, I could play the ones I have for the rest of my life, and never feel a need to buy another one. So I'm trying to cull the collection down to my favorite 50.

This is not easy, especially because every time I get rid of a few games, people decide to send me a bunch more. Probably they send more because I ask for them, which may seem a little bit counter-productive when it comes to reducing the stacks, but is kind of important if I want to keep writing about new games. I mean, if I just wrote reviews of the same 50 games over and over, after a while, I think people would quit coming here.

So any more, after I play a game, I sort of mentally decide if it's Top-50 material. Usually, they're not - I have some really great games, so the competition is brutal. But this weekend, I played a game that not only easily bumps itself into the top 50, but may wind up in the top ten. It's called Cosmic Encounter, and it's fantastic.

Cosmic Encounter is a ridiculously fun game. It doesn't seem like it should be this awesome, because you just take turns putting little flying saucers on planets and then comparing cards. And yet, Cosmic Encounter might be one of the best games I've played in a really long time (if you don't count any of the other amazing games I play all the time).

Everybody starts out with a home system with five planets. The goal is to get a colony in each of your opponents' home systems. Now, you may think that because I have a fondness for games with violence, and I really love Cosmic Encounter, that you get your colonies through the application of brute force - but that's not the case. In Cosmic Encounter, you win because your friends let you.

Of course, they may not mean to let you win, and that's where the beauty of Cosmic Encounter comes into play. More than anything else, Cosmic Encounter is about choosing the right time to help out, and the right time to bow out. Every time you send ships to establish a colony on another player's planet, you can invite people to help you. And then they invite people to help them. So green might help purple one turn, and then help yellow attack purple on the next turn. It all depends on what green needs to get ahead right then. If green is trying to stop red from getting a colony in purple, he'll help out that turn, and then next turn, he may need a colony in purple, so he'll throw in with yellow to get it. It's a little convoluted, and a lot awesome.

Then you've got different aliens. In most games, special powers are kind of an afterthought, or something that adds a slight variation on how you would play. But in Cosmic Encounter, each player has a completely game-breaking ability that will cause utter chaos and mayhem, and completely change how the game is played. For instance, the Oracle aliens win an awful lot of fights, because they can check your attack card before they play their own. And the Vacuum aliens tend to lose a lot, because they can sometimes gain more by losing than by winning, if they play the right cards and destroy the right enemies. The list of powers wraps around the block, because there are like 60 different aliens in the box. You would have to play a minimum of a dozen times to see all the different powers, and even still the only way that would work is if you've got the kind of luck that makes a hundred chimps with typewriters bang out an encyclopedia.

There's a fairly heavy amount of luck in Cosmic Encounter. Instead of just saying, 'I'm going to send my red ships to green's planet', you draw a card every turn, and that card tells you where you have to go. So no matter how much you need a red colony to win, you'll have to hope some other player is willing to share the win and let you piggy-back when they draw a red. This forces you to cooperate, to make and destroy strategic alliances, and maintain as much flexibility as you can manage as the game progresses. It's luck, sure, but without it, this game would be boring. With this luck factor (and some other luck factor that comes in here and there), it's flat-out brilliant, and a little addictive.

For a game that looks like it should be fairly simple, Cosmic Encounter is brilliantly deep and brimming with strategy. Play the wrong special card at the wrong time, and you risk both exposing your hand (and thus losing it) or worse, losing a key colony. You can lose your alien ability if you lose too many planets. You can be holding an amazing hand of cards one minute, and the next minute you're handing the game to your opponent on a silver platter as he uses all those great cards against you. And all the while, the most critical element is that you must always try to make the best alliances you can get, because without a little help from your friends, you'll never win. With some help, you'll probably just give the game to someone else anyway. But you'll have an amazing amount of fun doing it.

So like I said, Cosmic Encounter is a shoe-in for the Top 50 Hall of Fame. It's intensely fun, with no wasted time and strategy so deep you'll wish you had a second brain to help out. This is one of those games I could play once a month, and not get bored for years. The only way I could offer a higher recommendation for Cosmic Encounter is if could either cook or change the oil. And either one would be weird in a board game.

Cons:
Not as awesome with three players as with five (though still awesome)

It's been a while since I made this abundantly clear, but Dogstar Games supports Drake's Flames by getting me review copies I couldn't get otherwise. They got me Cosmic Encounter, in fact, and lots of other stuff that has been requested, and if they didn't get me these games, you wouldn't be able to read about them, because God knows Fantasy Flight isn't about to send me anything. And even better than keeping me stocked with stuff for you to read, Dogstar Games is cheap. Check out this price on Cosmic Encounter (which you should TOTALLY buy) and then notice free shipping. Then buy this game:
http://www.dogstargames.com/product/FFGCE01
Posted by Matt Drake at 9:50 PM

Cosmic Encounter is a great game and Fantasy Flight has produced a great version of it, but there are many other versions - the original Eon, Avalon Hill, etc. The game has been around a long time - since 1977. I am shocked that you haven't played it before. This game pretty much invented the variable powers for player idea. Great game.

Great review as always. Is this the same as older versions? Or are there some minor changes ( rules wise, not with pieces and parts )?

Sounds like I need to add this to the wish list - how long is an average game?

I think there are some additional things, like tech cards, and I know the Filch power was updated (though the classic version is still in there, if you want to use it). I don't know about other updates - I never played the old one.

The game will take about an hour to play.

It's funny you should review this game so soon after the rant about heroscape dying. The lull between Heroscape expansion waves 8 and 9 allowed me to finally get a different game to the table in April. That game was Cosmic Encounter and it was a hit, we'll actually be playing it again in June.

My group is pretty resistant to new games so for something to succeed with those guys speaks volumes to how good of a game CE truly is.

I know this is a year late but there's never a bad time to recommend Cosmic Encounters. I have the original Eon Games version with all 9 expansion packs. It's my favorite game of all time (I've had to tape up the box a few times) and I've never introduced it to anyone who didn't have fun playing it. The Eon box pronounces it "The science fiction game for everyone" and I think that's right.

There's never been a bad repackage of this game, although the Avalon Hill version wasn't great. Also, original designer Peter Olotka and partners launched a new version called Cosmic Encounter Online (it's quite good actually) you can play at www.cosmicencounter.com!