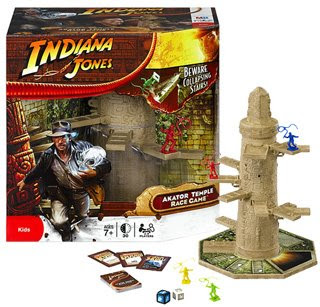 Enter the new line of Indiana Jones board games. Not all of them are for kids - Indiana Jones Monopoly, for instance, is not really for young kids, unless they like Monopoly. But the one I'm reviewing tonight - Akator Temple Race Game - is definitely a game for young children. Or just really dumb teenagers. Come to think of it, if your kid smokes a lot of weed, he could probably turn the tower into a bong. Not that I recommend it, and it probably wouldn't work as well as a plastic honey bottle shaped like a bear, but I suppose that it would be kind of cool to get stoned playing the game... using the game. Then it might be an awesome game, too. Like Wizard of Oz with Pink Floyd.

(I want to take a step out here and remind my more conservative readers that most of these are jokes. I don't smoke anything stronger than a cigar, though I did have a friend when I was in college who had a bong made out of a plastic honey bear. He also worked the same job for ten years and never made more than ten bucks an hour, and only had an apartment because his parents paid the rent. Take that for what you think it might be worth.)

Um, anyway, the game. The thing is actually really cool. It's not a board game, really. It's more like a toy with rules. There's a pillar with all these steps coming off it, and when you push the button on top of the pillar, some of the steps tip down. All the players pick their favorite color of Indiana, and they race to the bottom, trying to find the crystal skull and enter the throne room. Sooner or later, though, someone will fall off. That's actually half the fun. Oh, who am I kidding - that's almost all the fun. Your kids will be pushing your hand out of the way when it's your turn to push the button, just so they can be the ones to make the stairs drop Indiana Jones to his death.

Some of the steps have little hooks at the end that will fit your Indiana Jones figure, and if you're parked on one, you'll stay on the step when it tips. There are also little holes next to some of the steps, and if you hook your little figure's whip into the hole, that also lets you stay on. The entirety of the strategy for this game involves spending as little time as possible on steps that won't let you fall, which reminds me of college, when I had a second-story apartment and a tendency to drink all my wages.

(This review is becoming increasingly adult-oriented. Not that I mind, but I would like to reinforce again that I am neither a stoner nor a drunk. I can't afford either one. I have to write a review site to get free games. If I can't afford board games, I certainly can't afford weed and liquor.)

The game play is where Akator Temple fails. See, I maintain that kids are not dumb. They can play Heroscape. They can play the D&D Adventure Game. They understand tactics, maneuvering, planning and strategy - just not as well as an adult. By taking away every bit of decision-making available, the Akator Temple game is a little patronizing. You roll dice to move, then draw a card, and that's about it. About half the cards tell you to push the button on the temple to see if you can send someone to the bottom, which is the entertaining part. If you can pick up a crystal skull card and be the first person to the throne room, you win. If you're a smart parent, or at least a compassionate parent, you would let your child win. But it's kind of hard to let the kid win when you don't really have any control over the game.

As toys go, the Akator Temple Race Game is awesome. Kids will drool over it, beg to own it, then when you get it for them, break it inside an hour. That's what kids do. It is a seriously cool toy, with moving parts and a really clever design for your figure that makes the whip more than decorative. If I was just reviewing toys for kids, this would be a glowing review.

But I'm not just reviewing toys - this site is about games. And as a game, Akator Temple really doesn't have much going on. It's got about as much strategy as Chutes and Ladders. For very young kids (like under 9), this is probably a blast (though I've known kids that young who could beat me at chess). For kids older than that, once they get tired of making Indy take a header, they'll forget it until the next time you go through their room looking for stuff to take to Goodwill. Then, because they're kids, they'll tell you how it's one of their favorite toys ever, even if it has lost eight steps, half the cards, two of the figures and both of the dice.

Cons:
Almost all luck
Too dumb for smart kids

If you've got young kids, or just really dumb teenagers, you can entertain them for a while with the Akator Temple Race Game. You can get one here, once it comes out:
http://www.hasbrotoyshop.com/ProductsByCategory.htm?ID=21914&CD=7
Posted by Matt Drake at 5:17 PM

I am so getting this game! Can you post the instructions to turn it into a bong please! I am just kidding, I can figure that easy on my own.

This is a better review then at BGG, thanks for sharing. We just Found out my Wife is Pregnant, so I will need kids games for the future.

This game is actually pretty cool for younger kids (or, like I said, stoners). Once kids get old enough to want to have some control over the game, they'll tire of this quickly, but kids who are bored with Chutes & Ladders but not ready for Heroscape will really like it.