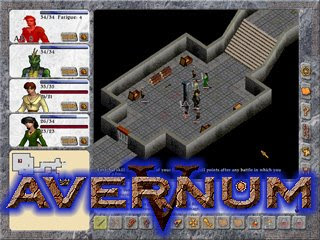 I can hear it now - more than half of my readers just groaned inside. 'Oh crap, another stupid video game review.' Yeah, but this is different, I swear. This is not a console game, or a hard-to-find computer game you'll have to buy off eBay, or some two-bit quick download. It's Avernum, and if you know anything about independent video games, you know this is a big deal.

Spiderweb Software is a really small computer game developer that makes games for Windows and Mac platforms. Their games are thoroughly turn-based, with sprite-based graphics instead of those fancy-schmancy 3D renderings, and limited animations. They're also brilliant, with stories so involved and tactics so deep that you'll find yourself thinking about your next move on your drive to work. And board game fans don't have to run away, either - the tactics you use in Heroscape or Descent will translate to Avernum V. This is just about as good as turn-based computer RPGs get, with or without spiffy graphics.

Now, I'm not going to gloss over the graphics issue. Compared to anything made by a major studio in the last fifteen years, Avernum V is just this side of butt-ugly. There's no flickering light, no dramatic spell effects, no elaborate combat animations. The character models are simple and every swamp space looks like every other swamp space. It's not pretty. It's kind of like a stripper in a dive bar where they can't afford to hire really hot women, and settle for chunky girls who are willing to get naked in public.

But once you get past the graphics, Avernum V is all hot girls who could dance on the hoods of cars in Whitesnake videos. It's one of the slickest, smoothest, most entertaining computer games you're likely to play. The controls are simple (mostly point-and-click), with tons of options for every turn. There are caverns to explore, people to meet, monsters to battle and villains to sneer at you. This girl may not be smokin', but she's amazing in the sack.

The premise of Avernum V is that there's an entire sub-realm underneath the surface empire, a gigantic cave complex called Avernum. Criminals used to get exiled there, and it's still a rather rough-and-tumble place. People are tough down in these caves, and they work hard, and they don't tend to have very high opinions of the empire above them.

Enter the villain Dorikas, who makes a very-nearly-successful attempt to kill the empress. She's poisoned, and as a scout for the empire, you have to find that dastardly do-badder before he succeeds in killing her and overthrowing the entire empire. The problem is, that bastard Dorikas has run to Avernum, and he's going to be damned hard to find.

The rest of the game has you roaming from town to town in the sprawling caves of Avernum, past monstrous lairs and ruined lands and dark caverns full of monsters. You'll take on jobs for the locals, hunt down creatures of the darkness and go questing for magical weapons. As you travel, you'll get more involved in the story - agents of Dorikas will come to you, offering you the opportunity to change sides. And you actually can change sides, in which case the entire game becomes drastically different.

The real shining star of Avernum V (and honestly, the entire Avernum series) is the combat. Other games may be all Hollywood glamor, but compared to the Avernum games, they're just going to lie there, while Avernum V can shake her ass like it had a motor. You may have thought Final Fantasy Tactics was good, but that's because you haven't played Avernum. Every action counts. Every move is crucial. Every hit is noteworthy. Every spell must be carefully cast to maximize its effectiveness. You'll practice more complex tactics than you ever put into a game of Squad Leader.

If you really need more persuading (and there are probably some skeptics out there still), I'll say this - I'm going to review anything Spiderweb Games ever offers to let me play, because they're awesome. I wouldn't do that for any other video game company (except maybe Rockstar, because the sacrifice would be worth a copy of GTA4). And I most certainly wouldn't do that for any other indie developer - 90% of those guys suck. If Avernum V is like a homely girl who's great in bed, those other games are your over-perfumed aunt with the saggy boobs and a huge nose wart who always smells of gin and dried sweat.

There are two groups of people I want to really press with this review - board gamers and graphics junkies, because everyone else ought to be persuaded by now. If you turn your nose up to any game that doesn't include plastic, you're missing out, because Avernum V has everything you ever loved in a tactical board game (not counting a human opponent). And if you're so hung up on a pretty face and a stacked rack that you never give the ugly game a chance, you're missing some of the best gaming you'll ever get into bed (how's that for a questionable adult metaphor?).

If you're still not sure you'll like Avernum V, go to the Spiderweb Software site and download the free demo:
http://www.avernum.com/avernum5/index.html
Posted by Matt Drake at 9:23 AM

Thanks for the link! I'm always looking for non-RTS games like this. I loved the old SSI D&D games (Curse of the Azure Bonds, etc.) and this looks very similar. Now, will you excuse me while I get lost in the world of Avernum V for the rest of the week? :D