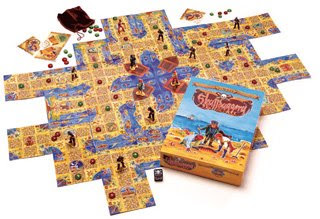 I need to clean out my office. It's a disaster. There are games everywhere - on four bookshelves, in the closet, in the hutch, and scattered all across the floor in stacks as tall as I am. And the real problem is that I don't like most of them. So I've decided on a solution - I'll review them, then I'll get rid of them.

Skullduggery is definitely one I'll be donating. It sucks. As games go, it's a complete failure. It's boring and tedious and irritating, and will make you hate anyone who gets you to play it.

As a toy, though, it's pretty damned cool. There are little glass beads for treasure, really gorgeous cardboard tiles, and fantastic painted pirates. Well, maybe fantastic is the wrong word - they're definitely pirates, and they're definitely painted, but they're actually pretty laughable.

There are eight bad guys pirates in the box. They're all identical, with brown shirt, brown pants, brown shoes, brown hair and a brown beard. Only the brown beard is so poorly sculpted and painted, that they actually look more like ninjas. Which would be cool, except that they look like ninjas that take the short bus and drink from sippy cups.

Then you've got hero pirates. There are four of these, and they're so politically correct it would get the seal of approval from any human resources department in the country. There's a white pirate, a black pirate, a girl pirate, and a gay pirate. I don't know for sure why the manufacturers of this game thought it would be a selling point to have a gay pirate. Maybe they were just trying to prove that they were equal opportunity employers.

To play the game you place these beautiful, fully-illustrated tiles out in a grid, with the four starting boats at the middle. Then you put treasure all over the board, then you put out the ninja pirates. Everyone gets treasure map pieces, and they have to find their way to the tiles indicated on their maps. But those pesky ninja pirates keep trying to stop you, and then you have to pay them off with your treasure.

You move your pirate around the board, and you move ninja pirates to block other hero pirates. And then, since you're apparently on a magic pirate island, you move one of the tiles to somewhere else, so that the little over-crowded (but politically acceptable) island shifts around all the time.

There is some strategy to this game. You move the ninja pirates, but do you move them out of your way or into another pirate's path? You roll a gigantic die and plot careful paths. You shift the island so that your opponents are far from their goals and you're close to yours.

The problem is, the strategy is purely turn-by-turn. It doesn't really pay to plan ahead, because there's not much to plan. There aren't very many decisions to make, which would be fine for a kid's game, but then the game takes so long that kids are going to wander off and play Connect Four. And that's a shame - the game is obviously trying to teach children about diversity, but they're going to get bored before they decide to become worthless HR office drones so that they can enforce equal opportunities for all.

Even though I don't ever want to play Skullduggery again, I kind of feel bad parting with it. It's just so damned pretty. Even the goofy-looking ninja pirates are neat toys. If you throw away the rules, a kid could get a real kick out of playing with the game. The black pirate and the girl pirate could team up to beat up the ninja pirates, and the gay pirate could follow the white pirate around making inappropriate jokes about holding his jewels.

But my kids are too old to play with toys like this, and too smart to want to play the game again, so off it goes to the stack of games I want to lose. It appears the game is going to have to get the hell out of my office before I start using it to prop open doors.

Pros:
Components so gorgeous, they work better as toys than as game pieces
Really neat art on the box and rules
Some small modicum of strategy
Teaches tolerance and acceptance of other genders, ethnicities and sexual proclivities
Unintentional ninjas

Cons:
Crappy game
Boring
Too long to be an adequate kid's game, and too dull to be an adult game

Not everyone hates the game. Here's a balanced review from someone else:
http://www.funagain.com/control/product/~product_id=016111
Posted by Matt Drake at 3:14 PM

How does the girl pirate compare with the Hot Witch?

Not favorably, I can tell you that. The girl pirate looks slightly hermaphroditic.

So there's a white pirate, a black pirate, a girl pirate and a gay pirate. What colors are the girl and the gay pirate?

Well, if you're going to push the issue, yes, the girl and the gay pirate are also white. So maybe HR might take offense - but technically, they're still minorities.