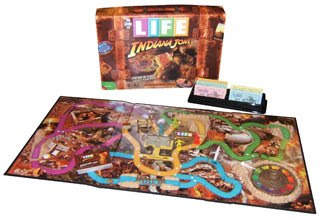 When the average person on the street hears 'board game', one of the first games he thinks of is The Game of Life. It's one of those games that is mostly played by kids, occasionally joined by the parents, when they think an evening of games will make the family bond. You know, just for one night, Little Billy won't try to burn the curtains, Little Jane will decide not to get that tattoo, Dad will actually care more about his family than strippers and Mom won't drink all the cooking wine.

But when actual gamers hear 'Life,' they cringe. The original Game of Life is boring, random and dull. The guy who plays Runebound is not going to enjoy a game of going to college and trying to get rich and breed. I mean, there aren't even any bodies. How can a game be fun if there's no body count?

But then Hasbro up and releases The Game of Life: Indiana Jones. Now gamer Dad is remembering how, when he was 12, he had a bullwhip and a fedora. Mom is thinking about how, when she was in high school, she would have killed a puppy to have Harrison Ford's babies. And the kids see this younger version of the old geezer who just made a movie. And maybe, just maybe, combining Indiana Jones with The Game of Life will be enough to try that bonding family night one more time. Maybe tonight, Dad won't pretend to have a business dinner so he can shag his secretary.

The basic idea of Life has been completely overhauled. Many of the elements are still there - the board is all 3-D, with a cool plastic spinner. But you don't go to college any more. Now you start off at the museum, and that's as close to academia as you're likely to get. You don't get a car, or kids, or a wife, or a job. You're all Indiana Jones - you already have a degree (you call him Doctor Jones, Doll!) and you're not going to get married any time soon. Adventure calls, and you're the man to answer.

There are three different tracks to follow as you play the game, each representing one of the first three movies. Three little plastic relics are located on those paths - the grail, the ark and the burny stones. You want to recover artifacts, recruit partners and avoid traps. You still spin the spinner and then move, but you can choose which path you want, and instead of having exciting cards that read, 'your boss thinks you suck at golf - lose $500', you've got cards that say things like 'steal a relic back from that penis Belloq - draw an artifact.'

So now suddenly Mom isn't thinking about screwing the pool boy, because now Mom is Indiana Jones, and Mom is hooked up with Marion, only Mom is really kind of wishing she was Marion hooked up with Indiana Jones. Little Billy, on the other hand, just keeps hitting the traps to see if he can kill Willie, but at least he's not shoving firecrackers in a frog's butt (in all fairness, I think everyone wants to kill Willie).

The adventure cards tell you when the game is over - there are five special event cards at the bottom of the deck, which somehow make an already totally random game even more random. When you pull the 'game's over!' card, everyone sells their partners and relics (no, Indiana Jones would not do that, but Little Jane sure as hell would) and the person with the most cash wins.

Normally, I'm not going to say nice things about any version of Life. I hate that game. It's one I don't have to play now that my kids are out of third grade, which is nice, because MAN I hate that game. But Indiana Jones Life is a lot more fun than I thought it would be. Sure, it's still pretty random, but now you're not trying to get a corner office, you're trying to cross rickety bridges before Mola Ram can rip out your heart. And since the traps make you lose partners, you even almost have a body count. The game is fun, mostly because of the theme, but also because it's actually a pretty cool contest.

Hardcore gamers are not about to whip this out at game night. You're not going to say, 'hey, fellas, how about we cancel our Road to Legend group and play Indiana Jones Life instead!' But when the family wants to bond to keep Billy from failing algebra, and keep Jane from getting pregnant, and keep Mom and Dad from screaming at each other and threatening to move out, this might be the perfect game for family fun night.

Pros:
Incredibly cool-looking game
One of the best themes a game could have
Less random than old Life
Way more fun than the original
The spinner is shaped like a fedora

Cons:
Still not remotely a hobby game
Winning has more to do with spinning and drawing than making the right call

You can only get this one at Target. Here's a link:
LINK
Posted by Matt Drake at 6:42 PM

The stones are the Shankara stones...only reason I know is because they played the three movies over and over again all last week.

One other thing, it's a slight criticism that's more of a pining, whenever I read your reviews and see the cool looking display shots you always put at the start I click on them in the hopes that I can get a closer look. And each time I am disappointed to find that the closer look is merely the same picture at the same size, just by itself.

If it wouldn't be a bandwidth drain to do, I'd love for higher resolution pics to be linked or at least a link to another site with that close up, if there is one.

Sorry about the little rant, I wouldn't post it if I didn't want the best for you. ;-)

And I knew they were Shankara stones - we watched the movie Sunday, and even if we hadn't, I've seen the film like a dozen times. I was just being flip.

Well, the wife is pregnant, so I might get this one for JR., or to have when I see the wife eyeing the pool boy, wait a minute I will just not build a pool, much better Idea.
Nice review as always, very funny stuff

Awesome review Matt, I'm still laughing... I have actually managed to avoid playing this game bar one sad and boring afternoon for my entire 45 years. Maybe this is the time to share it with my kids.

THe second time I played I went beyond the four person limit and played with five people and it was much more fun. You end up having more run-ins, fights and swaps.

The other key factor I did is that I bought a bunch of $1 joke gifts with the higher winners choosing first. You can super-size teh fun of any game if you throw in prizes (no matter how big or small).