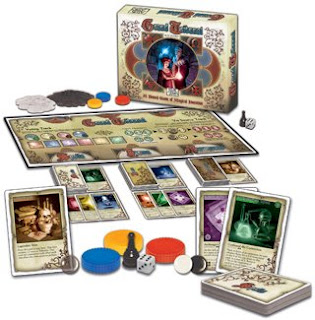 You know how there are all these games that brag that they're endorsed by Mensa? Most of the time, they're crappy abstracts where you stack a circle on another circle, or make some jigsaw piece block all the other jigsaw pieces. And most of the time the rules are really simple, like they were designed for Mensa members with learning disabilities.

Well, I've found a game that definitely should be endorsed by Mensa, because you have to be friggin smart as hell to play it. Grand Tribunal, from Atlas Games, has the capacity to be a fun game, but it will help if everyone around the table already has their doctorate degrees.

The premise doesn't seem that tough - you're making magic items. You research spells and items, put the spells on the items, and then there's a tribunal where they decide who has the best items. Make the best items and you win the game. Piece of cake, right?

Wrong. Dead wrong. Stinking-corpse-in-the-sun-being-eaten-by-crows-and-worms wrong. I can't remember when I played a game that was this convoluted, complicated, and difficult to understand. I'll take a stab at explaining how it works, but I'll be shocked if you can follow along at home.

You have to research the spells and items to combine them. Every turn you can place magic research tokens on your cards (but not the research cards) to try to advance them. Once you've got enough tokens on a card, it becomes active. Before that, it's inactive. But it might not be installed - that doesn't happen until you place an active spell on an active item. And different items can accept different spells, and there are only so many spells that can be placed on an active item, and then you can cast them from the active item, but if you do, that might cost points when it comes to voting, and it will also reduce the total score you get after the tribunal that determines who gets the most points for their items, though you may add a resource card that will increase the votes, thereby increasing your multiplier, and also increasing your score. Still with me? Because I'm mostly lost.

Three times during the game, tribunals occur. These tribunals use voting tokens placed in previous turns to determine what types of items and spells are the most popular. You don't get points just for having popular items, though. What you get is a multiplier. Then you add the base score for the item to the number of spells, plus maybe a resource card, then multiply that number by your multiplier, then do it again for each of your active items. Then you take a Xanax so you can try to relax after having done math usually reserved for high-school seniors taking their SATs.

As if the game wasn't complex enough already, the rules are the least intuitive clusterhump I've ever read. I had to read the rules four times, then play the game and read them again, before I figured out all the things we did wrong the first time we played. Then the second time, half the players still didn't understand how to compute their scores, and some people were aggravated when they didn't understand why they got fourth place and not second.

To make matters worse, I think the authors of the rules put in extra rules as a practical joke. There's a paragraph about discarding your hand, but since all cards are played as soon as you get them, you never actually have a hand, so I still don't know what that part of the rules was talking about. That's not an exaggeration or a joke - even after playing a few times and reading the rules five times, I still don't know what that paragraph tells me to do. We pretended it wasn't there, and were much happier for it.

And don't get me started on the physical design of the game. The voting tokens and research tokens are little plastic tiddly-winks, and they routinely go flying around the room because they actually launch when you accidentally press down on one side. You're supposed to keep the cards organized in a very specific way, to keep from forgetting which items are active and which spells are being researched, but we really could have used a little play mat with these areas clearly marked. All those tiddly-winks are supposed to stack in various spots on the board, but they're so messy that they end up wandering all over the place and confusing everyone so that they keep asking, 'was this supposed to be here?' Little plastic buckets would have been a godsend.

But there's good news - if you can wade through the rules and learn them, there's actually a really fun game in there. It's complicated, sure, but after a few plays, we were all having a really good time. We'll play Grand Tribunal again, and with the number of games I have, that means something. The game is flat-out gorgeous - the art and color and everything else is some of the best graphic design I've seen in board games. The theme is fun and competition can be very intense. It's just a shame that you'll need Stephen Hawking to do your scoring for you, especially because he's so hard to understand.

I can offer a hesitant recommendation for Grand Tribunal. It's not for stupid people, and God help you if you break it out at a casual party. But if you're a seriously hardcore gamer and want a challenge that will exercise your mind and have you planning three moves ahead, Grand Tribunal should be right up your Mensa-card-wielding alley.

I like Grand Tribunal, but the learning curve isn't steep, it's a 90 degree incline. If I haven't scared you off, you can get one here:
http://www.funagain.com/control/product/~product_id=015655
Posted by Matt Drake at 10:56 AM

In order for a game to have the Mensa Seal of approval, it needs to go through Mindgames:
http://mindgames.us.mensa.org/manufacturer/index.php

So those are the people who decide that the games are dumb enough for Mensa members? Because seriously, half the Mensa games I ever see are so dull, they absorb light.