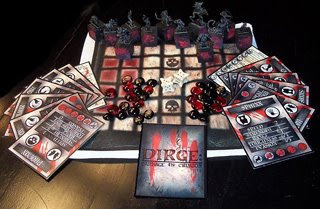 I like games with some killing. That's no secret. So when a game comes right out and says in the title that there's going to be some body count, it gets positive points right off the bat. Dirge: Carnage in Crimson, from Small Box Games, sounds like it ought to be announced by the guy who does commercials for monster truck rallies. You can hear that gravelly, fake-excited voice saying, 'Friday! Friday! Friday! Dirge: Carnage in Crimson!'

And the game delivers on the body count. There are twelve figures in the box, representing mythical creatures from a variety of nationalities. The war priest and the mummy are probably Egyptian. The cyclops is pretty Greek. The giga is... well, honestly, I've got no idea what a giga is. But the point is, all these different critters have a mad love for violence, and they mete out some hardcore ass-whuppin', just like you'll see at a motorcross show, but with wacky monsters instead of dirt bikes.

The game is played on a six-by-seven grid, with clearly-marked starting spaces and little skulls showing where your resurrected critters can come back. You have limited actions on your turn, and to make matters more complicated, some actions leave these mythical hard-ons a little winded. Move and attack with the uat (which, as far as I know, is short for 'uat the hell is that?'), and he won't move again for a couple turns. Use the mummy to bring back a slaughtered ally, and he'll sit around for a few turns, trying to catch his breath. Apparently raising the dead is hard, even for the risen dead.

Every figure has different stats - some are tough as nails, but slow as molasses. Some shield their allies. Some heal. Some hit harder or better. The trick to building your team is to make sure you get a good mix - it doesn't matter if you've got both of the huge brawlers if the other guy has all the guys who can bring back the dead. And since you're vulnerable from the sides, you need to make sure you have a little maneuverability to go with all that WWE-style beatdown ability, or your cyclops will wade into a fight, take one swing and then stand around breathing heavy while all of your opponent's guys carve him up like a Christmas ham.

What with all the careful movement, planning ahead, and strategic positioning, Dirge feels a lot like chess, but with more blood. Yeah, a pawn can knock off a king, but can the pawn fly and shoot a bow? I think not. Bishops don't get to poison their enemies. You never see a rook make a straight run and then push aside the figures in his way. So it may feel a little like chess, but chess was never this exciting.

The bloodthirsty gamer in me is drawn to Dirge like a redneck to NASCAR. The game doesn't have a scoring track, or victory points, or scenarios. You play until one team is pushing up daisies, and the last man standing is the victor. Just like ultimate fighting, you don't let up until the other guy is crying for mercy.

I flat-out love Dirge. It's a kick-ass cross between chess and a miniatures game, it's beautiful, it's hand-assembled brilliance, and it's a blast. It's brilliantly tactical with a great gore-soaked theme. If I could ask for anything else, it would be expansions - I want more monsters. And a little birdie (we'll call him 'the game designer', because that's who he is) told me he's got one in the works.

But you want to know the downside? Small Box Games made 50 copies. That's right, there are 50 of these, and they're so much trouble to assemble that there won't be another 50. If you don't haul ass and pick up this game right now, you'll have to quench your thirst for blood by watching reruns of Indy 500 crashes.

Dirge: Carnage in Crimson is easily my favorite Small Box game. If you want to get it before it's gone, go here:
http://www.smallboxgames.com/dirge.html
Posted by Matt Drake at 11:53 PM

Nice review, Matt. Small Box has not disappointed yet and this game looks like a great slugfest. It almost reminds me of the battle boards in Titan and that is good enough for me!