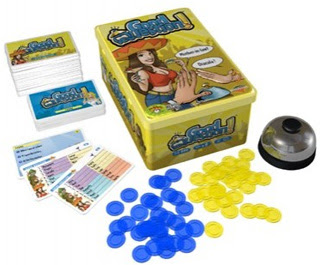 Not every game I play is meant for my gamer buddies. Some games work best when you're out at the lake house, or stuck in a motel room, or hanging out after a big meal. My usual pick for a neutral game for a crowd that includes non-gamers is a party game. And since you can't swing a dead cat in Target without hitting a party game, it's not usually hard to pick one out.

Good Question! is a party game from the same unhinged guy who made Ca$h 'N Gun$. But where that classic has players shooting each other with fake foam guns, Good Question! just makes you ask each other questions... which explains the name.

There are basically three components to Good Question! There are a bunch of theme cards, to give you an idea of a theme to use. There are question cards, that have answers on them. And finally, there's a little bell like you would ding to call a motel clerk back from his soaps. Technically, there are also little scoring chits, but it's easier to just use a pen and paper, so I didn't count those.

The way the game works, everyone is dealt a question card, which has 16 different words or phrases that are intended to be an answer. Then one player pulls a theme card and announces the theme for that round. Players take turns asking questions based on the theme and trying to get the other players to guess their answer. The trick is that you want the first two guesses to be wrong for maximum points, so it can't be too easy, but if nobody gets it, that's even worse because you get no points, so it can't be too hard.

Once every player has asked a question, the question cards are handed in and the next player picks a theme and it starts all over again. The game ends when you've run through 40 question cards, which typically takes about half an hour.

So we need an example (and this is where I go for cheap jokes and make the game do all the work). Let's say there are four players around a table - Joe, Doug, Anne and Kira. Joe picks a theme and announces that the question must be related to hospital stays. Anne thinks for a moment while Doug looks at her boobs (Anne's pretty hot, and Doug is a swinger). Then Kira has a question and says, 'I have a question,' which is a pretty appropriate way to announce that you have a question.

Kira says, 'I might have to stay in the hospital if I get bitten during-'

Doug, a one-track-mind kind of guy, interrupts and slaps the bell. 'Sex!' he says. Kira says, 'no, and you're a pig. The rest of the question is 'if I get bitten during a river tour of the Amazon by one of these.'

Joe slaps the bell before Anne can get to it and says, 'tarantula?' That's not quite right, so Kira shakes her head, and Anne goes, 'any kind of spider?' Kira's has chosen the word, 'spider' on her card, so Anne's answer is right. Since Anne was the third respondent (due to Doug being unable to focus), Kira and Anne each get three points.

Next Joe goes. 'I hate those little gowns that don't cover this body part.'

'Boobs!' says Doug, because he's a sex-addled moron. 'No!' says Joe, and hits Doug for continuing to look at Anne's rack, because Joe and Anne have been dating for a year now.

Anne is disgusted, but Joe and Doug go way back so she knows she can't just tell Doug he's an ass. Instead she says, 'your butt?' Joe's card does not say butt, but since Anne and Joe are dating, Joe pretends that his card did say butt instead of legs, and he and Anne each get two points, since Anne was the second one to answer.

Kira is skeptical. 'Let me see the card,' she says. Sheepishly, Joe hands her the card, and Kira says, 'This card doesn't say butt at all!' Then the game devolves into total chaos, with Kira leaving Doug to find his own ride home, and Joe and Doug getting into a fistfight in the kitchen while Anne finishes off the rest of the margaritas and goes to bed early.

OK, that was a convoluted example, and I'm not sure how much of it actually relates to the game. The point is, you get one point if you're the first one to answer and you get it right, then two points, then three, but then it goes back down again, so if nobody has it in five tries, it doesn't matter, nobody gets any points.

This is a really simple game to learn and play. It should be pretty obvious from this really long play example that only barely relates to the game that there's not a whole lot to talk about. But even if it is a very easy game to play, it could not have been easy to create. The words on every question card are carefully chosen, so that you can almost always come up with a good question using the theme and one of your answers.

For instance, here are some examples of answers you might find on a single question card (I pulled a card out of the game for reference, so I'm not making this up): Cage, 9 months, potato, Coca-cola, reproduction, and machine. Those are just six out of sixteen on this one card, so there's almost always something you could invent.

The theme cards are somewhat less interesting because of the way the game works. You can use them at first, if you want, but eventually you should be able to just take turns making up themes. In fact, the fifth option on every theme card is 'Theme of player's choice,' so you could just put away the theme cards and make them up as a you go. The less creative players might have to use the cards to choose between 'when I die,' 'long vacations' and 'the police,' but some people will just go, 'organized crime!' when it's their turn.

There are good point and bad points to Good Question! The good point is that my family really likes it, and asks to play it without any prompting. The bad news is that I can't get them to play what I want to play, like Shadows Over Camelot (with cheating, of course). It's not my new favorite game, but it appears to be a huge hit with my wife and kids. So rather than look a gift horse in the mouth, I'll just go play Good Question!, because it is pretty fun, even if it's not the kind of reckless Ameritrash I like to play.

Pros:
Easy to learn and play
Good variety on the question cards keeps the game from getting stale

Cons:
Not much depth - which is about standard for a party game

If you want to entertain your family or a group of friends, Good Question! might be just the thing. Get it here:
http://www.asmodee-us.com/games/party-games/good-question.php
Posted by Matt Drake at 6:57 PM

Sounds like a decent party game, or a great one with the family. I am guessing you can buy this one at Target?
Maybe they will come out with an adult version that is all sex related for Joe! Then he could win one.