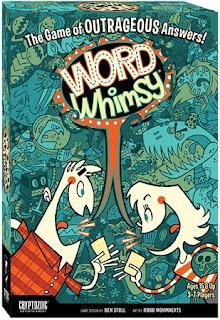 If imitation is the sincerest form of flattery, then the creators of Apples to Apples should be incredibly proud. Their stupid game has been copied so many times that it's starting to look like a good idea. It's been corrupted and twisted and abused so that it's almost difficult to recognize the original concept, but at the core, it's still pretty basic - one player chooses answers submitted by everyone else using no criteria whatsoever, and nobody really cares who wins.

The extreme version of the Apples to Apples concept is Cards Against Humanity, which relies largely on the strength of disgusting references to twisted sex acts and racism to amuse the players. For some people, this is absolutely hilarious; for others, it's too offensive to be funny. I'm on the 'hilarious' end of the spectrum, but not everyone is. And honestly, once you've seen the Pac-Man card, and the one about Glenn Beck getting badly wounded on a curtain hook, you will have just about run out of reasons to play Cards Against Humanity, and you will need something else.

The new game you want is Word Whimsy. If you like your answers to be in questionable taste, but you're not hoping for incestuous gay jokes, this one will get the job done. And the best thing is that, for the most part, the level of offense is up to the players. If you don't want to get 'Naked ninja sex' as an answer, just don't play with your Uncle Larry who actually would like to have naked ninja sex.

The reason this works is because Word Whimsy takes the Apples to Apples format and adds something that should have been in there from the start - multiple word answers. You'll get cards with words on them, just like in the other games, but instead of just slapping one down, you'll actually combine up to seven different cards. When the question is 'When the aliens come, I will show them my…', you can answer 'Majestic African children,' or you can keep it simple and just say, 'wiener.' Because yes, that is an option.

This card-combining element means nearly anyone can be funny, and now you have so much more control over the tone of your answers. No more complaining that you don't have any good cards. You've got seven, and you can use as many as you want. There are lots and lots of words on these cards, and they include such choice selections as 'sexy' and 'turd.' Those are two words that should never be used together, but the point is, you could. You should not, but you could.

Not only that, but as long as you can shuffle your cards (which could be a challenge, because there are hundreds of them), you never have to get bored with the same answers all the time. You could play for years before anyone ever has the cards in their hand to put together, 'dancing fuzzy bears,' and then it could be years before anyone has that combination again. Unlike nearly every other game in this vein, Word Whimsy can be played a hell of a lot before it gets repetitive.

Another nice thing about Word Whimsy is that everyone who plays gets a score. You give the most points to your favorite, but then you run them down the list, with your least favorite only getting one point. This is nice, because I don't know how many times I was forced to choose between 'demon weasel beast' and 'dirty humpers,' as answers to 'a movie I would definitely want to watch,' and was able to give them both a hearty recommendation.

As with nearly any of the games spawned by Apples to Apples, the point is rarely to win. I think scoring is only included so that everyone tries their hardest to be as funny as possible. I don't even remember who won Word Whimsy when we played it, because it was so fun that nobody cared. Our bellies were cramped and our faces were sore from laughing, our eyes were watering, and one of us had water come out of his nose (though the nose thing was just because he had a cold). I heartily disliked Apples to Apples, tolerated Big Bang Theory Party Game, and was amused by Cards Against Humanity, but Word Whimsy is the first one of these games that I actually said, 'man, we should play this more often.'

Not only is Word Whimsy a blast, it's cheap, too. If you go to Coolstuff you can preorder it for less than the cost of a loaded pizza.
http://www.coolstuffinc.com/p/187605
Posted by Matt Drake at 8:52 PM