Board Game Review - Princes of the Dragon Throne 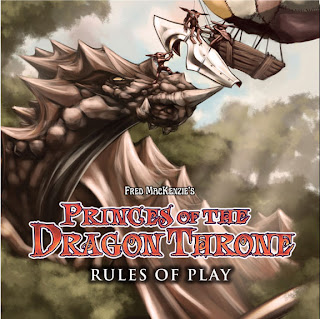 Deckbuilding games have come a long way. We started with Dominion (and other games that lead to that, but this isn't a full-on history lesson), had Arctic Scavengers and Nightfall and Puzzle Strike, and now we're starting to see games where building your deck is part of the game, but not the game itself. City of Remnants, for instance, capitalizes on a deckbuilding element without making it the focus, and now Princes of the Dragon Throne dials it up even further, by having deckbuilding be a minor part of a major game.

It's a funny phenomenon, though, when you look at it. If, like me, you've played dozens of deckbuilding games and watched the evolution of the genre, new ideas are interesting for the spin they place on an old idea. On the other hand, if you haven't ever played one, the concept can be bewildering, and jumping in on a game like Princes of the Dragon Throne is diving right into the deep end. Because on top of having to figure out that you've got your own deck and discard pile and shuffling and building, you're also trying to figure out how to best use your supporters to secure seats for your dragon lords as you gain favor in the merchant guild and earn the resources you need to feed the dragons you send out to let you build your deck. If you're a rookie gamer, this can be a giant circle of confusion.

However, if you like your games to present a challenge, if you like to see old ideas mixed into new concepts, if you like a little strategic planning with a dose of friend-screwage, you're going to like Princes of the Dragon Throne. It combines deckbuilding like you haven't seen before with area control and resource management. If you really prefer your games to come with some bloodshed and a lot of dice, forget it, but if you're a Euro nerd who gets wood for complex game mechanics, this one is going to make you take a cold shower.

There are so many layers to Princes of the Dragon Throne that your first play is going to be like opening up your birthday present and finding a well-dressed hooker, and then peeling off the expensive dress to find a vinyl catsuit, and then getting her out of that to discover amazing lingerie, and then getting that off to discover - well, if you don't know what you find when you get a hot woman naked, I would simply hate to spoil the surprise. This metaphor may have been overplayed, come to think of it. I probably should have gone with the Shrek onion, but you know what? I like gorgeous hookers, and I don't like peeling onions.

Anyway, there's a lot going on in Princes of the Dragon Throne. You're balancing the purchase of dragon cards with citizen cards, and you may need them to place your guys on the map, and you may need them to buy guys in the first place. You might be placing your supporters to get the favor of the particular guilds, but you may also be grabbing the guilds to gain access to the dragon lords. You might even be trying to gain a foothold in the orc realms, and not even care about the dragon lords or the merchant card, but you're just trying to stop one guy from running away with the kingdom. Not that you really know what any of that means, but my point is, there's a lot happening.

This is a lot of game. Princes of the Dragon Throne is not for new gamers, and it's not going to be a big sell with your typical blood-and-guts Ameritrasher. You don't get to kill people, which is a bummer, because you would think with all these dragons someone would at least get lit on fire. You definitely have to think about what you're doing, and if you're lost, you're doomed. But if you can strap on your big-boy britches and settle in to a mighty man-sized meal of a game, one with beautiful art and massive depth and a progressing game that builds to a climactic finish, you should seriously check this out.

One final note: This is a Game Salute game that is currently in a Kickstarter. If what I've said so far sounds fun to you, go support it, but don't get the upgraded kit with the 'better' meeples. They look cool enough, but they actually make the middle of the board more confusing and cluttered. I'm all for sexier game pieces, but not when they make the game harder to play. This one is virtually guaranteed to fund eight ways from Sunday, and that's great because it's a cool game, but don't fall under the spell of the unneeded upgrades.

Pros:
Cool new twist on deckbuilding
Exceptional depth
Lots of interaction, especially near the end of the game
Great art

Cons:
Feels too big with fewer players
Very European in flavor
Rather complex

If you like Euro games where the theme makes itself known and there's plenty of interaction, check out Princes of the Dragon Throne on Kickstarter:
PLEDGE ME, SEYMOUR
Posted by Matt Drake at 4:32 PM