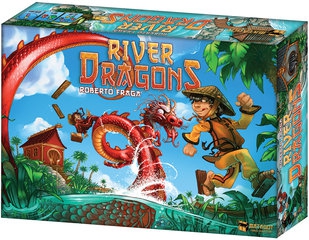 I love a game with a good gimmick (as opposed to games with bad gimmicks or cheap gimmicks, which don't usually work and then just irritate the piss out of me by making me suffer through this crap that some designer thought was a good idea but it turns out the game might be great if he had just got rid of this one stupid thing that doesn't work, but he refused to let it go because that was the part that made him think he was super-clever for inventing it while he was sleeping off a whiskey bender in his mom's garage).

River Dragons has a gimmick, but it's one that is actually pretty well implemented. You've got this board with a big pond in the middle, and you're trying to get your little rice-paddy worker to the other side by tossing rocks in the water and stretching boards between them to make the world's least secure bridge. In fact, River Dragons adds a second interesting element to the game by having you plan your turn, selecting five cards that represent your actions for that turn that you will take in the order you selected them.

This second part is kind of like Robo Rally, one of the many games I have played that have caused me to wonder if everybody who loved it had extensive brain damage. I freaking hate Robo Rally, but I know lots of people are big fans. That thing where you hem and haw over a pile of cards, trying to plan your turn to the last detail, and then watch it all go directly to hell because someone else is messing with you - that drives me nuts. Not only do you get to see the absolute worst of the guy who can never make up his mind, so that you're done planning your turn and then the other guy is just sitting there looking at his cards, picking up his cards, putting down a couple, swapping them out, then grabbing them all and starting over. But on top of having to sit there while one guy takes forever (and it seems the identity of this culprit changes every turn - one turn you've got it all figured out, and the next turn you're the one delaying the whole table), then you play out your turn and all your plans fall apart and you wind up falling into the water, or into a pit full of sharp saw-blades, or into a two-day marathon of The Real Housewives.

To make things more interesting (or more painful, depending on your point of view), everybody has dragon cards that will negate a card chosen by another player. So you decide to lay down stones, then lay down planks, then hop onto your new bridge - but someone plays a dragon on you that kills the card where you built a path, and since your rice farmer is an idiot, he skips the part where he makes a bridge and just runs headlong into the water. That kind of random silliness makes for great fun - if you like games where you spend five minutes making plans just to watch them go up in smoke because your rice farmer is a drooling buffoon.

So I am not a fan of River Dragons just because I don't like those mechanical planning exercises, but there's an even bigger reason I didn't like River Dragon - the gimmick is fundamentally flawed. When you play the card that puts a stone in the water, you actually pick up a little gray disc and place it on the board. Then when you place a plank between two rocks, you pick up a flat tongue depressor and put it down. For both of these actions, you use your fingers. You remember your fingers? The ones shaped like breakfast sausages that fumble anything smaller than a shovel handle? Yeah, those fingers.

It sounds like I am a clumsy idiot, but I'll tell you, my hands are plenty steady. I painted all my Warhammer Quest minis (before it went up in the fire) and I'm almost done with my Super Dungeon Explore miniatures. I can paint the eyeball on a kobold and then add a pupil and a white dot that makes it look glossy. I have some control over my hands, but River Dragons made me feel like I was a half-drunk autistic man with cerebral palsy.

Let's assume that you have enough of a gentle touch to balance the plank where you need it. Then when you move, you pick up your little cone-headed pawn and place him on your makeshift bridge. But because your bridge is made out of slick, nearly frictionless wood, it instantly slides out from under your guy and sends half the board into complete disarray. Planks and stones and rice farmers are scattered everywhere, and the best you can hope for is that you can rebuild the board before you forget where everything went.

This gimmick would have worked if the pieces didn't slide around so much. I know this because, frustrated with my inability to finish the game before it fell apart on me, I went and bought a pack of that sticky goo you can peel off in chunks and use to hang posters in dorm rooms (as opposed to if you own your house, in which case you actually use a hammer and nails, because that's how grownups do it). I applied thin layers of this sticky crap to the bottoms of the planks, and then played again - and it worked great, and I actually enjoyed the gimmick. I didn't enjoy the game, but that was just a personal preference thing because I hate programmed move games.

Now, if you can get past the slickery pieces that turn River Dragons into a game of pick-up sticks, the components in this game are actually very, very nice. I mean, this is even nice for an Asmodee game, and that's saying something because Asmodee makes some truly gorgeous games. The individual pawns are all painted with different little rice farmers (you can tell they are rice farmers because they have cone-shaped hats). The different-length boards have numbers so you know if you've got the long one, and they're made out of real wood. The illustration on the board is beautiful, and the art on the cards could be framed and used to decorate your house. I mean, this is one good-looking game.

So, to sum up - if you like programmed move games, and if you don't mind sticking Blu-Tac to the back of every plank in the game, you might really enjoy River Dragons. If, like me, you dislike games that feel like math exercises with an unhealthy dose of chaos, or if you think your games should be ready to play when you get them, I would skip this one and try something else.

Cons:
I hate clever planning mechanics
Wooden planks slide all over the damned place and make it virtually impossible to play this game

I seem to have procured another game that isn't out yet. Keep your eyes peeled, it will come out sooner or later, I'm sure.
Posted by Matt Drake at 6:19 PM