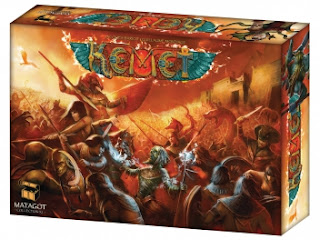 Ancient Egyptians had the coolest stuff. I mean, I love my iPad and my cable TV, but they had houses that could teleport them and they could adopt giant snakes and ride on their backs. I would definitely trade my iPad for an enormous scarab beetle I could ride to work, especially if I could train him not to poop in the house.

Of course, it wasn't all sunshine and roses. In exchange for all their awesome magical crap, they also kind of died a lot. And by 'kind of died,' I mean 'really, really died.' If they weren't being slaughtered in battle, they were being sacrificed at temples or murdered by their gods to be converted to currency. I guess those elephant-ride commutes were even more expensive than my car payment.

And now, so that you can understand how awesome it is to have a giant flaming bird for a pet as you travel through the desert via obelisk-powered magical subway, you can play Kemet. It's a game recreating all the exciting and historically accurate battles of old-school Egypt.

No stone has been left unturned in an attempt to make Kemet true to its source material. You'll start out in cities, each with three pyramids built inside the walls, and each city is just as far from each other city, because that's how the Egyptians did it. You'll summon moderate-sized armies, but not too big, because the Egyptians couldn't put too many people in one place. And you'll travel by magical portals, because ancient Egyptians did that, too.

Another thing ancient Egyptians did was fight all the time, and so you'll do that, too. In fact, where some games might allow you to win even if you never get in the big battles, in Kemet, the main way you earn points is to win fights. The whole game only goes to eight points, but since so many of your points are only temporary and can be stolen just by booting you out of the temple you thought was yours, it's hard to hold on long enough to sweep in for a quick win. Better to play it safe and just kill people.

Now, most games would let dice tell you who wins fights, but Kemet throws out the dice, making the game even more interesting. You'll choose your battle cards from your hand, and they'll tell you how hard you hit, how many people get killed, and how well you can protect your hard-working grunts from painful stab wounds to the buttocks (usually, you can't, and they will die). Because you don't get your cards back until you've played them all, there's a great mind-game that plays out with lots of bluffing and psyching out your enemy to make him over-commit.

Kemet is a hilariously fun game of killing people and grabbing land, but it's not like your average big-map rumble. For one thing, you have those limited actions that make sure you know it came out of Europe. For another, you've got prayer points as currency, and you'll use your prayers for all kinds of stuff, like building pyramids and buying special powers and yes, teleporting. Because Egyptians did that.

The special powers are more than an add-on to the game. In Kemet, the powers will give you those giant critters to add to your armies, or make you meaner on the attack, or let you field larger armies (or a bunch of other stuff). You have to power up your pyramids to get the best powers, but if you spend the whole game focusing on getting the best tricks, you'll lose to the guy who jumps out and starts kicking his friends in the teeth. Those powers are great, but you can't lose sight of the overall goal, which is to kill an awful lot of people, really fast.

Now, one thing we know the Egyptians did really well was that they made stuff look amazing. Kemet follows this tradition, with huge marbled dice to be your pyramids, chunky plastic monsters you can put in your armies, and beautiful art for - well, everything. To illustrate how much care went into making Kemet a drop-dead sexy game, consider the fact that the sculpts for your soldiers are different for every color. They didn't have to be. They just are, because that makes it cooler.

I've played Kemet with anywhere from three to five players. I've never tried it with two, so I can't tell you if it's awesome that way, but I can confirm that it's just plain outstanding with three, four or five. It's exciting and chaotic, fast and brutal, smart and strategic. You'll have to create enormous open graves to dispose of all the guys who get killed as you play, and you might catch yourself drooling over the amazing pieces included in the game. It's like the designers made it with me in mind. Kemet is one hell of a fun game.

And as an added bonus, it's totally accurate.

Coolstuff has this one in stock and woah, is that a good price.

know when it will arrive in UK?

I am not sure you read your old posts, so this is a bit off topic.

Thank you for making me discover Brandon Sanderson, I absolutely loved the mistborn trilogy and followed that by starting (and finishing) the wheel of time series.

Yeah, Mistborn rules. My pleasure, Muxx, and thanks for reading!