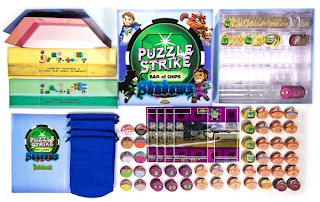 I don't feel like writing. Just read this review, because everything I could say about the base game applies to Shadows:

Ha ha! Just kidding! I would not be that lazy with a game review! You deserve more. Also, my guy at Game Salute would get pissed and quit sending me review copies. That's the real reason.

So hopefully by now you've read the original Puzzle Strike review. Everything I said there applies here. Just don't read the review of Third Edition, because in that one, I make a huge boner mistake and sound like an asshat. I mean, more than usual.

Shadows is a standalone expansion for Puzzle Strike that has everything that was in the original Puzzle Strike box, except it's all different. Well, most of it. The standard chips are the same, but the chips you can buy are different, and so are the characters. There are, however, the same number of chips, and the box is the same size. So, I don't know, it's the same, but completely different.

The new stuff in Shadows is really the reason to pick it up. Presumably you've been playing the original Puzzle Strike so often, and have so many games under your belt, that you desperately needed a new box of puzzle chips so that you could do completely different stuff. That was not really me - I don't have time to play anything as often as I would like - but if it's you, stop reading and just go get Shadows.

On the other hand, if you're on the fence, you should know that the new stuff in Shadows feels more in-your-face. We set up one game where we deliberately put all the underhanded, nasty, dick-punching chips in the middle of the table, and it was ridiculously fun. It was also mean as hell. How those people are still my friends, I can't really say.

I like the actions in Shadows, too. There's one cheap chip that gives you a huge turn - but then you lost the chip forever. There's an attack that throws just a little pain on every other player, and you can do it as often as you want. There's one that I think is horribly overdue, where you get to just go find your character chips. Basically, Shadows has a lot of variety, and it's not just rehashed crap from the first time.

Let me boil this down. If you like Puzzle Strike and want more of the same, but different, that's what Shadows is. If Puzzle Strike comes out of your closet every six months, and then you play it twice, there's no reason to throw more money at this one. If you haven't bought either one yet, I like Shadows better, but it's got more advanced strategy, so it's really not for beginners.

Come to think of it, the entire review could have been that last paragraph, and you would have had everything you need to know. I wrote more so that publishers wouldn't think I was lazy.

Do you want this? You can get it here:
http://www.sirlingames.com/products/puzzle-strike-shadows