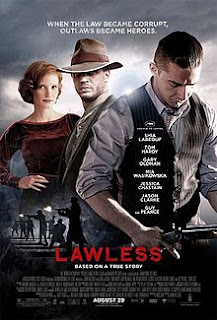 I'm a fairly shallow guy. I like sci-fi movies, superhero movies, tough-guy-shooting-people movies, and mob movies (only when I was a kid, we called them gangster movies, but we can't anymore because now that doesn't mean Al Capone, it means guys who buy pants that don't fit). So when I saw the trailer for Lawless, I was like, 'hey, that looks cool!' even though it had Shia LeDoof, and I freaking hate that guy.

I should have taken a hint from the fact that the stupid kid from Transformers was in the movie. That should have been my clue to avoid the movie completely. But it had the guy who played Bane! It had Gary Oldman, for crying out loud! How bad could it be?

Pretty bad, is how bad. It could be pretty bad. Which is to say, it was pretty bad. About halfway through the movie, my wife goes, 'do we have to finish watching this stupid movie?' and I said, 'at this point, I have to review this movie so that I can find some way to get back at the bastards who made it. And that means I have to see how it ends.'

Lawless tells the meandering, unfocused tale of three hillbilly brothers in Virginia who run moonshine during the days of prohibition. There are cool old cars, tommy guns and cops on the take. That alone should be enough to redeem it, but they made the worst mistake they could have made, given the casting - they focused on the lamest character in the whole story.

Shia TheDouche is the star of Lawless, and while I was hoping to see him maybe redeem himself by being something other than the awkward halfwit he plays in every other movie he makes, I was disappointed. He was exactly as useless as he always is (with the possible exception of the latest Indiana Jones movie, which I actually enjoyed despite the stupid ending and the fact that it had Shia DeFruit). He can't shoot a gun. He can't woo a woman without throwing up. He makes stupid mistakes that get his family whiskey still burned to the ground. And he's a candy ass, to boot.

Guy Pierce is also in Lawless, and I actually like him. He was awesome in Memento, and outside of that weird thing where he's the crossdressing performer with the bad guy from Matrix, I can't think of one of his movies where he wasn't pretty great. Except for this one. In this one, he's a deviant freak who murders children and abuses women, and also shaves a weird line down the middle of his head. I get that he's supposed to be the bad guy, but the director sent him so far over the top that he's barely recognizable as a human being.

I blame the writing and directing for the horrid failure of Lawless. They had a great story to work with, one where three fiercely independent and almost preternaturally tough brothers (not counting Shia TheGoof) make their own deals, defy the rule of law, and kill people when it's good and necessary. This could have been exciting and gritty and awesome. Instead it's a story about a weak-minded dingbat who wishes he was a bad man, but instead he's a loser who gets people hurt all the time by being an incompetent boob.

It's not just the misplaced focus that messes up this movie, either. The pacing is horrible. There are some fantastic scenes of death-defying raw heroism, but they are few and far between, being punctuated with stuff so odd and yet still so boring that you will wonder who thought this would make a good movie. Or rather, you would wonder that, if you were to ignore my advice and watch this movie.

Obviously, the director and writer of Lawless were going for a mood piece. They wanted to show what life was like, to give us some insight into the American South during Prohibition. But they also wanted it to be a little surreal, a little odd, to show us how different life was for people who lived in crappy houses and had crappy clothes and made whiskey in tarpaper shacks deep in the mountains. We could have seen all that without the terribly bizarre church service or the disturbing sex crimes, but the creators of the movie wanted to turn a straight-up bad-ass gangster movie into an arthouse flick.

If I were to offer any advice, I would tell you unequivocally not to watch Lawless. It's not even silly-bad or fun-bad or laughable-bad. It's just bad-bad. I haven't been this irritated with a movie since Deathproof. The story that takes place around the main character would have been really cool, but sadly, the best parts are background, and the foreground is wickedly lame and almost painful. Skip this one.
Posted by Matt Drake at 7:44 PM