Expansion Review - Rise of the Demons 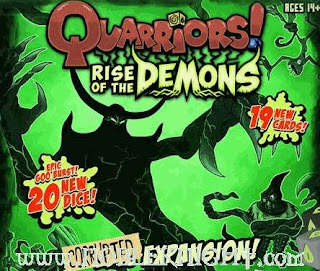 It's Quarriors week! Because I have Quarriors expansions to review. I already reviewed Quarriors, so that only leaves two expansions, which means that Quarriors week is only going to last until Wednesday, and then I'll have to write something else for Friday.

The first feature of Quarriors half-a-week is Rise of the Demons, a rather small expansion for Quarriors that really only introduces three new things - a new spell, a new critter, and a new type of crappy die that you can give to your friends to make them angry with you. But it also has a bunch of cards that add to the ones in the big tin cube version of Quarriors (otherwise known as the base game) and make them all corrupty (corrupty, as it turns out, is not a real word).

You wouldn't expect that three little additions would make the game completely different, but they kind of do. Quarriors in its original form isn't all that involved, although it is a heck of a lot of fun. Just about anything you decide to add to your burgeoning dice pool (burgeoning, by the by, IS a real word) is good, and even if you don't build an efficient dice pool, you can still get some good rolls and make stuff work.

But with Rise of the Demons, you now have corruption dice, and they are pretty much completely bad. With very few notable exceptions, corruption dice will just make you sad. Not like actually sad, or anything, just sort of frustrated. And they're kind of fun, so you won't even be all that frustrated, just kind of irritated. But whatever unpleasant emotion corruption dice make you feel, the point is that having them is generally considered not good at all.

Unfortunately, if you're using the cards in Rise of the Demons, you'll have lots of chances to get those unpleasant corruption dice, and when you do, you will see a marked decrease in your spending power, your ability to summon minions, and your ability to have a bag full of dice that look like candy (because the corruption dice are gray and kind of ugly). They mostly take up space and don't give you anything, but sometimes they will let your opponent score points or make your guys easier to kill or otherwise make you go, 'dammit!' in a loud voice that will frighten the dog because he thinks you are yelling at him.

(For the record, it's a good idea to holler at your dog from time to time, because chances are, he's up to no good. Between getting on the furniture, chasing the cat or pooping in the living room, dogs are mischievous little boogers. There's almost no downside to keeping them on their toes.)

The corruption dice in Rise of the Demons, along with the new corrupted creatures and the cool corruption spells, really do change the way you'll play the game. Depending on what's on the table, you might go for an aggressive strategy that deliberately loads up your opponent with corruption dice, or work to avoid getting any yourself, or even take an all-or-nothing approach that lends you a lot of power at the cost of sucking up a bunch of those nasty dice. The game can last a little longer, but every now and then you'll see a combination of stuff that lets you break out some serious beatdowns and score crazy points for sudden wins. The game still plays out in less than 45 minutes (and usually less than 20 minutes), and it's even more fun than before.

The thing that Rise of the Demons really adds to Quarriors is a bit more strategic depth. And while I still hold that the original is a blast (I've played at least twenty games now), if there's one thing it needed, it was more chances to do smart stuff. There were just too many times that the best choice was the most obvious. But toss in Rise of the Demons, and new strategies will abound. This is a fun, solid expansion to a fun, solid game, and if you're a fan of Quarriors, I can't imagine a reason not to pick this up.

Cons:
Not a whole heck of a lot in the box

If you like Quarriors, you should run over to Noble Knight Games and pick up this kick-ass little supplement real cheap:
SCOOP SOME CORRUPTION SLIME
Posted by Matt Drake at 2:58 PM