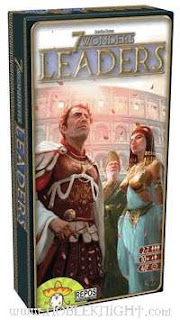 If I ran an ancient civilization, it would be called Drakatonia, and I would rule it with an iron fist. I would be an immortal god king, sending bloodthirsty soldiers to every corner of the globe to bring me back tasty exotic fruits and the heads of my enemies. I would have a harem the size of Madrid, and a collection of rare action figures (all of which would be carved out of stone, because this is pre-plastic).

And if I had a card in 7 Wonders: Leaders, my special ability would give you one extra victory point. As a leader of warriors, I would rock. As a Leaders card, I would be underwhelming.

But then, most of the cards in Leaders grant an incredibly minor benefit, so I would be in good company. Sure, it's great to have King Solomon let you root through the discard pile now and then, but am I the only one who remembers that he was the guy who would cut babies in half just to shut up their mothers? Compared to what these leaders did in real life, I'm a little underwhelmed by their translation to board gaming.

However, the purpose of the Leaders for 7 Wonders is not to show off what total bad-asses the real people were. The purpose of having the Leaders cards is to make the game more fun to play, and in that regard, they're absolutely successful. They create an additional layer of strategy that will alter the way you play the game.

For instance, if you have Aristotle, he adds victory points for building scientific resources. This means, obviously, that you will want to do more science. You may want to do more science anyway. After all, if the movies are to be trusted, science can help you create Kelly LeBrock in your attic, and she will make you very popular and also shower with you.

Different leaders provide different effects, too. Many, like Amyitis or Nefertiti, have silly names, but can also grant additional points at the end of the game. Some help out right up front, like Hannibal, who is worth one extra point of warmongering, and who loves it when a plan comes together. Some cards help you build stuff, like Hammurabi, who will help you build blue cards as long as you can pronounce his name properly. Others just provide one-time bonuses, like Croesus, who just gives you a bunch of money and then goes off to cry in the corner because he isn't as cool as Leonidas.

You only get three chances during the game to play leader cards, and every time, you have to pay for them. That makes sense - nobody works for free, except Doctors Without Borders and the guy who washes your windows while you're waiting at a stoplight (and he would really like a tip). So you'll have to balance their worth against what they can offer - Archimedes can help you come up with science stuff on the cheap, so he would be good early in the game, while Alexander offers extra points for winning battles, so you wouldn't want to play him until the end.

In typical 7 Wonders fashion, you won't get to pick your leaders. You'll have to do the standard pass-around-the-table at the beginning of the game, so you might not get the best combination of brilliance. That's part of the game, though, and adds to the litany of painful decisions you're going to have to make while you play. Keep Vitruvius and get paid when you build for free, or pass him along and keep Caesar, so you have someone to stab in the back when you lose (that's not his actual ability, but you never know, it could come in handy)?

If you hate 7 Wonders because it's so wildly popular and wins so many awards, then you're probably not going to be rushing the gates to pick up the expansion. But if you're a fan of one of the most clever games to hit the market in 2011, Leaders should be in your online shopping cart (or you could get it at a game store, assuming you like paying retail). It's actually a pretty simple decision - if you like 7 Wonders, Leaders will make the original better. If you don't like 7 Wonders because you would actually like some interaction in your games, Leaders isn't going to change your mind. And if you want to join Drakatonia, just bring your driver's license, some exotic fruit, and the head of someone I hate. I'll be at the job fair in the Howard Johnson's.

Pros:
Adds new layers of strategy to the game
Focuses your play style a little, so you're not just slapping down random cards every turn
Same great art that makes the original game so much fun

Cons:
Doesn't add any more interaction than was already there

If you've got the guts to be a Drakatonian shock trooper, then you probably have enough sense not to pay retail for your games. You can visit Noble Knight Games and get Leaders, and save a bunch of money. Smart soldiers don't pay retail.
RECRUIT YOUR LEADERS
Posted by Matt Drake at 5:46 PM