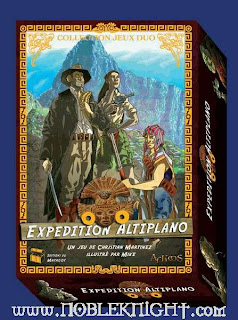 Ohio Bob slipped past the ancient guardian statues and made his way through the jungles surrounding Machu Picchu. Wiping the sweat from his eyes, he entered the gloom of the ancient temple, eyes casting about for clues to the location of Maco Capac's mummy. There, in the darkness, he spotted the ancient treasure. He grabbed it and ran for the door.

Then a jaguar ate him.

That's about how it goes when you're playing Expedition Altiplano. You'll concoct intricate plans designed to grab the treasures before your opponent can assemble his team of raiders and archeologists, and then he'll throw down some mishap and totally hose everything you were doing. But then next turn, you'll do the same to him, so you can't be mad for very long.

Expedition Altiplano is reminiscent of the opening scene from Raiders of the Lost Ark. Two rival groups of treasure hunters will enter the South American jungle searching for ancient artifacts, and the first to recover two treasures will win the day. Along the way, you'll be attacked by angry natives, hungry anacondas, and villainous rivals. You'll also fall in a hole.

It might seem like the various misadventures in the game could make Expedition Altiplano an exercise in random frustration. After all, the entire thing is played with a shared deck of cards, and if you happen to pull all the treasures, you'll have a heck of a lot easier time winning the game.

Short turns let you do no more than two things, so you're never going to build some runaway strategy that nobody could ever stop. Every time you make a little progress, the other guy is going to get a chance to knock you down a peg. Every move you make is important, especially because you can only add cards to your camp on the second (and final) action of your turn - so you better make them count.

The theme of rival archeologists pursuing ancient treasure in the jungles of Peru fades into the background pretty quick, but there are a few things that keep the story alive when it threatens to turn into a back-and-forth festival of card-based screwage. The art is fantastic, for starters, and doesn't pull any punches. If a giant rock falls on your head, after all, there's going to be a lot of blood. That's not coming out of the carpet. Your wife is going to be pissed.

The story also plays out through the card actions. Even though some of them don't make a lot of sense (why does Marcus Vidor store cards like a portable storage shed? I don't know. He's not even that fat), most of them have really cool abilities that make plenty of sense. The hunter negates animal attacks (presumably by turning the angry beasts into throw rugs) and the black-hearted rogue will steal treasures right out of your opponent's hand, then say, 'Again we see there is nothing you can possess which I cannot take away'. Lots of stuff that happens makes sense, from both a narrative point of view and just good card play.

One advantage to Expedition Altiplano is the time you'll spend playing. Like many of my favorite games, it ends before it wears out its welcome. You can sit down, explain the rules, deal the cards and do ridiculous amounts of murder in the name of archeological progress. And when one of you finally manages to capture the final priceless relic, you'll look over at the clock and be amazed that half an hour has passed. Time flies when you're having this much fun, and yet you can still finish the whole thing while you're waiting for the pizza guy.

Expedition Altiplano is a fast-paced, attractive game that does a nice job of balancing solid game design with an exciting tale. The longer you play, the more you'll see the strategy unfold, and when you have a good grasp of the cards you can expect to see, you'll be more prepared for the unexpected mayhem your opponent will throw at you. It's a great two-player game that you can enjoy when you have half an hour to kill, and if you've got more time than that, you can always play it again.

Pros:
Very cool art
Subtle strategies and tactics emerge as you learn the game
Tells an exciting story, if you bother to pay attention

Cons:
The theme is very important to the game, and game play can overshadow it

Noble Knight Games has a pretty good deal on Expedition Altiplano, so if you're in the market for a fun two-player game that you can finish in a hurry, check it out:
HA HA DOCTOR JONES YOU FUNNY
Posted by Matt Drake at 2:53 PM