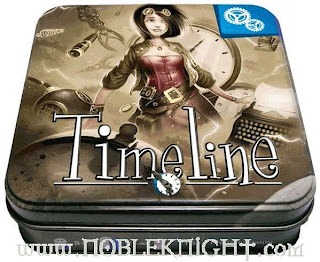 Sometimes I wonder about game publishers. I know there's this constant race to publish more stuff in an ever-running race to keep up with the Joneses (and by 'Joneses' I mean 'Fantasy Flight'), but I am often distressed at the poor judgment shown in choosing titles and themes. I don't think many people would be interested in watching a riveting television show about people who arrange cardboard boxes for a living, but for some reason, publishers seem to think that would make a fascinating board game.

By way of example, here's an idea, and you decide for yourself whether it would make a super fun game:

Which came first, the lightbulb or the electric can opener?

If you thought, 'man, I would love to answer questions like that for, like, half an hour!', then you're in luck, because there's a game that does that. If you thought, 'who gives a rat's hairy ass?', then Timeline is almost certainly not going to appeal to you. Me, I don't care whether the cannon preceded the airplane. I just want to know if I can use the former to blow up the latter.

Maybe it's just me. I prefer games that would make cool movies. And a painfully academic discussion regarding the creation dates of various advances in humanity is not anywhere near as interesting as a bunch of robots blasting at each other with laser cannons. I'll take the robot game every time.

I can tell you that Timeline has considerable educational potential, as long as you just want people to learn if the wheel predated campfires. You'll take turns placing your cards in the line on the table, and if you can figure out if the astrolabe comes before the cuneiform, then not only will you probably win, but you probably don't need to play. Because if you know what an astrolabe is, and you know what a cuneiform is, you're probably too smart for Timeline, anyway. You're almost certainly too intelligent to be reading this knuckle-dragging website. You're probably just slumming, checking to see if I'll make a boob joke. (Hint - I probably will, sooner or later.)

Timeline confuses me. It's got tons of beautiful art. It comes in a metal box with an embossed lid. And yet the entire game is only a pile of small cards, and the only thing you do in the game is try to remember pointless tidbits of data you may have learned in seventh grade and have since forgotten, because you don't actually have any reason that you would need to know when someone made the first Dutch windmill.

I do have to admit that some of the stuff I learned surprised me. For instance, did you know that spectacles predate whiskey? That was actually pretty lucky, because if you're going to get totally sideways, it's super handy if someone has already invented a way for you to see the road you'll travel to stagger home. If you play Timeline, you're almost guaranteed to learn something. The only problem is that unless you're a junkie for dates, you probably won't care about anything you learn. And sadly, you probably won't have a very good time learning it, which makes it about as entertaining as eighth-grade US History, but without having to listen to the soporific droning of the girl's volleyball coach who got roped into teaching the class.

Cons:
Not really very fun
You'll probably forget everything you learn before you finish the game

There's every possibility that you might actually want to know all these dates. It might come in handy if you're ever abducted by aliens who will determine your fate based on your knowledge of your home world. You might also be a teacher who wants to try to trick kids into learning things. Either way, you can get Timeline from Noble Knight Games, real cheap:
GIT SOME LARNIN'
Posted by Matt Drake at 10:06 AM