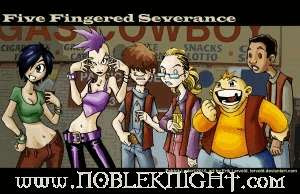 I'm running a low-grade fever and just generally feeling run-down, like the Energizer Bunny just left my house and took all the batteries with him. I know that making jokes is going to be harder than normal, and that would have me concerned, except that Five-Fingered Discount is going to do me a big favor and supply all the jokes for me. I am grateful.

Five-Fingered Discount is one of the new crop of games from Minion Games, a plucky little publisher making a good solid run at being a contender. They're not really all that small, either, and they're not shy. They made several solid games, then turned around and made several more. So I had high hopes for a game about a bunch of teenage asshats who trash their employer's convenience store on the day they all get pink slips. Whenever you've got a game where one possible action is to urinate in the coffee, you've got potential.

The goal of Five-Fingered Discount is to get up to as much teenage hijinks as possible before you get fired, because at the end of the day, everybody is unemployed anyway. I guess using standard teenager, short-term mentality, you might as well trash the place if you're not going to have a job. That's the same sort of mindset that leads youngsters and hooligans to throw toilet-paper all over the school on graduation day. It's embarrassingly stupid, but still ridiculously gratifying.

So you'll wander around the store, stealing stuff and insulting customers and generally making a nuisance of yourself, until the boss catches you having a fire-extinguisher fight in the stock room and sends you packing. Of course, since you're an idiot teenager with a horrible attitude and no loyalty to speak of, you'll also rat out your fellow employees so that the boss runs off to yell at them for taking all the money out of the cash register. That way you'll have time to break into the ATM machine.

Reading through the rules, it's pretty obvious that Five-Fingered Severance is a funny, light-hearted game with plenty of potential to be horrible to your friends. What is not obvious until you play is that it's also a cluttered mess. It's actually kind of a shame, because I love the campy drawings and the idea of making out with old ladies in a convenience store restroom, just because it's better than mopping up the mess in aisle three.

The game starts out OK, with a few actual jobs you can do to avoid getting fired sooner, a couple customers to mock, and maybe one or two ways to completely blow off your duties, like watching a movie in the boss's office or stashing Slim Jims in your drawers. But it very quickly escalates into a sloppy disaster, as tasks like sweeping and inventory start to crop up everywhere and customers invade the store like the Visigoth hordes. After just a few turns, there's so much to do that you couldn't possibly keep up with everything, the board is covered with cards, customers are everywhere, the boss is getting irate about the mess behind the register, and all the employees are trying to steal the computer or blow up the walk-in freezer.

Some games give you such limited options that it can be tough to find anything meaningful to do. Five-Fingered Severance gives you the exact opposite problem, because you can only do two things on your turn and there could be twenty different options on any given turn. You're faced with an almost unrestricted array of options, and not nearly enough time to do it.

I went into Five-Fingered Severance with nothing but high hopes. Show me a game that asks me to choose between throwing a Slurpee on a co-workers pants and deliberately microwaving a can of Pepsi, and I'm all over it. The rules are funny, the art is hilarious, and the overall theme of teenage amorality reminds me of when I used to work at Shakey's Pizza and we made Shrinky-Dinks out of the take-out salad lids by cooking them in the giant ovens. But with all the thought that went into the concept, not enough work was put into the execution. Five-Fingered Severance is fun to play for the laughs, but not a good enough game to be played more than once.

Cons:
Too many options create clutter and eliminate meaningful decisions

Five-Fingered Severance isn't a bad enough game that I'm going to recommend you avoid it like the plague. If you think it sounds like a hoot, you can pick it up from Noble Knight Games:
STEAL A BAG OF CHIPS
Posted by Matt Drake at 8:48 AM

Totally disagree with your assessment, for once. I think this is one of the best games I've played in years.

As for "clutter", while the game has a lot of shit going on as far as tasks to complete, saying the game has no meaningful decisions is simply not accurate in my view.

This is full of meaningful decisions, and timing is crucial in a lot of them.

Play it with me Matt, and I'll change your mind.