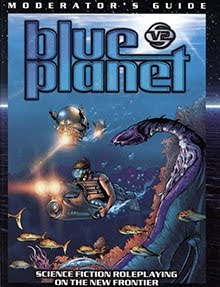 Blue Planet has always been kind of an elusive game for me. It's not that it's not interesting. In fact, it has one of the most compelling settings I've ever seen. It's incredibly well-developed, with a fascinating world that puts the 'science' in 'science fiction' and a system that makes hydrofoil gunfights and alien exploration feel real. You don't have to suspend much disbelief to play Blue Planet, is what I'm trying to say.

But it's hard as hell to play. The system itself isn't too terribly tough to puzzle out, though it does use some counter-intuitive addition and subtraction to make it all work. The reason it's hard to play is because there's so damned much of it. The referee's guide, for example, is like 300 pages with no rules at all. It's all setting, discussing various settlements, corporations, political groups, and of course a wide variety of flora and fauna. There are discussions in there about how the vacuum of space actually works (turns out, it's completely different from a Shopvac. Who knew). You can read about how tides are generated, about how water pressure affects living creatures, and light sources on the bottom of the ocean. There's more than you ever wanted to know about oceans, unless you're a marine biologist, in which case we can only hope you get your information from something more reliable that a roleplaying game. Like, say, Wikipedia.

The reason you need all this intel on the ocean is because Blue Planet takes place on Poseidon, a planet covered almost entirely with water. A wormhole at the end of the galaxy drew mankind to this alien planet, which was inexplicably similar to Earth (except, you know, it's like a giant bathtub). Humans sent a colonization ship with the best and brightest, and they began to make Poseidon their home, and get ready for the relief ships.

Unfortunately, a little bit after sending those first colonists, Earth got kicked in the ballsack by a crop-eating disease that threatened the extinction of the human race. Space colonies took a back seat to not dying. It took a real long time to get the corn fungus under control, and meanwhile, the colonists on Poseidon were on their own. With no resupply and no real access to stuff like power plants or microwave popcorn, they made a hard choice and decided to go native. It took less than a generation before they were all dressing like hula dancers and spearfishing for a living.

But then, after the colonists had decided they would get by just fine eating the local fish and building straw huts like Gilligan's Island, Earth got its act together and sent more ships. By then, the original colonists didn't much care, but Earth sent more people anyway. Then someone discovered this crazy mineral on the bottom of the ocean that unlocked the human genetic code, and there was a crazy gold rush as everybody with two dimes to rub together tried to board an outbound flight and cash in on what they thought would be easy riches.

Well, they were wrong. Poseidon is a mean-ass planet. There are sharks so big, they make Jaws look like Spongebob Squarepants. Just walking through the jungle on one of the few islands can get you eaten by lizards, stung by insects, or strangled by plants. And out at sea, it's even worse, because without land masses to break up the storms, whole towns can be swept right out to sea and vanish completely, and boats can disappear so fast that nobody even knows they were ever there.

But humanity is pretty mean its own self, and so before long, towns popped up, industry blossomed, and gigantic corporations moved in and declared eminent domain over any piece of land bigger than a toenail. Before you could say, 'what was I thinking,' there was organized crime, corporate shenanigans, and all manner of tiny wars (actually, it probably took a little longer than it took to say 'what was I thinking.' It probably took a couple years, and I figure you could say quite a bit in two years. But whatever, it was pretty fast). And that's where you start.

Characters in Blue Planet can come from a wildly varied range of background. You could be a native, one of the original colonists, genetically modified with gills and collapsing lungs so you can swim like a fish. You could be a silva or cat, genetic crossbreeds made by combining people with apes or, well, cats. You could be a prospector, or a frontiersman, or a corporate hacker. You could be a cop or a gangster, or even just the pizza guy (hey, pizza guys sometimes do interesting stuff. Just not my pizza guy. I'm pretty sure my pizza guy still lives with his mom). You could even be a dolphin. I'm not making that up.

One important consideration, no matter who you want to pretend to be, is that the system for Blue Planet can be seriously deadly. You're not going to rush into a room against superior numbers and just slash your way through. You can actually kill someone with a knife, and bullets are shockingly effective (you can kill someone with a knife in just about any game, really, but in most games, it takes a whole lot of stabbings. In Blue Planet, you probably just need the one).

Interestingly enough, once everyone has a basic understanding of the numbers, everything moves ridiculously fast. I've played games where a single fight could take an hour or more, and yet Blue Planet's surprisingly sophisticated system means that you can finish a running gun battle in less time than it takes to drink a beer (unless you drink like a sissy). It's also the deadliest system I've ever played, and this makes a game where you have to think a lot harder about what you would expect in a tense situation - resorting to violence as a first resort is likely to give you a good reason to make a new character really soon.

And you probably don't want to make a new character, once you've got one, because it's a lot of work. There are dozens of skills to pick through, backgrounds to choose, abilities to calculate, and that's before you ever decide where you were born or whether you still remember to call your mom on the weekends. You can make a quick-and-dirty D&D character in ten or fifteen minutes. It will take you an hour to make one for Blue Planet, and then you'll have almost no background, just a whole hell of a lot of numbers.

So you've got this incredibly detailed setting. You've got these imaginative but believable characters. You've got a system that does a pretty damned good job of simulating real life. What you probably don't have is any idea what to do with them, because while there is an overwhelming flood of information, there's no prewritten adventure to give you some idea what you should do. And it's downright daunting to come up with your own, because unlike most games that define character roles and potential hooks, in Blue Planet, you can do anything.

You could all be troubleshooters for a corporate mining initiative. You could be scientists aboard a research sub. You could be ecoterrorists fighting to stop the despoiling of your home. You could be politicians trying to bring civilization to the wild frontier. You could be cops fighting gangsters, or gangsters fighting cops. You could be bartenders working in a downtown tavern, and have all your adventures within two miles of your home, or you could be roving pirates whose hijinks take you all over the planet. There's so much you can do that it's nearly impossible to pick one direction, and that can leave a whole lot of work for the poor bastard who decides to run the game.

However, if your referee is up to the grunt work it will take to really have a grasp on Blue Planet, the game can be marvelously rewarding. There are no dungeon crawls in Blue Planet, and while there are plenty of opportunities for bloodshed, this is not a game for which you ever need miniatures. It's all story, and the gunfights are meant to further the game, not be the reason you all show up in the first place.

I would say it's a shame that Blue Planet is out of print, but happily, a company called Redbrick has the license for it. You can still get all the books from them, though I think you have to download them and print them at work while your boss is out for another two-hour lunch with his 'client' (who is actually the mistress he's banging on the side). They're not making any more books, so that kind of blows, but more than nearly any other RPG you could play, Blue Planet doesn't need much more than the core books. There's so much information that you'll be drowning in it before you ever need to expand. If you've got the appetite to digest a game this deep, you can send your fellow nerds all over one of the best sci-fi RPGs ever made.

Pros:
Exceptionally detailed and realistic setting
Fantastic and well-grounded, at the same time
Great system that makes the fight part of the story, not the story part of the fight
Immense variety - be whoever you want

Cons:
Considerably inaccessible without a lot of work

Out-of-print or not, you can still run right over to Noble Knight Games and pick up the hardcovers for this amazing game.
GO DEEP

Quick reminder - Enter the contest and grab yourself some decks for The Spoils:
http://drakesflames.blogspot.com/2011/05/ccg-review-spoils.html
Posted by Matt Drake at 3:07 PM

Your take on BP's combat system as pretty deadly leads to a question of comparisons for me.

Is it as "ill-advised" as, say, whipping out guns in a Call of Cthulhu encounter?... Or the unmitigated slaughterfest of an old Paranoia weapons-party?...

Gimme a little yardstick here, cuz I'm familiar with the above two.

Well, now you have me at a loss. I know those are two of the more classic RPGs, but I've never played either one.

Basically, ANY attack can kill a character. A punch is considerably less likely to do so - from an average man, the odds are about 1 in 1000. Maybe less. A bullet, on the other hand, is a lot scarier. Say you're an average guy, wearing average clothing, and you get shot. The odds of that bullet ending your existence are about 1 in 8. Body armor can help you survive, and hiding behind large things is not a bad idea when lead's flying, but even then, your opponent can just call a shot and trade a more difficult shot for one that hurts a lot more.

Ah. Okay. Sounds like a kinda-sorta in-betweeny gig then.

I mean, on the one hand, there's no blowing a sanity roll and going mind-gibberingly insane just by looking at a poly-tentacled opponent (CoC)...whilst on the other hand, you don't automatically start as part of a family of six identical clones of your character cuz you *will* lose two or three in the course of a night's outing (Paranoia).