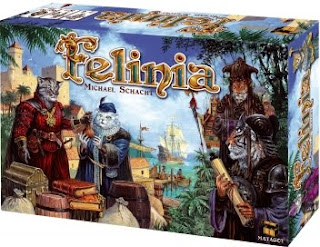 I do understand where the name came from, though, because the game is full of cat people. Felines, if you will. And the nation of Housecatia (I made that up) has just discovered the land of Felinia, and wants to set up trading posts. But the ruling bodies of Felinia (wild jungle cats like tigers and jaguars and stuff) have decreed that in order to cross the sea, they require specific trade goods. They want glassware and cloth and hard liquor, for instance, but each nation wants different stuff. None of the nations wants catnip or rubber mice, though, so the theme starts to fail a little.

The players will all start off every turn by running their businesses, deciding whether to spend their three turns buying merchandise like Justin Beiber t-shirts or champagne flutes, trading their Boone's Farm raspberry wine for Star Trek novels written by William Shatner, or just selling crap to run up their bank accounts so they can afford to do the other stuff.

If you wind up with the right conglomeration of trade goods, you can board ships for Felinia and set up trading posts. This is how you win the game, so it happens pretty frequently. Different trading posts offer different rewards, so you have to think about how you want to group your merchants to develop trading cities across the ocean, and if you want to try to get a monopoly on the panther trading circle.

It's kind of funny, actually, that the game has the cat theme, because it almost disguises how good it really is. You go into it expecting something related to felines, anything at all, and instead play an intriguing game of limited options, clever positioning, and outright backstabbing. There's a lot of the kinds of plays that make the other people at the table look at you and swear violently, which makes it fun in my book. There's also a lot of long-term planning, strategies formed from the first moments of the game, and split-second thinking that stymies the plans of your opponents. There is not, on the other hand, anything to do with cats. Which is great, because I'm not all that fond of cats, except with teriyaki sauce and steamed rice.

The various phases of every turn create a constant source of tension. In the first part of every turn, you'll place your bid tokens and tell the other players what you intend to do on your turn. There can be enormous competition for limited resources, and sometimes you'll take a crappy option for your first play just so you can trump an opponent on your second. Sometimes you'll even take a weak turn, to save your resources for a bigger move next time.

Then you set sail. You can only board a boat if you have the right trade goods, and that changes for every boat. If everyone wants to get on the green boat, there will be a race - but if you can make everyone think you want the green boat and then switch out for yellow at the last minute, you can force your opponents to cash-strap themselves while you ease right into your destination with no competition.

Even deciding where to settle is a contest, since it's in your best interest to build groups of merchants close to each other. Choose a spot inside your opponent's big cluster, and you'll disrupt his whole plan and break his monopoly. But you have to decide if that play is worth what it will cost you, because you may not be able to further develop that fly-in-the-ointment position, leaving you stranded and broke and trying to sell Elvis memorabilia to Asian tourists outside a 7-11 in San Dimas.

The pieces in this game bear discussion, because they are inexplicably neat. For no reason I can determine outside pure cool factor, there are four three-dimensional boats that you assemble from thick cardboard. That had to cost a mint, but they are more fun than flat tiles would have been. The little wooden cat merchants look like Puss in Boots from the Shrek movies, except, you know, cut out of wood. I honestly could not tell you why the score cards needed rounded corners, but it's pretty cool. And then, of course, there's a lot of art with cat-people on it. Also for no reason, as far as I can tell.

I will caution any blood-and-guts, red-blooded gamers out there who prefer games with a body count - nobody dies in Felinia. I guess they all have nine lives, so they don't bother trying to kill each other. This is a strictly Euro game, to the point that the rules are translated into French, German, and Dutch (at least, I think it's Dutch. I'm not exactly fluent). It's got bidding and worker placement, and no dice.

But for being a Euro game about foreign trade with a cat theme in a game with no cats, Felinia is a really fun game. I'll play anything, if it's fun, and I've already played Felinia three times. My family likes it, even without bloodshed. I seriously doubt I will be trading it away, which is also a good sign, because I try to get rid of just about anything I don't really want. My office is cluttered enough as it is.

So I can't decide if the name of the game sounds more like a body part, a disease or a sex act, and there are cat people all over the place and nothing in the game remotely related to cats. Felinia is extremely European, with virtually no random element. And for my money, it's really, really fun.

Cons:
Theme is questionable, not for being offensive, but because I can't see why it was required at all
Very European
Name sounds like a social disease. Or sex organ.

Noble Knight doesn't have Felinia yet. They probably will at some point.
Posted by Matt Drake at 4:06 PM

" Which is great, because I'm not all that fond of cats, except with teriyaki sauce and steamed rice."

And why my word verification is buctome (I misread butcome), the world may never know.