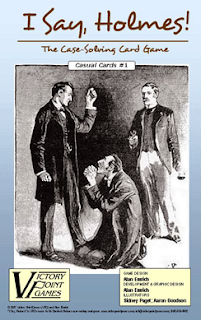 I just decided that this is Victory Point Games week. I'm saving the best for last, so for the mid-week review, I'm going to tell you why you should, under no circumstances I can imagine, play I Say, Holmes.

I like Sherlock Holmes. I like stories about Sherlock Holmes, and games, and even that total reinvention-slash-blasphemy that featured Iron Man as the title character. So I was pretty excited to play I Say, Holmes, because the VPG site said that it was a game about solving cases and stuff.

That was not true. I Say, Holmes, was not about solving cases. It was about getting rid of your cards. I didn't solve anything. I didn't even figure out why it was printed on miniature index cards that stuck together and were impossible to shuffle.

Here's how it works. Everyone gets six cards. One person plays a card, and the person after him has to play a card that works with that card. So if one guy plays a card that moves everyone out to the country, the next player has to play a location in the country. The bottom of every card lists the cards that can be played next, and if you can't play, you have to draw a card.

You can also make other players draw more cards or show you their cards or other nefarious stuff, and that should make this an interesting game. But there's one hell of a big problem - you probably don't have a choice.

That's right, you probably do not get to decide what card you play. The odds are very good that you only have one card you can play (assuming you have any), so you have to play it. It might help you, and it might send you back to London without a potty break, so you end up soaking your trousers on the way back to 221B.

There's a narrative in here somewhere, but it doesn't really make any sense, thematically. You all go out to the country, then you turn right around and come back, because nobody has a card that does something else. Then someone plays a clue card and someone else draws some cards and someone else is suspicious, but the overall point here is that you have almost no options, and no story developing at all. Those times that you do have options are few and far between, and don't really feel like you're doing anything. In fact, I commented after my second game that it felt like I had just played War, but it was mercifully shorter.

If the game had just been this weak, I could have forgiven it, to some extent. I mean, I do like to play a game where it feels like I'm doing something, and not just playing the only card I could play, but at least it would be a light and somewhat pointless game with art from old Sherlock Holmes books. But the guided-tour gameplay was just the tip of the iceberg.

For starters, the cards are tiny. And they don't have rounded corners. And they're printed on rough cardstock so that they feel like an arts-and-crafts project. I know VPG is all about the cheap components, but this was seriously difficult to play. Cards got stuck to other cards. People kept dropping their hands because it's actually kind of difficult to fan your cards when you have to hold them in three fingers. You couldn't draw properly, or shuffle properly, or anything else, and it was damned irritating. Seriously - if you're going to make a card game, how about some cards? I don't want to play a game printed on Post-It Notes.

And the graphic design on these munchkin cards is abysmal. It looks like the entire game was built in a free word processor by eighth-graders with an extra credit assignment. That could almost be forgivable, but consider this - Victory Point Games was started as a class project... at the Art Institute of California. An art school. A college, in fact, an institute of higher learning devoted to teaching people how to create good art. It's like advertising a culinary academy by sending out burnt cookies, or promoting a music college with CDs of Taylor Swift.

The poor design is compounded by the fact that I've seen other games from VPG, and while some are a little on the 'we saved money by using stock art' side, they look good. I Say, Holmes is simply embarrassing, and should not be in production. It sets a poor example, especially when the other games look so much better. If this were the first VPG game you ever played, you would be left with a sour taste in your mouth, and a huge desire to avoid ever playing another one.

Pros:
The illustrations were neat. Probably because they were made 100 years ago.

I wanted to show a picture of an embarrassed dad at the end of this review, but unfortunately, Billy Ray Cyrus doesn't have enough sense to be embarrassed.
Posted by Matt Drake at 6:36 PM

Matt, I'm glad you're reviewing VPG games. I enjoy several of their titles, but not Loot and Scoot or I Say, Homes.

Interested to read what your 'best for last' VPG review will be and I hope you receive more copies of their games to review.

Actually, yes, Ghostman, it's Uno. Probably should have seen the correlation, but I haven't played Uno in 30 years.

Matt, I recommend Zulus on the Ramparts, Astra Titanus, and the Dr. Stranglove-inspired Toe-to-Toe Nuk'lr Combat with the Rooskies.

To clarify my original post: I don't own Loot & Scoot or I say, Holmes. It sounds as if I don't enjoy those games.

I'm actually surprised that the game sounds this poor. Because VPG uses lower quality components, they are at the behest of gameplay and mechanics for a solid product. The fact that a game like this which, I have to agree, has plenty of thematic potential and could slip through the quality cracks is disheartening.

So far all of the VPG games that I have played, I have enjoyed, so I won't let one anomaly turn me away. Hopefully it is just that, an anomaly.

This isn't an original title of theirs. It is reprint of a Gibson Games title called Sherlock Holmes the Card Game. They didnt make any major changes to the game. From what I understand, the Gibson version is quite a find and well liked. I am surprised that you disliked the gameplay so much. I can understand the card quality issue.