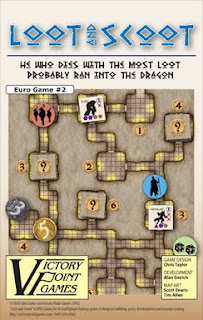 I talked to a guy one time who said that you can't judge a book by its cover. It didn't really make sense. I mean, if the cover says, 'Introductory Theoretical Physics,' it's a safe bet that the romance dialog is going to be a little forced. And if the picture on the front looks like it was drawn by special ed kids in a second-chance reform school, it's probably not destined to be a New York Times bestseller. I mean, I can judge a lot about a book by its cover. I'm pretty sure the guy who said that was drunk, though - he was sleeping under a bridge and pulling at a half-empty bottle of Wild Turkey. Clearly, he was wrong.

But that got me thinking - maybe you could extend that piece of faulty wisdom to other things. For instance, can you judge the quality of a game by the art on the box? Maybe you can, especially if the box is actually a big sandwich bag and the art is just pictures of cardboard chits fighting other cardboard chits.

Victory Point Games is hoping that you don't judge their games by their covers, which is particularly interesting because their games don't actually have covers. Their games come in plastic bags. The pieces of the games are all printed using what appears to be a crappy inkjet printer. And the dice they include in the plastic bags are so small that they could be a choking hazard, but only to very small cats.

When we opened Loot & Scoot and started playing, someone at the table remarked that it would make a passable prototype. They said it would be perfect for taking to a convention and asking someone else if they would publish your game. They were incredulous when I told them that they were playing the fully published version of the game. They were especially dismayed when we started punching out the cardboard squares and saw that they were all cut wrong, so that every piece had dangling paper hairs sticking off every direction. It really did look like a rookie production, and I confess that we immediately judged that book by its non-existent cover. We put it back away and played Nightfall again.

But after we finished Nightfall, we decided to give it a shot, and I'm glad we did, because Loot & Scoot is actually a pretty entertaining push-your-luck dungeon-style game. Each player controls a dungeon and a team of adventurers, and you take turns raiding your opponents, killing their minions and running off with their belongings. In the end, the most successful adventurers will manage to return home with barrels full of loot. The less impressive heroes will wind up as dragon food.

Every turn, you have several options for improving your adventuring team and making them more impressive. Because a good variety of heroes will allow you to more easily defeat monsters, you have to balance your desire to rush into dungeons and mad-cap kill everything against your need to create a balanced and capable batch of head-bashers. So you have to decide - do you want to upgrade your squire into a knight, or buy another priest? Invest in cheap hirelings whose main purpose is to die before their time, or sink the cash into a seasoned wizard?

And then you have more choices when you get to the dungeon. If you go for the cheap kills, you can rack up more bodies (and more loot), but if you decide to push your luck and go for the big bad monsters, you might make it out with the dragon's trove and be the richest bunch of home invaders in the kingdom.

All these choices combine with a considerable luck factor to make for a game with a very pleasant balance of dice and planning. It's not a tricky game, and nobody is going to sit around for three minutes trying to decide on a move, but it's got enough spine to be worth playing. Like I said, I'm glad we gave it a chance.

Not only am I glad we decided to try Loot & Scoot, but I'm glad I brought my own dice. I would have been stone blind in ten minutes using the dice that came with the game. They were apparently scaled down to be easily manipulated by mice who play craps in the wall of Vegas casinos.

In fact, what Loot & Scoot really needs is a massive overhaul. The dungeon boards should be bigger, and printed on heavy card so they don't curl at the ends. The monsters should be cards or at least much bigger counters, and they should have art. Miniatures, or at least cut-out standups, should be a requirement to play the game. The components in Loot & Scoot actually make it less fun to play, and that seems like one hell of an oversight.

I did enjoy Loot & Scoot, and I think it's a clever and entertaining game. However, I'm probably not going to play it again, because I don't have the time to properly decorate it. I need a big sheet of foamcore board, some nice art, and maybe a blank deck of cards. To let you know how much I prefer an attractive game, I paint all my Warhammer Quest miniatures because I think the game is more fun when the figures look cool. That's way more trouble than is required to enjoy the game, but for me, aesthetics matter.

Because screw that homeless wino - I do judge a book by the cover.

Pros:
Light and entertaining
A nice balance of luck and strategy
Easy to learn and quick to play

If you're not as hung up on quality production as I am, you can get Loot & Scoot from Victory Point Games:
http://victorypointgames.com/details.php?prodId=120
Posted by Matt Drake at 2:50 PM

Can't stop laughing about the size of the dice. Still, I would definitely like to try the game !

Excellent review ! Thanks to you !

Can you take a poll as to how many of your readers needed to google "incredulous" I suspect a good majority did.

Yea, those Victory Point dice do make for a novelty - sort of like the old 'your message written on rice' concept.:P I file the VP dice away for future use with 'superslim' builds of games like Chaos Isle, that need some dice, but ship in tuckboxes without space for 'em. :)

I've been sorta toe-poking Loot & Scoot since Barnes' review some months ago. I've already got Forlorn Hope & Nemo's War, so I'm pretty much OK with the less expensive - OK cheap! - components, as long as the game play holds up. Your review sounds like the gameplay works pretty well, and the games'r cheap. Sounds like something I may throw in along with their next 'primary-buy' game I pick up.

As you mentioned, VP games are certainly good for the pimpin'-out-yer-game crowd: Decent game concepts don't come in much simpler packaging. Well, once you get out of the Print-n-Play niche. :D

At this point I'm also watching for material on their Day of the Zeds & Legions of Darkness games.

Toys, it is a fun game. We enjoyed it. And looking at it, I will be playing it again, because I also have the expansion. It'll be fun. It just won't be as fun as if it had good pieces.

Cheap components? Well, yes. But also a very cheap price tag. Cheap but good games is what VPG is all about.

As to those dice- originally VPG shipped game with no dice at all, but then they found those super-small ones and started to ship game with them as a sort of bonus. You will note that in most of the VPG rules they still say you need to suppy your own dice. Just thought you might want to know that little bit of info. on little bitty dice.