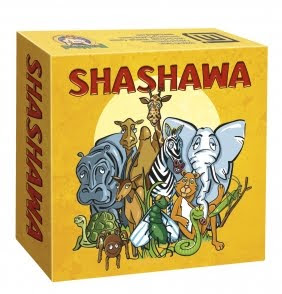 Sometimes, to make me feel a little less guilty for doing something I love and getting free games for it, I try to tell myself that I am providing a service. I promote games for companies, hopefully pushing sales, and I tell buyers which games they might like. I'm like a GI Joe public service announcement.

But sometimes I just plain feel bad. When I review a game like Shashawa, I think readers will find themselves wondering why on Earth I felt the game needed a review at all. It's cheaper than used dirt, so it's not as though you're going to be thinking long and hard before pulling the trigger on a game that barely costs ten bucks. When you're adding games to your basket to push the order into free shipping, it's not likely that you're being particularly discriminating, anyway.

And the actual game in Shashawa is unimpressive, too. You pass cards to make matches, and when someone makes a match, they call out and everyone grabs a water token. Except that there are fewer water tokens than players, so someone gets a bad case of dry mouth. Three misses means you're out. And now you know how to play. You could seriously play this game with a regular deck of cards and just about any kind of tokens. I suggest you use spoons. I hear those are popular.

Now, it's not entirely fair to just bash the hell out of Shashawa. It's not like it's boring. It can be fun. You get that palpable air of tension that comes when you play a game requiring you to have split-second reflexes, and there will probably be a lot of laughing. A game that inspires a whole lot of laughing can't be all bad, even if you could get the exact same result watching old Adam Sandler movies.

Come to think of it, you might as well go ahead and buy Shashawa. If you play it twice, you'll more than get your money out of it. You'll laugh, you'll have fun, and you can play with the in-laws when they visit for Christmas. It's not my first choice for games, but if I'm having company and they want to play a game, I can break it out without having to reveal how long I spend painting miniatures for Warhammer Quest, or trying to explain the rules for Conquest of the Empire.

I guess I don't have to feel too guilty for writing a review of Shashawa. For one thing, the publisher really wanted me to write about it, so at least I'm fulfilling that obligation. And if you're looking for a wide-access family game for the holidays, you could do a lot worse. You won't be adding it to your wishlist, and you'll probably end up throwing it into a trade deal down the line to add another five bucks in trade value, but at least you'll have it handy when you need it. Considering how close we are to the time of year when we have to choose between whiskey and firearms to make it through a visit from your mother-in-law, you might need it sooner than you think.

Pros:
Super easy rules
Light and fun
The kind of tension you get when you have to react fast
Perfect for family get-togethers

Cons:
More shallow than the puddle you get when you spill a beer on a concrete floor
You could easily replace it with a deck of playing cards and a raid on the silverware drawer

Noble Knight Games is carrying Shashawa, which means you'll know just what to add to your order to get it to nice round number:
LONG LINK
Posted by Matt Drake at 6:04 PM

My parents used to play this game when they visited my uncle. The game was called Spoons. They would shout and holler, while my brother and I played with our cousins and get fussed at if WE made too much noise.