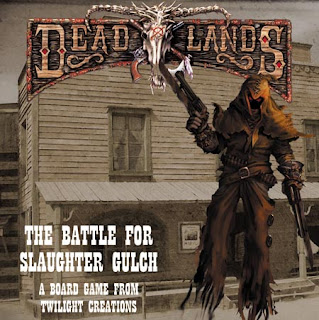 I love Deadlands. The setting, specifically, is amazing. You've got the Wild West, which is awesome on its own, but then to really mix it up, there's this supernatural, mad science, pulp monster, impending doom horror thing working. It is, in my opinion, one of the best settings for a game ever created.

I figured I would enjoy a board game based in the Deadlands Weird West. I mean, the card game was excellent, why wouldn't the board game be just as fantastic? But thanks to Twilight Creations, I have the answer to that little brain puzzler. It would not be fantastic if they made an ugly game that was not very fun to play. Which they did.

The disappointment starts early. The game has up to six different factions competing to claim the ghost rock in Slaughter Gulch. The Texas Rangers and the Agency, the mad scientists and the hucksters, even the shamans and the blessed men of the cloth are in on the action. You all descend on this little town and try to recruit the townspeople and control the various buildings.

If that premise sounds like a bad case of deja vu, it's because it was already done to death in Doomtown, the Deadlands CCG. With the entire nation of the United States and monsters of every stripe available, why rehash the same thing we already did once? We could have been monster hunters killing the walking dead, or salt miners evading Mojave rattlers, or Maze pirates swiping cargo. We could have had so many different games, but every time they make a Deadlands game, it's about taking over a town. Even that rather silly discwars-style game they came out with was about controlling a town. That well is dry.

But let's assume you could get past a game premise this dull, ignoring the vast potential for games that actually would have been entertaining, and pretend you just want to talk about how the game plays. It's fairly straight-forward - you have up to six guys, and you have a little mat hidden behind a screen, and you put tokens on the mat that indicate where your guys will go and what they will do.

Here's a second massive failing. Your actions are limited by the tokens you have. So if you're the hucksters, you can only send one guy to fight, even if five guys all go to the same place. Only one guy a turn can run. You can only prospect once a turn. And when you actually build up your whole team and have all six of your goons in town, they won't have anything to do, because you'll send one guy to rob the train and the rest of your team will stand around with their thumbs up their asses, wondering how they're supposed to recruit someone when they've been sent to an empty graveyard.

It gets worse. The rules are about as clear as a puddle of warm mud on many points, and overly complicated in others. We played twice before we figured out when we were supposed to reveal the townspeople cards. For some reason, your handicapped gunfighters can't move from one building to the one next door with a day to travel, possibly because their wheelchairs are powered by bright colors and the only color present in Slaughter Gulch is dirt brown.

That brings me to another problem - this is one ass-ugly game. The art isn't bad, exactly, but I am forced to wonder if it was created by a color-blind artist. Everything is brown. The backs of the cards and the fronts of the cards, the street, the buildings - everything in the game is some shade of turd. And it's not like they saved a bunch of money, either, because there are spots of color here and there, meaning that they had to pay to print full color, despite having a game less colorful than dirty athletic socks.

Slaughter Gulch comes with a bunch of miniatures. These are very small guys, but they are miniatures. Six for each faction, plus twenty townspeople, means you've got a lot of plastic in here. And you know what? They don't stand up. That would be a minor irritation, except that when your minions get shot, you put them on their backs, and since these sons of bitches won't stay on their feet anyway, you're never sure which guys are actually wounded and which are just looking for a lost contact lens.

But the most grievous error, the one unforgivable mistake made by the creators of Battle for Slaughter Gulch, is that it just doesn't feel like Deadlands. Sure, you can learn spells if you're playing the hucksters, but for the most part you travel from building to building (very slowly) and try to get the townspeople to work for you. You don't banish ancient evils, battle demons in the swamps of Louisiana, or face down El Diablo so you can skin him and make a nice jacket. It has all the thrill and fast-paced action of a local campaign to be elected to city council. It could scarcely be less exciting. Sure, there's a hanging judge on one card, and a walking dead on another, but they don't do anything. In fact, you can get them both to join your team - and then they just turn into normal goons. One of the most powerful terrors of the Weird West just hangs up his magical shooting irons and decides to invent gyrocopters.

I tried to like this game, and my wife actually said she thought it was OK. But I have boxes of Deadlands books and Doomtown cards, plus an entire tool chest full of Range Wars, and I am absolutely despondent over the wasted potential. If Twilight Creations had made a cooperative, Arkham Horror-style game, it would have been a blast. If they had made a Railways of the World-style game where the railroads compete to reach the Great Maze, it would have had tons of promise. But they made an ugly game with sorry-ass miniatures, rehashed a dying premise, and sucked all the excitement and thrill out of one of the best fake worlds ever created.

Slaughter Gulch did do one thing, though - it made me want to play Deadlands again. My son will be happy. He's been pestering me to Marshal a game since last spring.

Pros:
Based on Deadlands

If you just feel an overwhelming need to have someone piss all over your fondest gaming memories, go to a Baptist church and tell them you play D&D. The Battle for Slaughter Gulch is too boring.
Posted by Matt Drake at 2:30 PM