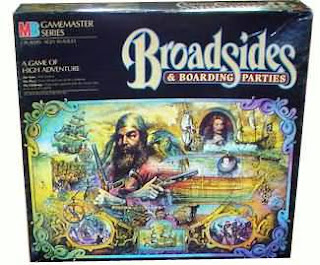 There are gamers for whom a game is only a good game if it's a mental exercise. If they're not stretching their Mensa muscles and proving their intellectual superiority, these gamers cannot have fun (if you ask me, they're probably not that good at having fun, period). For those gamers, I recommend more fiber.

For those gamers who, like me, regularly use games as an excuse to play with toys, Hasbro made Broadsides & Boarding Parties. This is a game that is basically a box full of toys with a few rules to make it seem legitimate. It's like playing with toy soldiers when you and your little brother come up with rules that incorporate Lincoln Log buildings and shooter marbles.

The main feature of this humongous toy pretending to be a game is the pair of plastic ships. You get two sailing ships, one to be a pirate and one to be the Spanish galleon, and these puppies are honking big. If you weren't too particular, you could wear them as shoes. Plus you get a mess of plastic sailors and pirates, cannons that actually poke out through little holes in the sides of the ship, and a beautiful game board depicting a completely fictional section of the Caribbean. You have little plastic ship models that you'll maneuver around the fake sea, and cards that you use to plan your moves and try to fake out your opponent.

Broadsides & Boarding Parties is composed of two different phases, predictably broken into the broadsides part and the boarding parties part. It's not particularly difficult. You sail your ships around, firing cannons at each other, and then your ships bang into each other and you send your pirates over the rails to capture the enemy captain. The broadsides part of the game is played out on the map, but when your ships finally tangle and it comes down to swashbuckling swordplay, you push the ships next to each other and actually have your plastic pirates climbing around on the decks of these gigantic ships.

This game is undeniably fun, unless you're one of those fun-sucking sandbags who insists that every game be intellectually difficult. You're going to sail in circles and shoot at each other, then as masts come crashing down and water starts flooding into the cargo hold, you set grapples and swing over to the enemy vessel, cutlass between your teeth and blood on your mind. If you can't have fun doing that, then your imagination must have packed up and moved to Alaska, where it is now dating Sarah Palin's daughter and trying to get her knocked up again.

Two key skills are required to do well during the broadsides part of the game - luck and clairvoyance. If you can sucker your opponent into zigging when he should have zagged, you can shoot him when he can't shoot back. Make a poor calculation, however, and you could find yourself floating around like a waterlogged rubber ducky. Fortunately, even if you play poorly, you can still do pretty well here, just by being lucky. There's an absolutely amazing amount of die-rolling here, and you might just blast the crap out of your enemy with two dice while he splashes all around you with five. Brilliant maneuvering will get you a statistical advantage, but luck can win the day.

To win the boarding parties portion of the game, you only need luck. There's virtually no cleverness required. You move, you roll dice, the low roller loses sailors. This part is a blast, because you can practically see Errol Flynn swinging over on the rigging and doing all kinds of violence. Unfortunately, Errol has about as much chance of taking a cutlass to the kidney as he does of surviving the fight, so it's a little arbitrary. Sure is fun, though!

One thing I should mention - this game is pretty damned old. Not like Monopoly old, but it's no spring chicken. It's one of those games Hasbro put out in the mid 80s, alongside Shogun and Fortress: America and Axis & Allies. That means I was in high school when it was first printed, and now my kids are in high school, so this is an old game. It's frightfully expensive, assuming you can find a copy at all. And considering it's basically a bunch of toy pirates with some incredibly basic rules, you may not be able to justify the cost, especially if you can only enjoy games if they come with a minimum of 27 wooden cubes in at least four different colors.

There are never going to be tournament games of Broadsides & Boarding Parties, and there will never be national player rankings. It's not a deep or smart game, and it's not supposed to be. What it is supposed to do, it does brilliantly. It doesn't pretend to be a brainy game. It stands tall and says, 'I'm a toy, dammit!' and it makes it work. Buzz-killing abstracts be damned - real men play games where people die.

Huge, awesome ships
Plastic pirates and cannons
Stunning board and simple rules
A goofy amount of fun, especially for grown men who play with toys
A decent amount of bluffing and maneuvering in the beginning of the game

Cons:
Woefully rare and painfully expensive
Almost completely luck in the last part of the game

I didn't expect to find a copy of this game anywhere, unless they were overpriced at eBay, but my newest sponsor, Noble Knight Games, has one right here:
LINKAGE
Posted by Matt Drake at 7:26 PM