Board Game Review - Guardians of Graxia 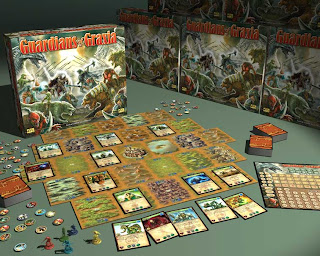 If you want evidence that board games are not like video games, you just have to look at Guardians of Graxia. Or, you know, pretty much any other video game, except that in this case, there's a video game and a board game version of the same game. So comparing Grand Theft Auto and Agricola is probably not as good an indicator, though it does make it pretty easy to tell which is not a board game.

The video game of Guardians of Graxia is pretty damned cool. You summon your guys using cards, which you pay for with mana, which you get from controlling land. It's a tactical wargame with a fantasy theme, and it's fun. There are more 3D animations than are strictly needed, and that makes it slower than tectonic plate movement on my computer, but it's a fun game, anyway. You can download it and install it from Gamers Gate, where it will set you back a mere ten dollars.

The board game version is pretty much exactly the same game, but instead of having a computer handle all the math, now you have to do it yourself. It's still fun, as long as you have the patience to do all the adding that the computer was doing for you. Which, unfortunately, means that it's a pain in the ass.

It's still fun, though. You use cardboard tiles to build this big board, with the tiles offset to make a sort of fake hex grid. The tiles have plains and villages and cities and swamps and maybe a little piece of New Orleans that broke off after Katrina. Then you summon your cards onto these tiles and move them the way you would if you were playing a miniatures game, only the cards are the miniatures, and they all have these different abilities that tell you how they fight. Between orcs and dragons, knights and elves, and lots of other refugees from a D&D world, you've got a pretty standard fantasy world, and lots of choices.

But unfortunately, all these guys have to be different, and that means they all have wildly different attack, defense, magic, life, and other stuff you'll have to track as you play. There's an entire board separate from everything else that you use to track all the adding and subtracting, the way you would use an abacus, only not quite as pretty (unless it's an ugly abacus). Here's an example, to let you see how much adding you'll do:

Let's say you start your turn with 35 mana. Then you summon a band of wolf riders, which costs, say, 8 mana, so you move your mana marker down. Then you cast a spell that lets you move that guy, and it costs 7, so you slide your mana counter down again. Then some orc guys move, and they attack, and then you do a bunch of adding and subtracting and playing cards that add and subtract and cost mana and add battle value and reduce the other guy's mana value and maybe add some mana for you and then you play some other cards that add battle value or subtract battle value, only these don't cost mana, but they do make you slide your battle value counter all over, and then you look at the scores and go, 'screw this, let's play Parcheesi.'

As you can see from this example, there's a bit of math. It's not hard, but holy macaroni is there a lot of it. Add 3, then add 2, then subtract 1 and add 3 and a whole lore more, and when you're done, that will be your shoe size minus your age.

If the math doesn't scare you off Guardians of Graxia, it's a pretty damned fun game. It's definitely better than the Panzer General games, because it's not as complicated (which is saying something about the Panzer General games) and it's easier to maneuver on the hex grid. You can even play it solo, if you don't mind keeping track of all that math for both sides. It's got some very nice illustrations, though the graphic designers seem to have been the lowest bidders, and it even has six plastic miniatures that you absolutely never need to use for any reason whatsoever.

On the other hand, if the complicated parts of the game annoy you, and your computer was created in the last two or three years, you might be a lot better off with the PC version. It's fun, it's just as pretty, and the best part is that the computer does the annoying math for you.

So now that I've finished that, let me get a little preachy.

Look, video games are not board games. Board games have to be simpler, because we're not all walking calculators. There are board games that provide just as much tactical depth as the Petroglyph games, but do it with more abstraction and less calculation. I'm fine with a little bonus or penalty here and there, but a good board game designer could have taken Guardians of Graxia (and the Panzer General games at the same time) and created something fun and fast and smart and deep. It doesn't need to be Reiner Knizia simple, but it would be great if these games felt more clean. As it stands, the video games are a blast, because Petroglyph is a video game company, but the board games are sloppy, because Petroglyph is a video game company.

Guardians of Graxia is an entertaining, tactically smart game, no matter the format. The board game certainly makes more sense if you can wade through the math and want to talk about beer selections with your opponent while you play, but if you're really just here for the game, get the PC version and let your computer do the work for you.

Of course, if your computer is as old as mine, it might actually be faster to just play the board game. I'm still waiting to see if I killed the dragon, and I started last Tuesday.

Cons:
Math - not hard, but lots of it
Defensive strategies are doomed to failure
A few poor design choices make the game unnecessarily more difficult to play

If you're the kind of person who likes games that make you think, and where playing well means you win more often, Guardians of Graxia might be for you. Noble Knight Games has it:
LUDICROUSLY LONG LINK
Posted by Matt Drake at 2:42 PM