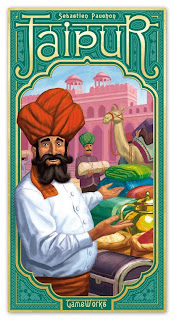 I like a game with a lot of theme, and I don't pretend to apologize for that. But sometimes a game can be fun, even if the theme is totally weak sauce. Example: Jaipur.

Jaipur is one of those games made by European people who think that mundane crap like sorting mail and stacking boxes is exciting enough to make into a game. In this two-player game, you're each merchants in Jaipur (which explains the name). You're competing to make the most money by buying and selling stuff like silver, leather and very nice scarves. To emphasize to the casual passerby how boring the theme for Jaipur is, the box cover has a strange-looking Indian dude who appears to be really enjoying the opportunity to go shopping. He may be gay, but it's hard to tell through his ludicrously bushy beard.

What you have is two players, each with a hand of cards, and a row of five cards between you. Most of the cards are trade goods like gold and jewels, but a bunch of the cards are camels. You don't actually sell the camels, but they are wicked important to making the game work, because of the way you grab sellables.

Like many European games, the rules for Jaipur are really simple. On your turn, you either grab cards or sell cards. That's it. If you buy just one, you replace it from the deck, and if you want more, you have to swap them from your hand. You can also grab every camel in the market, which fills it back up again, but gives you a heck of a chance to trade stuff later. The idea is that you use these camels to swap out for goods, thereby loading up on the cards you need to make the big sales.

If you sell cards, you take whatever you have in a single color and discard it, then take some points. The first person to sell a particular good gets more for it, and sometimes you'll run out, leaving your opponent with worthless crap that nobody wants to buy because the market is flooded. After a while, the round ends and you add up points. To win the whole game, you have to win two rounds. It's pretty straight-forward.

What is not straight-forward is the strategy and timing required to be good at Jaipur. Grab a bunch of camels, and you might offer a market full of expensive stuff to your opponent. But if you do it right before the round ends, you can score extra points for having the most camels (not sure how that makes you a great trader, but it won me the game, so I'll overlook it). Hold on to those jewel cards, and you can steal the whole stack, but hold them too long and the other player will snatch the best ones off the top and leave you with a handful of garbage. Ignore the cheap stuff, and you let your opponent collect the five-card trade bonus. Pay too much attention to the cheap stuff, and your opponent gets all the good stuff.

It will take you a round or two to figure out how to play Jaipur well, but you'll enjoy learning. For one thing, the art is so nice it's practically decadent, and the cards are that swanky linen stock that make them a breeze to shuffle and deal. There's even the coolest insert I've ever seen in a game - it has this sculpted mosque and the name of the game embossed in the bottom of the tray. You gotta see it to know what I mean, but it's really sweet. Some people might argue that components don't make a game, that you can enjoy a game just as much if it has flimsy pieces and ugly art, but I challenge them to go to a bar and choose between a smokin' hot dame in a miniskirt and a ferociously ugly girl with an ass like a phone book. Either way, you're having sex, but it's way more fun if the chick looks good.

I still say the theme is nearly as gay as collecting tea, and that no self-respecting, red-blooded, American meat-eater should enjoy the game. But on the other hand, it is a really fun game, and the theme is just not that big a deal. Hell, I love Blue Moon, and the theme for that one is sheer drug-induced randomness, so just about any game can be great if the rules work. And in Jaipur, the rules work. The game is fun, challenging and smart, which means I'll probably be playing it a whole lot more.

Cons:
What a thoroughly boring theme
Posted by Matt Drake at 6:19 PM

Great review, Matt. Sounds like a good couples game along the lines of Lost Cities.

I greatly enjoyed trashing my opponent 'Camel boy' although he whipped my ass.

And having talked to the designer, he'll be mightily pleased that you liked the artwork. He thinks it's important.

Great stuff, Looks like a game worth having to me.

The only thing that would've made this game better is if there was one of those "singing Hallmark card" mechanisms in the box that says, "Thank You, Come Again!" when you close the lid.

Pete, that definitely would have improved the game, though I fear it might have been cost prohibitive.

Fun read. We love this game so much, I'm afraid it might have replaced Lost Cities. And you're right, it's just gorgeous.

To fully enjoy playing the game however, before laying down a wicked combination and picking up that bonus token, yell out a healthy "JAI-PUR!" - which is said in the same style as "Jai-Ho" from Slumdog Millionaire. Very satisfying.

I got this game yesterday and I agree with mostly everything you say, though I have to admit I actually like the theme! (sorry- and I'm not Gay!)

It's so easy to play that my 9 yr old picked it up in a flash and kicked my butt the first game or two. For such a simple concept it has great depth and strategic possibilities (with the camel mechanic taking centre stage).

The combination of ease of play and strategic depth combined with the fine artwork and components is what makes this game great.