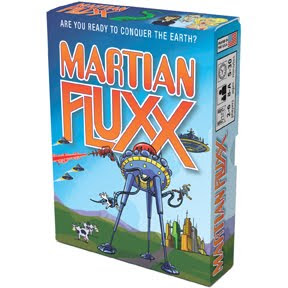 I've had a tough week. I'm tired, and I feel like reviewing something easy. So I'm reviewing Martian Fluxx, because 1) it's fun, so I don't have to expend energy coming up with clever ways to call it names, and 2) it's funny, and I'm hoping to save some effort on coming up with jokes by laughing at the ones that are already in the game.

Now, before you all just say, 'hey, Matt likes it! I'll get two!', let me start off by saying that I like Fluxx, the original Looney Labs game where dumb crap happens all over the place and you try to collect cookies and spaceships. It's fun, pointless, and silly. The keepers and creepers don't tend to do very much, but they're kind of interesting anyway, even if they are thoroughly nonsensical. But what Fluxx really needs to kick ass is a theme, one that goes past getting love and peace and makes more sense than a lobotomized lab monkey who still thinks he knows sign language.

And that's Martian Fluxx. No, not the loopy monkey - that's old Fluxx. Martian Fluxx is Fluxx, but with theme, and not only that, it's a fun theme that you can really get behind. Everyone plays Martians hell-bent on conquering Earth, and so you bring in your ray guns and your flying saucers, tripods and abduction chambers, and start scooping up humans to be turned into food.

The keepers in Martian Fluxx are stuff you can use to help you invade. You get stuff like tripods and ray guns and space modulators. You also have other stuff, like Earth and Mars and canals on the Red Planet. You'll put down your keepers to try to make sure you have what you need to succeed on whatever goal happens to be current.

Then you've got creepers - and these are all those damned Earthlings. Mostly there are pathetic humans, and if they're still alive, you can't win. Then there's the leader human, and he's only kind of bad, because he keeps the other humans from blocking your path to world domination, unless he's your only human, because then he doesn't have anyone to throw under the bus and has to man up and fight.

The part where Martian Fluxx gets pretty funny is when you start looking at the goals. These change all the time (which you knew because you were familiar with Fluxx), and some are really clever. Like Mars Needs Women - if that's the goal, then you need some female humans and the planet Mars to win. If the goal is Humans Without Hats, then you need humans who are not wearing hats, and nobody can be using the tinfoil hat (also, you can dance, if you want to, but you'll leave your friends behind). And if the goal is Two All-Beef Earthlings, then you want to be holding - you guessed it - two cows.

Another reason that Martian Fluxx is better than regular ol' Fluxx is that you can use a little strategy that can carry over from turn to turn. Since so many of the keepers have special abilities, and lots of the actions let you work the cards to your advantage, you might actually be able to hold onto some cards and plan a few moves ahead. It's not about to turn into chess, but Martian Fluxx reduces a lot of the random element that makes Fluxx feel like you're running around a barnyard with your pants on your head and your shoes on fire.

But the best new addition in Martian Fluxx is not even a regular play card. It's the new meta rule - the time limit. Just drop that sucker on the table, decide when you want to finish, and now you won't be stuck playing Fluxx until your families send out search parties. That's a huge relief for those of us who don't have three hours to play a crazy card game.

Actually, that's not really the best addition. The best addition is the great theme. Where Fluxx felt random and pointless and meandering (even if it was fun), Martian Fluxx takes all the fun parts of Fluxx and cuts out the irritating parts. The art is perfectly campy, the rules are the same ones you already know, and more of the cards actually do stuff. It's fun and funny and engaging. If you can laugh about Martians abducting cows so that they can train them to be Martian emperors, and if you like any of the other versions of Fluxx, then Martian Fluxx should be right up your alley.

Cons:
Still Fluxx, so if you hate Fluxx, you'll hate this

Martian Fluxx is coming, but it's not here yet. Once it's available, you can pick up a copy at Looney Labs:
http://store.looneylabs.com/
Posted by Matt Drake at 8:47 PM

Thanx for the valuable information. This was just the thing I was looking for, the game seems woth playing.... flux was good1... this got to b too.... keep posting. Will be visiting back soon.

I had already pretty much decided that Martian Fluxx was the Fluxx game that appealed to me most, but your review cinched it. Very apt description of original Fluxx: "running around a barnyard with your pants on your head and your shoes on fire"!