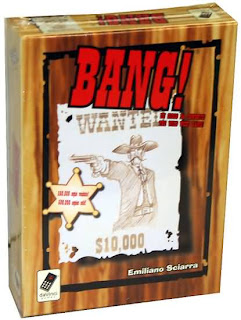 Monday I reviewed Attack!, and complained for the whole thing about games with titles that end in unnecessary punctuation. Tonight I'm reviewing Bang!, and since I already spent too much time dwelling on my irritation with exclamation marks, I'm going to gloss right over it.

Instead I'm going to express my disapproval of games whose rules don't make any sense at all.

And then Indians ride through the town, and everyone stops shooting at each other for a second to shoot Indians. I guess it's like a carnival game - you shoot the targets, and if the pink bunny pops up, you take a shot at him real quick so you can win the giant foam snake.

That's only one silly rule. We'll get to more.

Every player in Bang! gets a role card to start off. Only one of you can be the sheriff, but there will always be some outlaws, and you'll have that sneaky renegade, and if you have enough players, you'll even have a deputy or two. Only the sheriff reveals his card, though - everyone else has to be sneaky and try not to let the others guess who they are, to keep from becoming a target. It's like Werewolf, only everyone is a wolf.

It's even more like Werewolf because the idiot sheriff can kill his deputies, because he doesn't know who they are. I completely understand why the game needs to keep identities secret, but seriously? Is the sheriff blind? Retarded? Did he not recruit this hired help? And how about the deputy? After one bullet bounces off your face, don't you kind of want to go, 'Hey, hotshot! You're with me, remember?!'

OK, so the identity thing is a little goofy, but the idea is great - you have to trick people into shooting the wrong people so that you can win. It's a great bluffing feature, and the card play makes it even better. To shoot someone, you need Bang! cards, but they can totally dive under the porch and avoid harm if they can play a Missed! card (don't ask me why all these cards have excess punctuation. For that matter, don't ask me why all the titles are actually in Spanish, and you don't see 'Missed!' unless you read the fine print).

To complicate matters, you can only shoot people you can see - and to start off, you can only see people to your right and left. So in a big game, you can't even shoot the people across the table (apparently you start the game with a slingshot and a couple of smooth rocks). And if the guy right next to you jumps on a horse, he is suddenly completely invisible, though he can still see you. Because that's what gunfighters in the Old West did - they jumped on horses so they could disappear.

You'll need weapons if you want to shoot farther than next door. Different weapons offer different ranges - except the Volcanic revolver, which still only shoots next to you, but it lets you shoot a whole lot of times in one turn, instead of just once during your turn, like if you have normal guns. This only makes sense - the Volcanic was the only weapon in all of the Wild, Wild West that could fire twice in a row. Every other weapon required you to let everyone else shoot at you before you could shoot again. As I recall from Totally Fictional History 101, there was a kind of Miss Manners thing where it was just plain rude to fire without giving everyone else in the fight a chance to shoot you back, but the Volcanic got you a pass.

There are lots more cards that do lots more stuff, like beer that makes you healthy (I wish they bottled that locally), barrels you can hide behind (unless Indians come running through the middle of your gunfight), and a jail where you can just lock people up in the middle of a shootout. It's handy, too, because you can toss another player in jail, and then everyone can ride past and shoot at him, and he can't even hide under the bed. And he certainly can't shoot back.

To add to the mayhem, everyone gets to play special characters, and each character gives you a cool ability. Like Calamity Janet, who gets to use Missed! cards like Bang! cards, or Bart Cassidy, who draws a card every time he takes a bullet. Some of these abilities are a lot more powerful than others - Slab the Killer is approximately 37.8% more deadly than everyone else, but the unfortunately named Jourdonnais is only slightly better at avoiding damage than he is at convincing people his name has nothing to do with sandwich spread.

So I've got a lot of problems with some of the absolutely silly rules in Bang!, but the fact is, it's a really fun game. It doesn't even try to be balanced - the outlaws are incredibly likely to win, and the sheriff is almost guaranteed to get his ass shot off - but that's not the point. The point is fooling your friends into shooting someone else, and the guy who does that the best is very likely to at least hold out for a while. It's a total hoot to try and guess which players are your enemies, and which are your allies, even if it's completely nonsensical that the outlaws wouldn't recognize each other from campire night back at the hideout.

There are some problems with the game play, though. For starters, you could get eliminated before you ever have a chance to play a card (not likely, but possible) and then the game could go another 30 minutes while you catch up on your stories. Some abilities are far more powerful than others, and sometimes it seems like your opponents are drawing magic hands while you keep trying to pull the one card you need to break out of prison.

But problems and all, Bang! is a lot of fun. There's a lot of bluffing, a little bit of clever card play, and some thoroughly nonsensical gunfighting. And as I like to say, real men play games where people die - and this is one of those games. It's a lot of fun, even if you can stop a fight so that everyone can make a quick run to the general store.

Pros:
Great bluffing combined with smart card play
Ludicrously easy to learn
One of the few games that actually plays really well with a lot of people

Cons:
Doesn't even try to be balanced
Early elimination totally sucks
So much luck that a whole team of chess players threw themselves off a cliff after just one game
Routinely nonsensical silliness abounds

This is a review of my old version of Bang!, but there's a new one out that comes in a giant plastic marital aid... I mean bullet. You can get it here (sorry, it's not Dogstar Games):
(Really long link)
Posted by Matt Drake at 9:52 PM

Matt, you're a great game reviewer and a fine writer, but I think you must have gotten a D- in Foreign Language Recognition class. The cards are in Italian, not Spanish. :-)

Cody and I have found that this game plays best when all the players use their best Italian accents, a la Bill Hader's Vinny Vedecci.

I actually outright failed Foreign Language Recognition. It was my weakest subject at Fake U.

Italian spaghetti westerns are the root of it all!

One thing that can make BANG! quite a bit better if you dislike player elimination is to add in Death Mesa. Death Mesa creates a solution to this problem by having eliminated players remain in the game as ghosts, which are able to impact the game's outcome, help their team mates, and even succeed in their roles. Ghosts have no life points, no distance constraints, cannot die, and also draw from a specialized deck of cards called the Dead Men's Deck. Cards from this deck allow the ghosts to possess the living, bequeath items from their will, inspire or weaken others, reveal information on cards in player's hands, warn of impending doom, and so forth. Ghosts however, can spoil each other's plans. With a strong thematic background, Death Mesa should add to the fun of BANG! and draw new fans to it who could not stand the player elimination.

Check Death Mesa out at:

Wow, nice post,there are many person searching about that now they will find enough resources by your post.Thank you for sharing to us.Please one more post about that..