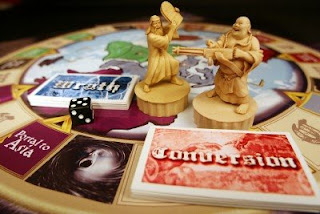 Let's assume you just read the title of this game and weren't offended right off the bat. Maybe you said, 'you know, I'm not really sure what that's about, maybe it won't be as bad as it sounds.' If that's what you said, I hate to tell you this, but you're about to be disappointed.

Playing Gods isn't just accidentally or mildly offensive. Each player takes on the role of a deity trying to obliterate all the others gods by recruiting or decimating their followers. Buddha carries a chain gun. Allah carries a bomb. And the most offensive of all of these gods is Jesus, who is swinging a giant cross with a spike in the crossbar. In fact, I think it's just a contest at this point to see who blows up Balls Out Entertainment first - crazed Muslims or rabid Christians. My money is on the Muslims. They were going to bomb that Danish newspaper just for a bunch of cartoons. An actual statue of Allah carrying a bomb has got to put them over the top.

[AFTER THE FACT EDIT: The creator of Playing Gods pointed out to me that he never actually mentions that the guy with the bomb is Allah or Mohammed. So if you're a foaming-at-the-mouth Islamic terrorist, you can put away the vest full of C4 - the guy is not making images of your favorite deity. But if you were considering it, feel free to put the vest back on and pull the trigger anyway - just do it someplace where nobody useful will get hurt, like at an anti-gay-marriage rally.]

But even thought it is horribly offensive to nearly anyone religious, Playing Gods is also really funny. For instance, there are five gods that come with the game, and a sixth generic god with a couple blank spots. The sheet of stickers in the box lets you customize that sixth god for whatever you think people will worship - Scientology (represented by a picture of Tom Cruise), Jehovah's Witnesses (with a picture of a finger ringing a doorbell), and Oprah (with a picture of Oprah). Yeah, it's offensive, but it's damned funny.

The game involves rolling a die, moving your god around the aetheric pathway around the world, and using cards to try to kill or convert the sects of the other gods. It's actually pretty straight-forward - you move, and then you interact with the space you land on. If you land on some spaces, you draw a card. Some spaces are portals that let you affect the religious sects on the planet below. And a few do special weird stuff, like jump to another space or steal cards from the other people.

The real fun comes when you get to ruin your opponent's followers with acts of gods (yes, it's lower-case - there are a bunch of different gods in this game, and every one causes earthquakes, mudslides and tidal waves). You play the wrath cards you've run around collecting, and then you watch sects devoted to the other gods fall into the ocean or go up in smoke.

If you want to be a little less aggressive, you can also convert your opponent's sects. There are conversion cards you can play like resurrection and miracles, and then the other god can play cards like prosperity and afterlife, and the god who plays more cards wins. The trick here is that if a god can later come through and kill some of those converted dudes, they'll revert back to their original faith. So there are times when it's handy to kill, and times when it's great to recruit. All things considered, this part is pretty damned fun.

The problem comes in when you try to find the strategy in the game, because there really isn't very much to be had. The die rolls determine what you can do on any given turn, and so you may wind up sitting on a portal to a continent where you're the only god with any followers, and then you do whatever gods do when they're boreed (I don't know what they do. Kill something? Not sure). And to really crank up the luck factor, there's a card called Godkiller, and if you land on the space while holding the Godkiller card, you just point to the player who is winning the game and go, 'sorry, you lose.' It's the most arbitrary player elimination I've ever seen... but it's hilarious.

So the game is a little like Candyland for people who want the express train to Hell. So you can get kicked out of the game with no control over the process whatsoever. So it's offensive, and violent, and twisted. It's side-splitting fun, and I don't care if it has anything in common with chess, because I had a blast playing it. Hell, we had so much fun, we played it twice, even though one player got Godkilled in both games (that's what he gets for trying to win!)

I think the greatest thing about Playing Gods is the point it makes. If you are offended by the concept of this game, you need to lighten the hell up. It's a joke, for God's sake (yeah, I did that on purpose). It's humor and great satire. It points out incredible inconsistencies in the religions we hold most dear (OK, not me, but you might. I'm probably about to be buried in the next mudslide for my personal opinions regarding world religions). It points out how retarded it is to go to war over something as petty as a religious difference. And it makes you laugh the whole time.

As everyone who plays board games knows, no game is complete unless it has expansions. Playing Gods is no exception. The expansion in this case is another little batch of cards you can add to the wrath cards that let you just grab up extra followers (by doing stuff like banning birth control - more Christian sects - or declaring an open-ended war on terror - more Muslim sects) or kill opposing sects (by doing stuff like writing sacred texts in a dead language and complaining that nobody reads them - lose some Hindus). These cards don't add a whole hell of a lot to the game, outside of being damned funny. It's worth getting the expansion just to read the clever crap at the bottom.

One thing that deserves special notice is the production value in this game. Balls Out Entertainment must have hit the lotto, because this game has to cost a bundle to make. The art is perfect. The figures in the game are flat-out gorgeous - easily the most beautiful sculpts I've ever seen on board game pawns (as long as you can find beauty in sacrilege - and I can). The cards are slick and durable. The board is fun to look at. In short, Playing Gods is put together so well, you'll wonder how they can afford to sell you a copy for forty bucks.

Of course, my opinion might be a little biased - I don't believe in any of these religions (except maybe Oprah. How can you not love Oprah? Oh, wait, it's because she's a complete waste of oxygen). So I love being able to play a game that holds up organized religion and says, 'hey, this is kind of stupid.'

Pros:
Great theme (if you don't mind blasphemy - and I don't)
Plays incredibly fast - turns might only last ten seconds
Absolutely hilarious, I don't care who you are

Cons:
Limited strategic options
More than slightly sacreligious (wait, should that be under Pros?)

I think Playing Gods is awesome. If you think it might be awesome, you should go here and get a copy:
http://www.playinggods.com/checkout-2.php
Posted by Matt Drake at 8:32 PM

That sounds damn funny. The figures are awesome.