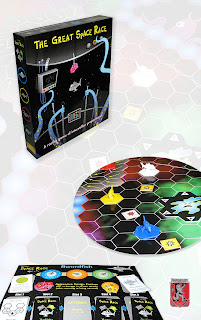 There's something incredibly appealing about playing a stupid bastard. For one thing, when you make a total bonehead maneuver and end up blasting yourself with your own weapons, you can blame it on the fact that you're representing the guy who would have been picked last for the math team. For another thing, you get to make fun of everyone else for being dumber than a bag of hammers.

The Great Space Race, from Kenzer & Co., hits that special spot where you just love to be dumb. Each player takes on the role of an alien pilot in a great race - a race where the losers have their entire species eradicated from the universe. In fact, the whole contest is really just an opportunity for one race of evolutionary throwbacks to avoid complete extinction, by proving that they are slightly less stupid than the other species marked for extinction.

I don't know about you, but that's a theme I can get behind.

The race is played out with action cards. Your pilots can't think fast enough to pilot the ships themselves, so they have to feed their flight plans into the computer, which is smart enough to chew gum and walk (though not necessarily ambulatory enough to do either). You play your action cards face down in the order you want to execute them, and the number of cards you play is based on your speed. High speed, therefore, means you get to play a lot of cards - but it also greatly increases the odds that you'll get knocked off course and driven into a wall, which is hilariously awesome.

A simple race in this manner would probably be a little dull, however, so the galactic overlord who decided to put you in the race in the first place has equipped your ship with weapons. Every ship has mines that can be deployed behind it as it moves, and if you take the time to equip them, you can also add other goodies to your arsenal, like guided torpedoes and dumb-fire missiles and nuclear devices. And if you think it's a good idea for a pilot so stupid that its entire species is marked for extinction to have nuclear devices, then you might really get a kick out of The Great Space Race.

To add to the mayhem, the great galactic overlord had decreed that stupid crap can happen while you're flying around, trying to beat the other ships to the finish line and simultaneously trying to blow them to pieces (which is funny, because the odds are almost as good that they'll kill themselves, saving you the trouble - except that while trying to blast them, it's not entirely impossible that you wind up hurting yourself. Which, again, is hilariously awesome). This mayhem comes in the form of event cards that might get drawn with your action cards, which can result in more wacky hijinks. Snipers watching the race might take pot shots at you. You might fly into a wormhole. And if things go really poorly, you might open up a black hole right in front of you, and God help you and your entire alien species if you can't avoid flying into the black part in the middle.

The best part of all this meaningless violence happens when you blow up another ship, because each ship is powered by a nuclear reactor, and those reactors make enormous explosions right in the middle of the space race track when an opponent is destroyed. You can laugh at your opponent's misfortune as he blows up like the Death Star, but he may have the last laugh when your ship is torn to iron filings by the enormous explosive aftermath.

Reading through the rules, you might be a little intimidated by the heft of the book. There are rules for the black holes, rules for the nukes, and rules for the giant space amoeba that eats space ships. There are rules for the cannons that the overlord might toss into the ring as motivational tools, and rules for running into each other like Nascar drivers in the rain. But once you start playing, you'll realize that the whole thing goes really fast, and is really easy to learn, with just a few things that might send you back to the rulebook (like what happens when a player discovers the Terrible Secret of Space).

If you've ever played RoboRally, you probably have a pretty good idea how this game works. You put down cards to program movement, and then you take turns executing those cards to see how badly you miscalculated. And I'll say this right now - I don't like RoboRally. I've played it three or four times, and every time it just felt like work, and exceptionally unforgiving work, at that.

But I love The Great Space Race. For one thing, action cards often have options, like the ability to change direction on the fly, or choose between two flight paths, or otherwise have a little more control over your ship while it's moving. For another, The Great Space Race has command decisions, for when you're about to fly into a black hole because you miscounted your move three cards back, and really wish you could make a left turn after you pass Neptune. And yet another improvement is the massive player battles that take place, where you're dropping mines and ramming each other into walls and otherwise completely screwing with your opponents. You're not just trying to program a complicated route, like in RoboRally; now you're actively interacting with your opponents, and not just with cleverly planned maneuvers. Now you're firing missiles at them, which is so much more satisfying than just pushing them onto conveyor belts that drop them into holes in the ground.

A word of caution to the soon-to-be fan of The Great Space Race - the components are not awesome. Every bit of art in the game is drawn on a computer, and most of it is pretty clumsy. The cards are too small and too flimsy, and they tend to get scratched up pretty easy. If this were a game from a big company, it would have great cards and cool spaceships and sweet die-cut counters that you press out of a huge sheet of thick, double-sided cardboard so that you could overflow a landfill with the waste. But if it was from a big company, I wouldn't want to play it.

See, half the charm of The Great Space Race is the cobbled-together hilarity. While the rules are excellent, and the game plays very well, the writers didn't take themselves seriously. They know who they are, and they know what kind of game they're making, and the rules are a hoot to read. You'll laugh all the way through, and you'll be relieved that you're not reading a set of rules that Reiner Knizia had to get approved by a team of stuffy editors with half-finished English degrees. The game is funky and fresh, like an 80s rap group, back before rap was all about street thugs and guns and cussing and mysoginy.

Seriously, the only fault I can find with The Great Space Race is the component quality, and if you're the kind of gamer that gets hung up on pretty pieces, Fantasy Flight makes dozens of games with expensive pieces and no soul. The Great Space Race is fun, fast, exciting, funny, and charming. I look forward to playing it again, and that's not something I can say about lots of games I play.

Pros:
Great action game
Combines clever planning and quick thinking
Absolutely awesome theme
Fun and fast, with plenty of ways to discover wacky hijinks
Just plain charming, the way only a game from a smaller publisher can be

Cons:
Components could have been a lot better

I really recommend you get a copy of The Great Space Race. It's a really good time.
http://www.kenzerco.com/product_info.php?products_id=271
Posted by Matt Drake at 6:42 PM

Ah, this one didn't go over well at all when my group tried it at Origins this year. We found it incredibly fiddly and hard to get through--with six players we'd only finished one lap in well over an hour. The whole thing just dragged on and on, which I think is part of the inherent problem with race-style games. Other than something like Pitchcar, these just don't lend themselves well to an atmosphere of excitement.

And the most infuriating thing for was was movement restrictions due to those blasted cards. There were so many obstacles and traps on the board that we often had no choice but to get hit--there were no cards that would allow an escape even if we could see clear paths in front of us.

YMMV, but I couldn't stand this game. And the horrible component quality is really uncalled for. If Flying Frog can put out two top-notch games that compete with FFG or DoW quality-wise, so can Kenzer and Co.

Sounds like you had the same problem I had with RoboRally. Completely understandable.

And I don't think I would want to try with six players. That seems like a frighteningly huge group. We played with three, and it was about perfect.