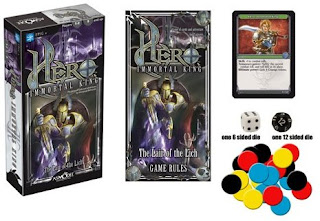 Dungeon games are just about my favorite kind of games - Descent, HeroQuest, the incredibly poorly-named Dungeons & Dragons: The Fantasy Adventure Board Game, even sci-fi dungeon-type games like Siege of the Citadel. So when Asmodee US (just about my favorite game company) announced that they were doing a dungeon game, well, I had to have it.

The 'dungeon' in Hero Immortal King (henceforward shortened to Hero IK, because I'm lazy) is built from a deck of threat cards, with a big mean bad guy at the back. The dungeon master (a title begging for a Wizards cease & desist letter) puts the cards into three piles, and the adventurer player tries to plow through them. Every turn, the adventurer will be faced with three opponents, and will have to choose which one to fight.

At first, this would look almost impossible for the adventurer, because lots of monsters have strength scores you can't roll on a normal die. But the adventurers have ways to improve their rolls, or roll different dice, or otherwise get the results they need to pull off the win. Plus the adventurer can turn in the monster cards he's collected for special abilities or magic weapons, so he can get tougher, which he'll need to be when the gets to the end of the pile of cards and has to fight the boss monster. Play the right card combo, and the heroes might wade through a pile of zombie guards like wet toilet paper. Select the wrong cards at the beginning of the game, and you might find yourself facing a gargantuan dragon virtually guaranteed to be picking his teeth with your femur after he finishes cracking you out of your armor like an Alaska king crab.

The mechanics of Hero IK are smooth, and it plays really fast. You can blow through a whole game in 15-20 minutes, and then bust out another deck and play again. There are three different boxes of Hero IK, each with four different adventurers, different magic weapons and widely varied enemies. You can even mix-and-match the cards to make custom dungeons, and if you decide to go back, all the cards are conveniently numbered so you can separate them out again.

So I've described where Descent and Magic come in, but you might be wondering where the hell I came up with Fist of the North Star. Mostly, it's the art. It looks very much like a bizarre Japanese cartoon. The little girl hero who turns into a werewolf has huge eyes and a small mouth. The orks look like that goofy green bad guy from Dragonball Z. The art is really great, and damned fun to look at, but the illustrator for this game obviously spent a lot of time with his collection of trippy anime videos. Princess Mononoke's got nothing on the weird factor on a few of these cards. I kept looking for the one girl who could break into tears, then transform into a superheroine, then be rescued by her masked boyfriend whose name she didn't know.

Weird or not, Hero IK is a lot of fun in short, bite-sized doses. It's not too deep, and the dungeon master's role is so limited that you can play the game solo, but there's still considerable strategy in picking the right adventurers, then picking the right equipment, then picking the right foes, and then picking the right strategy to beat them. I won't lie and say it's as awesome as Descent, but then, I didn't find myself spending 20 minutes trying to decide how to arrange my adventurers to make sure I had line of sight to every corner of the room, just to discover I forgot about a space behind a rock column that was somehow hiding a wolf the size of a Cadillac.

Cons:
Not much depth
Dungeon master doesn't always have a lot to do

Hero Immortal King is affordable, fast and fun. If you go here, you can collect them all, and you won't even need to send in cereal box tops that you cut off before the box was empty so that the Lucky Charms spill out all over the table when your little brother goes to pour a bowl:
http://www.asmodee-us.com/games/strategy/hero-ik.php
Posted by Matt Drake at 7:41 PM

Oh yea, this one sounds perfect to me, I am adding it to m y wishlist as a must have - sounds very cool, and I like shorter games. Solo works well also, all the better.

I'm going to add this to my buy-list due to your review. Thanks, Matt.