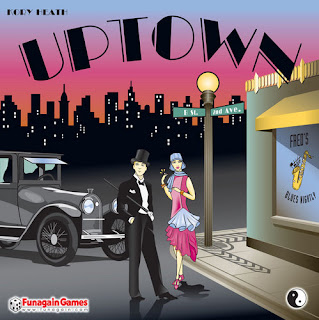 I haven't checked my back records this morning, but I'm pretty sure I'm overdue for a game roast. I need to tear a game into little metaphorical pieces every now and then, just for my own cathartic pleasure, and I've been playing so many awesome games that I just haven't been able to find anything to destroy. Thank God for Uptown.

Sometimes you find a game that is so bad, you wonder why the publishers bothered to make it in the first place. Sometimes you see a theme so worthless, you can't understand why the game has a theme at all. And sometimes you see art so generic, so cheap, that it makes you wonder what kind of production budget was spent on this thing. Sometimes all those things happen at once, and then it's called Uptown.

The theme to Uptown is a Swinging '20s night out on the town. There are little pictures of martini glasses and flappers and stuff. It's very cosmopolitan. The game is decorated with all the best art you can find on Clipart.com. They must have spent at least fifteen bucks on the art for this game. Maybe even twenty. Basically, my kids' allowances could cover the art budget.

There's a Sudoku-style grid on the game board, with 1-9 on the columns, A-I on the rows, and nine different blocks with pictures on them. You've got 28 colored tiles per player, each with a number, letter or picture, and you have to put them in the grid where they fit - your A has to go in the A column, and your skyline picture has to go in the center block. The idea is to get all your pieces to touch each other, and to sabotage the other players so they can't.

Only you don't have much in the way of options, so you kind of just put tiles down and then see if anyone won the game. Keeping your tiles together is more about being lucky with the draw than it is about planning or good placement. It's about as much fun as punching yourself in the asscheek - it's not that painful, but it's not something you would want to do for half an hour. Plus the budget artist who put the game together used a font that's really hard to read, so you can't tell the 1 from the I, and if you turn the I on its side it looks like an H.

To make matters worse, the colors look like they were chosen by someone who was color-blind. There's a boring blue, a bland green, a putrid yellow, a turd orange and a red that looks like an infected wound. There's a difference between 'subdued' and 'fugly', but it looks like the people who bought all the clip art for this game didn't know that.

If you like games with a good theme, Uptown should be as far away from you as possible. I don't know how they settled on a theme of visiting speakeasies during Prohibition, but the theme could have been anything. Anything at all. Find nine pictures that are somehow associated, and you've got a theme that could have been applied to this game. They could have used nine pictures of dead presidents, and then it would have been a little amusing. You could say, 'hey, you just covered my Grover Cleveland!'

So it's not a good game, but let's say you're snowed in at the cabin. You can't get the door open, the TV is broken, you're stuck with four other family members and the only game you've got is Uptown. In this case, you could give it a shot. But after one play, you'll want to switch to charades or blind man's bluff. And if you get hungry, you'll want to eat the pieces of the game before you start cannibalizing your cousins.

In order to offer a balanced perspective, and in the interest of full disclosure, I should point out that there are people who like this game. You can find a bunch of people at BGG who call it things like 'pleasant' and 'quick filler'. So apparently not everyone thinks Uptown is an ugly turd of a game, but I still say that in a market where you can buy literally thousands of games, don't buy a pleasant quick filler. Buy a good game. Hell, buy Incan Gold. It's fun. This one is not.

Well, I don't know about you, but I feel better now. It's fun to say bad things about bad games. I'll probably be back to good games on Monday (I'm planning on talking about Risk: Star Wars, which is a total blast), so soak up the mean-spirited fun while you can.

Pros:
Small, so it won't take up much space in your recycle bin

Cons:
Horrible colors
Cheap art
Virtually no decisions to make
Minimal opportunities for planning
Just not a fun game at all

If you want to get Uptown, get your head examined. These people can help:
http://www.nimh.nih.gov/
Posted by Matt Drake at 6:58 AM

Well I guess if you say it is a good light filler game I should add it to my wish list - he he.

Are you sure this is not A Knizia - sounds a lot like Atlanteon with a different theme - but just as bad?

That's weird. I've only heard good things about Uptown before your review. Of course, it's an abstract strategy game with a ridiculous little whiff of theme applied, but most other reviews I've read and heard about it still say that it's at least interesting and a little bit fun.

But then again, you're rarely what one would call "normal", are you Drake?

Your comment on the ClipArt and art budget makes me giggle every time I think about it... that and the Pro's for this game.