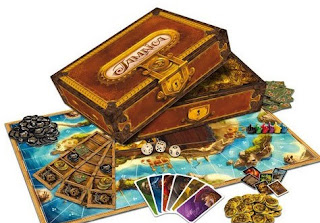 Pirates are notoriously disorganized. And apparently, they're a little eccentric, as evidenced by their desire to arrange a race around the island of Jamaica. You might think they would be more interested in sinking Spanish ships and stealing their gold, but no, they just want to race. If they can pick up gold that people leave just laying around, that's just gravy.

So in Jamaica, each player picks a pirate captain, lines up on the starting line, and hauls ass around the little Caribbean island. Of course, just going really fast is not enough - these are, after all, bloodthirsty buccaneers, and not the Swedish yacht racing team - so along the way, you'll shoot at your fellow racers, steal gold, raid and pillage. In the end, you win by having the most booty, which means that if you had Jennifer Lopez on your ship, you would definitely be the best pirate ever. Unfortunately, J-Lo is not in the game, so you'll have to provide your own models from Black Entertainment Television.

Every turn, one player rolls two dice and puts them on the board. Then each player picks one of his or her action cards (there are totally chick pirates, who may or may not have their own sweet booty), then performs the two actions according to the dice. So if the dice show a four and then a two, and you choose to move and then load food, you'll move four spaces and load two crates of tasty grub (red beans and rice seem to be the most likely, if you're attempting to gain booty. And yes, I intend to wear out this lame booty joke).

The trick is that you won't be able to just run every turn. For one thing, not every card has the option to move forward, and some even make you go backward. For another thing, you may need gold to pay off port officials, or you may need food to survive a voyage at sea. If you can't afford to move forward, and you try anyway, you could wind up going backwards. Which is nice for those pirates behind you, especially if you've got great booty. The girl pirates may not be as excited, but these are iconoclastic rebels - they might dig chicks anyway, and still be happy with the view of your booty (I may have to back off this gag for a bit - that last crack was way too obvious).

Every now and then, you'll end up at a pirate lair, where some sloppy miscreant has dropped his treasure. I don't know what kind of pirates are just wandering around Jamaica and dropping their ill-gotten gains overboard, but apparently it's pretty common, because there are a lot of treasures you can steal.

One thing that is worth mentioning is that Jamaica is a gorgeous game (though for a red-blooded American male, it's not as great as the view of awesome booty). The art alone will make you want to play. A really great illustrator was hired to do the comical and colorful art, and just putting the game on the table will make you want to open it and flip through everything. If you line up all the action cards end to end, in the right order, you'll get one long and hilariously awesome painting that must have cost the game's publishers a huge pile of change to commission.

And it's not all window-dressing, either - this is a really fun game. It's damned chaotic, but it moves pretty quick, has lots of tough decisions, requires considerable insight, and rewards the player who plans ahead. Bad luck can sink you completely, but since it plays so fast, you won't mind losing if you get routinely kicked in the booty.

So if I've learned anything about pirates, it's that they are weird and disorganized, and that it's good to get booty. Of course, I knew that last one before I played Jamaica, but it's nice to have it reinforced.

Cons:
Can be extremely chaotic
More luck than many people will find agreeable

If you like booty, you should get a copy of this game:
http://www.asmodee-us.com/games/family-games/jamaica.php
Posted by Matt Drake at 12:21 PM

How many people did you play with? How do you think this would play with 2 people?

I played with three, and had loads of fun. It's not like Risk, where you need a group to enjoy it. I think you could have plenty of fun with two.

it's a wonderful game: not really a depth one, but the fun is guaranteed !!! everyone wants to play it once or twice when i have friends at home, so its success speaks for it.
Its best, IMHO, is with 4 or more players, since the battles are more frequent ... with two player you've to use a third boat (bot, the dead) to simulate the presence of another player and it's easy that one of the players can take the lead and to win in no time (and no fun) ;) ...

I ahve had my eye on this one for a while, but the Booty jokes put it over the top - I must have this one - I am a red blooded American and Hence I love me some Booty - sold.