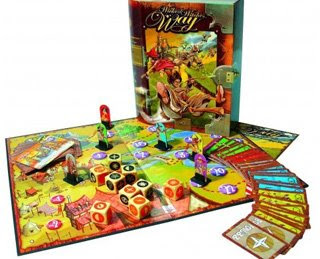 I don't understand why all witches can't be hot. I know, tradition gives them warty noses and stringy hair and bad crotch hygiene, but I want them all to wear fishnets and plunging necklines and saucy little pointed hats. When I see a witch, I want to be all 'hubba hubba, she can cast a spell on me anytime!'

There's only one hot witch in Wicked Witches Way. Worse, there are no dude witches (I think the correct term is 'warlock,' but I don't care, because there are none of those, either). There are five broom-mounted witches having a race, and one is a hottie in a red dress, three are gross old hags, and the last one is actually one crazy old bird who got turned into four different, hideous goblins.

Now, in all fairness, that witch in the red is pretty smokin'. She doesn't get an advantage, or anything, except maybe she would be better at seduction. But this is a broom race, not a beauty contest, and just like everyone else, she has to power her flying broom with magic spells, not curvy legs and a great ass.

Wicked Witches Way is a competition pitting these five witches (or however many players there are) against each other in a broom-flying race. To power those brooms, the witches have to whip up spells. It doesn't hurt if they do a little fancy flying, too - the judges love to see you do a barrel roll on a broom.

So every turn, the witches collectively take a peek at the magic book, to see what elements they can use to bust out those flying spells. The book is represented by nine wooden dice, each with different red or orange spell pictures on them. One player rolls the dice into the box and then lets everyone have a look. Witches have to memorize the pictures in a hurry, because when one person thinks he can build a formula, he slams the box closed and everyone has to play cards to show how well they remembered the various components in the box.

This is actually trickier than it sounds, too - your formula can't have both orange and black symbols, and if there are symbols that appear in both colors, they're not allowed. You have to build your formula in your head before that box closes, and it's not hard to make mistakes. Mistakes mean your witch falls off her broom. Since there's only one attractive witch, the odds are a little scary that you might get a glimpse of some really heinous varicose veins as the old bag takes a digger.

Getting a few elements right lets you move forward, but a perfect formula lets you either draw a magic card or jump ahead a couple extra spaces. Those magic cards are the real spoilers, too - they let you get more time looking at the dice, or make two formulae, or move the lead player backward, or lots of other stuff. You can also use the cards to do aerial maneuvers, which the judges think are great. I would only think they are great if the witch doing them is the hot one - would you want to see Beatrice Arthur in Olympic figure skating? Not any more than I want to see a geriatric witch flip upside down while wearing a dress and riding a broom, thanks.

Crossing the finish line first gives you a good shot at the win, but it's not a sure thing. That prune-faced old bag behind you might have a few tricks up her sleeve, and if she's pulled off some aerial acrobatics without making the judges hurl, they might just give her the win. Then all you'll have left to do is go home and soak your bunions. Unless you're the hot witch, and then you've probably got a date.

Quick aside - the box for Wicked Witches Way is about the coolest you'll ever see. It opens up like a book, and half of it is a box for rolling the dice. The dice are sweet, the board is cool, the little witch standups are hilariously illustrated, and the cards are great. The whole package is just plain fun.

Wicked Witches Way is one of my favorite games from Asmodee US. My family breaks it out and plays all the time. My wife always picks the hot witch, and that's fine by me, because then I choose the freak goblin witch so I don't get stuck with the one with really frightening nose hair and boobs that hang down to her navel. It's basically a memory game, but one that requires some strategy, some attention, and the desire to completely hose your friends.

But I don't know about those ugly witches. There ought to be a law that says that if you're so dangerous you could turn me into a toad, you have to be hot to make it worth my time.

Cons:
Ugly witches in dresses have no business flipping upside down

Wicked Witches Way is a great game for some light gaming. You can get one here:
http://www.asmodee-us.com/games/family-games/wicked-witches-way.php
Posted by Matt Drake at 7:34 PM