The Spread the Word contest has come to an end. If you meant to send me pictures, you took too damned long and you missed your shot. And when you lazy slackers see how many entries I got, you're going to kick yourselves.

First place goes to Hendal. This hard-working prophet of Flames spread flyers all over the place. And when I say 'all over', I mean he went international. There are game stores in Costa Rica sporting Drake's Flames flyers. Panama City gamers can find reviews of all kinds of games now, even if they can't read them all. And by calling on some friends, he got flyers up in the States, too. He easily earned first place, and I'm delighted to give it to him. Here are just three shots of his work in action: 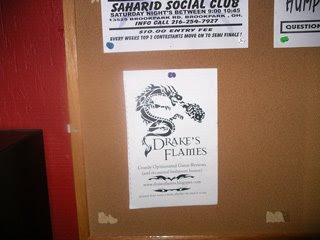 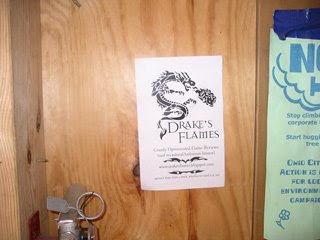 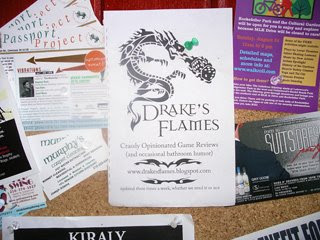 Second place was also a really easy call. Because Hendal's buddy Kruvallox (my apologies if I slaughtered your screen name, Kruv) did so much work, I'm awarding him a prize just for hooking up his friend. He did banner work, and I mean to thank him for it.

Third place went to the man known simply as Jim. Jim works at Hasbro, and took this shot: 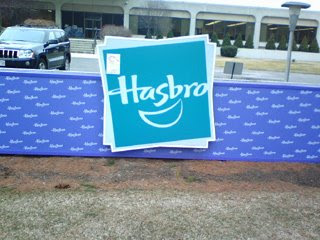 OK, so while that is an awesome place to have my flyer up, it should be pretty obvious that it couldn't stay there. So Jim posted another flyer, right in his work space: 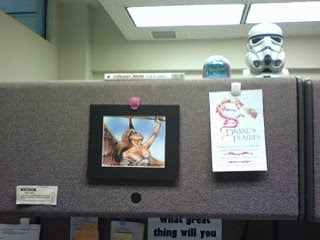 Jim has assured me that Rob Daviau has a copy of the flyer on his desk. Not only that, but Rob read my review of Risk: Black Ops. So that sure as hell earns a prize. Big-shot game designers read my reviews. Shouldn't you?

I'm awarding an honorary fourth place, even though I didn't even get ten entries. For that matter, I didn't technically get three - this last one is a Photoshop job. Either that, or Malechi works in a zoo and knows some really good printers. He may not have spread the word to people who can read it, but he did send in this awesomely creative shot: 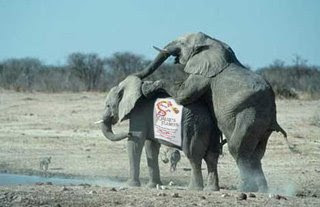 For that, I've decided to send him a prize, too.

So you see, if anyone else had bothered to snap just one shot - just one! - you would have been guaranteed of winning something. You might not have been able to beat flyers on two continents, or personally handing a flyer to world-renowned game designers, but even a flyer in the bathroom at your local watering hole would have won a prize.

I would like to thank my Mom my Dad and those those little people who have helped me along the way, thank you , thank you - Read all about it Hendal WIns ElfBall........... Oh yea, how sweet it is.

Can I ask for 2 prizes for showing in 2 coutnries?

Um, thanks! I look forward to whatever I end up getting, and Hendal, congrats on the Elfball!