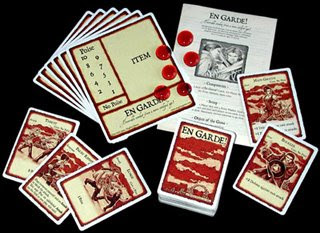 I hereby declare the first week of March to be Slugfest Week. As it is now Slugfest Week, we will be required to beat each other about the face and body with our fists. Or, if that doesn't sound entertaining, you can just read three reviews of games from Slugfest Games, which interestingly enough, are mostly about hurting each other. So the name works either way.

We'll start the week off with a review of En Garde, a game of dueling with swords and stuff. Then we'll expand to Kung Fu Fighting, where I will make multiple references to 70s music. Friday's the big day, though - The Red Dragon Inn will be the anchor for the week, so that we can find out what happens when a bunch of sociopathic adventurers has a drinking contest.

All of these games utilize a similar mechanic - card-driven competitive play designed to reduce your opponent's key statistic while preserving your own. In En Garde, that statistic is called Poise. Poise is your ability to stay cool and calm in a swordfight. You're not trying to make your opponent bleed profusely, you're just trying to get him to look like a buffoon. Of course, a bullet to the face has been known to make a guy look pretty silly.

Every player starts with ten Poise and a handful of cards. There are attack cards like 'Thrust' and 'Slash', and blocking cards like 'Parry' and 'Parry Riposte.' There are attack enhancements and cards to press the attack, items like cloaks and bucklers and a main gauche, and cards to recover your poise. On your turn, you play an attack (if you have one) on someone else, preferably someone who has what you have decided has altogether too much Poise.

Then your opponent plays a card to block your attack or reduce the damage, if he has one. In some cases, he might even counter attack and hurt you on your own turn. You might then try to block his card, if you have blocking cards, or try to press the attack and discard his blocking cards, to make sure he takes the hit. When all else fails, you can bust out the pistol and really make someone look bad, because nothing ruins your dueling jacket like bullet holes and spreading bloodstains.

This goes on around the table until there's only one player left. This isn't a particularly subtle game - you play the cards you have and see if you can be the last man (or woman, there are women on the cards, so you might get girls to play with you) standing. It's about as deep as a puddle in a parking lot. The meager strategy that the game provides is all in the form of picking on the person who appears to be leading, and discarding cards you don't think you'll need to see if you can get the cards to keep yourself in the game for one more round.

As I play En Garde, I'm reminded of one of my favorite filler games from several years back, a slightly disturbing game called Lunch Money, where little kids beat the piss out of each other in what has to be the most horrifying recess fight ever. Neither game has much finesse. It's appropriate that En Garde comes from a company called Slugfest, because the game is little more than repeatedly whacking the bejeezus out of your friends.

Now, before you despair of seeing any good games reviewed this week, I'll point out that I'm going for a big finish. No reason I can see to start with the big winner and shoot my load, then be trying to persuade you to stick around all week to cuddle. En Garde may not be a very good game, but I'm saving up for bigger and better. Just a taste here - Kung Fu Fighting is better, with plenty of opportunity to make jokes about disco music. The Red Dragon Inn is even better than that, and in that game, the jokes write themselves.

But this review is about En Garde, so I'll finish with it. And I'll tell you that you probably should not buy this game. It's not really very much fun, because the winner of the game is usually going to be the one that consistently draws the best cards. If that's not you, you're not looking at a very enjoyable evening. And the bullet holes will really piss off your tailor.

Pros:
Cool art
Could be fun if you don't want to think

Normally when I pan a game like this, I'll give you a link to a municipal dump or a chemical waste plant. But since I'm reviewing three from the same company this week, here's a link to the guys who make it:
http://www.slugfestgames.com/games_eg.php
Posted by Matt Drake at 6:32 AM

I use to fence in school, so this doesn't sound that bad to me to be honest. A game where I don't have to think, heck I got lots f friends who don't think very much so this could be perfect for me to introducd them to a game.

Of course with out dice I am always worried weather I will like it or not, but then I love Politico and there are no dice in that!