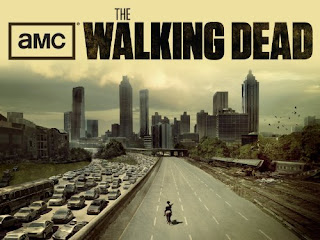 OK, I've held off long enough. I was all, 'everybody has already seen The Walking Dead. We don't need a review of a show that anyone with two brain cells is already watching.' And then the mid-season finale was last night, and I was all, 'holy crap, this show is the best frikkin show ever,' and lost all restraint in my need to talk about how awesome The Walking Dead is.

I'll get this out of the way first - I'm not reviewing the comic book. Seriously, ever. I love it, and can't wait for December 12 to find out what happens in the next issue, but it's the kind of book that when you ask a comic book nerd what he's reading, he'll go 'Walking Dead,' and you both shrug and go, 'well, yeah, duh.'

And I wasn't going to review the show, either, for a very similar reason. If you're a zombie fan, you have to be watching this show, so what more is there to say? But after the episode I watched last night, I just can't contain myself any more. The Walking Dead is fantastic, and I simply have to tell everyone who will listen that they ought to be fans, even if they already are.

If you are a fan of the comic book who (for no possible reason I can fathom) is not watching the TV show, you should know that it follows the comic only as a general guideline. There are characters on the show who are not in the book. There are people in the book who are not in the show. There are different scenes, different stories, and completely varied orders of events. Most importantly, you never know who will die. There's no guarantee that just because your favorite lasted 50 issues in the comic book, he can't get struck down halfway through season one (not that I'm saying that happened, or even referencing a particular character or incident. It's just an example. No spoilers have been revealed).

What I can tell you, without giving anything away, is that the show is impeccably timed and incredibly tense. The storytelling is precision perfect, often gut-wrenching, and thoroughly addictive. The second half of season three won't be out until February, and man, I can't wait. It's not even just because of the horrible cliffhangers they left us last night. I want the show to come back, and not just because I want to find out what happens. I want to spend more time with the people on the show.

And that's really what has me hooked - the characters in The Walking Dead are beyond believable. I watched eight seasons of Lost, and those overly attractive castaways were never more than puppets on strings. But in The Walking Dead, I feel like I'm spending an hour every Sunday night hanging out with a bunch of people I actually know. Even the ones I hate, the ones I hope will die - I still feel like I know them, like I'm not watching from a recliner in my living room. It's like I'm sitting on a filthy plastic chair at the side of the room while they argue about where to go next.

It takes a lot more than great writing to make me this connected to a show. To feel like these people are this real, they have to LOOK real. Even the attractive people are dirty most of the time, and not all of them are good-looking. They tend to be fit, but if they were lard-asses, zombies would have caught them by now, so I can see past the fact that all the women have killer asses. They look like normal, believable people. They have bad hair days. They grow filthy beards. They wear torn clothing and sleep on mattresses that I would swear I can smell - and they smell like dog farts.

The effects and makeup are also excellent. Just one flapping rubber mask, just one off-kilter contact lens, and the illusion would break down. Not shatter, necessarily, but weaken. And yet every episode just continues to build the feel that you're not just watching this horrific world. You're in it. You can feel the sticky Southern heat, smell the rotting corpses, taste the bland oatmeal. Everything about the show brings you into their world.

I would be lying if I said the show was flawless, though. Early on, there were problems. It took a while for some of the people to grow on me, and especially around the first half of season two, the show was flat-out slow as hell. The pacing was completely off, and it was almost work to sit through another hour just to turn to my son and go, 'man, is anything ever going to happen on this show?' That problem is GONE, by the way - this season has been absolutely phenomenal. Not too slow, not too fast, just the right amount of development mixed with just the right number of gruesome deaths. But if you're plowing through the reruns, keep in mind that you have to get through some slow patches to get to the genius.

And for a long time, they were also having a lot of trouble giving me a reason to give a crap about some of the characters. One guy in particular was so irritating that I just wanted a zombie to eat him so he could be interesting (if you're watching the show, you may know who I mean. Be cool and don't spoil it). Some people seemed to be deliberately stupid. Some were just intentionally unpleasant, beyond what normal people would be. The writing has been so amazing this season that it's not hard to forget the low points from before, but they were there nonetheless.

Finally, I do have one more problem with The Walking Dead, and it relates to both the show and the comic. I am seriously over the 'people are the real monsters' drama-queen bit. Other zombie-related entertainment has shown that you can definitely tell a good zombie story where human beings are not mostly douchebags, but it still plays as a recurring theme. At this point, it seems like it's written by a bunch of crappy poets sitting around a coffee shop on a Tuesday night listen to an open mike and saying, 'deep, man, deep.' The best zombie entertainment is allegorical, but this particular allegory has been done to death.

However, The Walking Dead obviously has no intention of altering its direction, and while I don't agree with it completely, I'll be damned if I'm not entirely hooked. I can't stop watching. I know there's heartache ahead. I know there are deaths and sorrow and pain, and yet this particular story has 100% of my attention. There's no guarantee of a happy ending, and I don't care, because in this case, it's not about the ending. It's about the people and how they change as the show progresses. That, and how they totally kill a ton of different things. That part is also awesome.

Oh, one more reason I'm reviewing this tonight - there's a big marathon coming up on AMC. If you're behind on the show, or missed an episode, or just want to dive in at the beginning, you can get completely caught up when they run every episode over New Years Eve and New Years Day. Yes, it's a month away, but that will give you time to get your order in with your cable company. Because if you're not watching The Walking Dead, you should be.
Posted by Matt Drake at 7:17 PM

"I watched eight seasons of Lost, and those overly attractive castaways were never more than puppets on strings. But in The Walking Dead, I feel like I'm spending an hour every Sunday night hanging out with a bunch of people I actually know"

I feel exactly opposite as you. When Charlie (LOST) died, for instance, I felt very sad because I knew him a lot. When I watch TWD I don't feel it. It seems everybody looks the same, all flat characters... I miss LOST a lot!

Amen brother. Man, is she nothing like her comic-book counterpart.