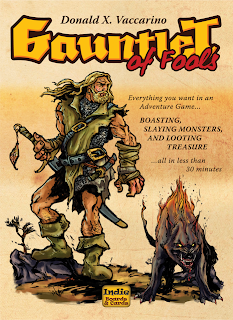 Time is short tonight, so I'm going to tell you about a game that's short. Mostly because it's easier to write about short games, being as there's only so much you can say.

The game is called Gauntlets of Fools, and it's 20 minutes of laughing and getting stomped by terrifically dangerous monsters. You need at least three people to play this madcap romp, but to really experience the wackiness, you'll want more than that. So basically, if you're at a party and everyone is half-trashed, and someone goes, 'HEY! We should play a game!' and they are much louder than is really necessary because they are a wee bit soused, you can say, 'I know just the thing!'

In Gauntlet of Fools, each player is going to pick a dungeon delver to venture into the dungeon and delve. The dungeon will kill each of you - it's a guarantee. The only question is, when the last of you falls prey to traps and monsters, who will have the most money? It's a stupid question, if you ask me, because money is a moot point if you're all dead, but that may be why the game is not called Gauntlet of Reasonable People.

Then you go into the dungeon, and at this point, monsters start popping out and beating the crap out of all of you. Some of you might kill the monsters, and then you will get paid. Others will instead be mercilessly beaten and fed to sea monkeys. You will roll an awful lot of dice, and if enough of you have been drinking, someone at the table will have absolutely no idea what's happening. That's OK, really, because you don't actually need to have a firm grasp on what you're doing to play Gauntlet of Fools. It's also not called Gauntlet of Teetotalers.

Eventually, every last one of you will be dead. Not literally, of course, unless you get alcohol poisoning. That actually happened to a girl I knew in college. Well, I didn't know her first hand. I heard about it from a friend. Thinking back, I don't think he knew the girl, either. In fact, I would bet that it didn't actually happen at all, though I suppose theoretically it could.

Anyway, you're all dead, and now you count up your money (or you let someone more sober than yourself count your money). The one who got the most loot wins, but in a game this short and silly, everyone who played and had any fun at all is the winner. It's a silly, shallow game that's fun enough that we played it several times in a row, and I will definitely keep it handy for my next drunken binge party. It could be called Gauntlet of Party People, but it's not. It's Gauntlet of Fools, which is probably a catchier name, anyway.

Pros:
Fun and fast
Light and silly
Will probably lead to some laughing


Cons:
Not a whole lot of game, but it's fun anyway

If you want to learn more about Gauntlet of Fools, then good luck, because outside of a random scattering of game reviews, I can't figure out where you can get a copy. It looks like you can preorder it somewhere. Maybe.
Posted by Matt Drake at 5:39 PM

First of all, I love your blog, I read every new entry, be it boardgame related or not. One question: do you feel that the game drags after the character selection?

Thanks for reading, Jamuki. And no, we didn't see any dragging. Hell, it ends in 15 minutes. We kept having to say, 'slow down, dangit! I can't figure out who died!'

So no, no dragging for us.

Hey man, Great Blog.
I stubled across it while browsing the web for some deadlands rules, and my keywords popped up in your deadlands reloaded review.
i've been reading your new stuff ever since :)

And after this review i just had to buy the game! (its still shipping though, hard to get english games in germany...) i get jumpy everytime i hear a car stop near the house...

keep up the good work!