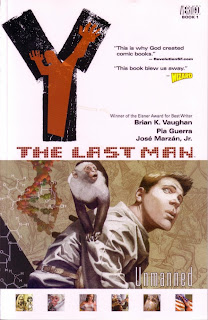 If you're not a huge comics nerd (and I swear, I'm not… well, not any more), you may have missed Y: The Last Man. It's not a superhero book. In fact, there's almost nothing super about it. Some of the people are total bad-ass hard-ons, but for the most part, it's a story of regular people in irregular times.

In the first issue of this incredible series, every living creature on the planet bearing a Y chromosome dies at the same time. They're talking, walking, flying planes, holding press releases, fighting battles - and BAM, every single male of any species pukes blood and drops dead. Men and pigs and cows and horses, all simultaneously toast.

Except Yorick and his pet monkey.

That's the premise of this incredible book, but it's not entirely what the book is about. Like the best science fiction, Y: The Last Man uses an impossible situation to discuss issues that resonate with readers living in a completely normal world. Gender roles are the most obvious starting point, but the story expands to touch on depression and religion, nationalism and crime, power and greed. This is a thought-provoking, intelligent tale that proves beyond any doubt that comic books can be incredible, if we just quit trying to put gunfighters in brightly colored spandex.

As soon as Yorick discovers that he's the last surviving male on the planet, he sets out from Boston to find the love of his life, who is unfortunately in Australia on a research grant. That's a bit of a commute for a guy who can't just jump on a plane, due largely to the fact that there are not really very many planes running any more. Most of the pilots were dudes, and the women who are left are not trying to get American Airlines back to JFK International.

The result is a sort of buddy movie crossed with a road movie crossed with a comic book. A few fascinating characters emerge as the story unfolds. We meet Agent 355, the assassin-spy assigned to protect Yorick on his travels. We meet Dr. Mann, whose work with cloning may unlock the secret to saving the world. There's Alter, the Israeli leader who intends to capture Yorick and make her country the only nation to survive the apocalypse. And Hero, Yorick's sister, is a troubled woman attempting to cope with the dark deeds she commits when she allows herself to fall prey to her doubt and despair.

The characters in Y: The Last Man are, by necessity, mostly females. After all, if there were more than one male character, the title would be all wrong. But even male readers can identify with the living, breathing survivors of a world-changing catastrophe. We can see ourselves in the drug-smuggling ship's captain, the tough congresswoman, or the small-town survivors who make the best of a tough situation.

And the story doesn't just show us villains or heroes. Like the best stories, sometimes the bad guys are completely likable, and sometimes the good guys are total douchebags. Hell, for most of the characters, there is no good or bad. There's just people doing what people do. And this realistic approach to a fantastic situation makes the story believable and compelling and impossible to put down.

The best part about reviewing Y: The Last Man is that the story is done. It ran for about five years before wrapping it all up. The result is sixty comics that tell an incredible tale. You can buy it in ten collected editions, but those are only in print, and these days, the only way I buy comics is on Comixology. If you want it that way, you can only get the issues one at a time, but that's actually better, because this way you can see all the amazing work that was done on the covers.

I don't read many comic books any more. Most of the comics being made today are about superheroes, and I'm done with superheroes. They don't make any sense, their timelines are completely screwed, and they keep trotting out the same tired characters rather than letting them die off and making new ones. I have exceptionally high standards when it comes to comics (except for Darkbrain - their comics are horrible, but the porn is hilarious), and so when I find one that's worth reading twice, I like to crow about it. If you haven't read Y: The Last Man, you're in for a treat. And if you have, go back and read it again. It's that good.
Posted by Matt Drake at 9:05 PM

That's some fine thoughts on a very good comic.I'm not as picky as you, but I do agree that most of the super hero genre is quite ridiculous, and should be avoided. ..unless you want it ridiculous, of course. Sometimes I enjoy it totally over the top!
But, the area where I think comics really shine nowadays is noir. Guys like Azzarrello, Aaron and Brubaker really churn out some good gritty crime stories. Have a look at 100 Bullets, Scalped or Criminal and you'll see what I mean. Might be your cup of Nepalese goat milk...might not...but the stuff is serious.
Also, have a look at the now finished series DMZ by Brian Wood. Tells the story about the USA in a civil war, New York caught up in the middle. Has all the distinguishing marks of a good scifi story you mentioned above...except that this doesn't really feel like scifi, it's a wee bit too close to home for that.
Anyway, thanks for the blog, it's great reading.

P.S. Any review of the mighty Caylus coming up?

Not much chance of a Caylus review, Mike, since I don't own it and don't want to play it. But I will definitely check out the comics you suggested. Noir comics are exactly my cup of Nepalese goat milk.